Alexander Parker and Tim Richman, with cartoons by Zapiro
Share
0:00 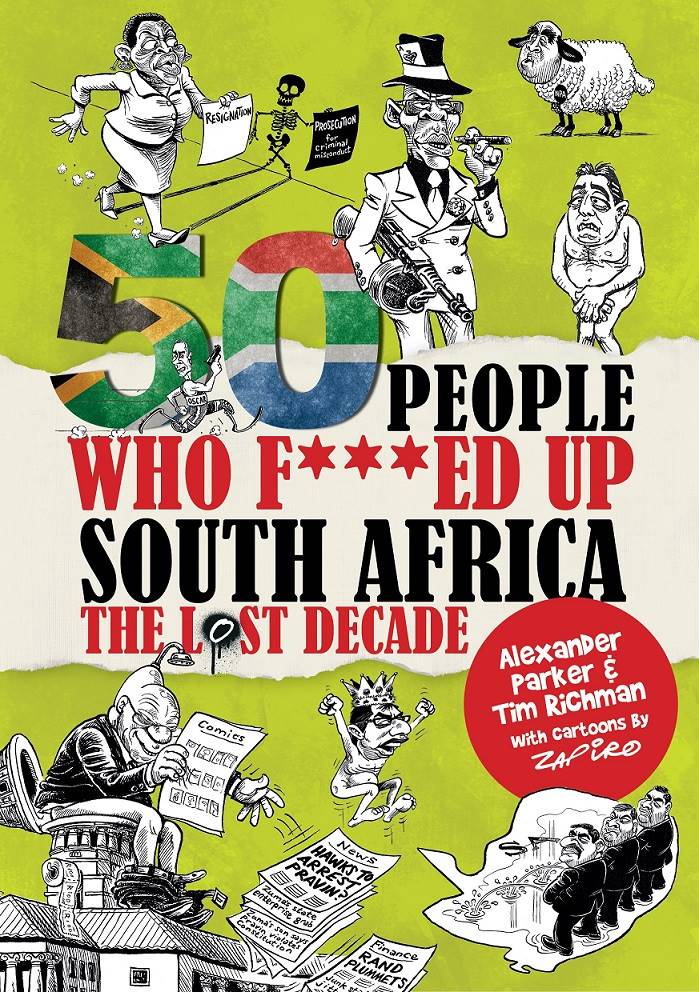 From Shaun Abrahams to Mosebenzi Zwane, 50 People Who F***ed Up South Africa is filled with the architects and beneficiaries of state capture, who defined the lost decade.

In this extract, Ace Magashule takes centre stage and the result is a readable, accessible, entertaining overview of South Africa’s recent political and socioeconomic landscape. Because sometimes humour (along with a clearly painted picture) really is the best coping mechanism.

Alexander Parker and Tim Richman, with cartoons by Zapiro

Today Zuma has been reduced to Zooming with his son and Gupta employee Duduzane to try and work ersatz Bell Pottinger narrative diversions into the public discourse and calling in sickies from Cuba to avoid his corruption trial and Zondo commission appearances. It’s worth remembering what an untouchable and all-powerful king Zuma once was not too many years distant and comparing it to the pitiable figure he is today. Where he once instilled bogeyman fear in the hearts of South Africa’s middle class, today it is contempt.

Now the most powerful person in South Africa is a far more contested position. Nominally, it is the president, Cyril Ramaphosa, and we hope that really is the case, at least most of the time. But often it’s hard to say. During much of the Covid-19 lockdown it was apparently Cooperative Governance and Traditional Affairs Minister Nkosazana Dlamini-Zuma, and often it seems to be the last person holding the microphone at the end of an ANC national executive committee meeting.

The most dangerous person in South Africa is rather easier to discern – a man with a load of power in his own right. That would be Elias Sekgobelo Magashule, otherwise known as Ace, a nickname from his soccer playing days.

As we have seen in the previous entry on David Mabuza, all indications are that the ANC national conference at Nasrec in December 2017 was as rigged as a tall ship. Depending on which account you read, the voting for the ANC top six was either very corrupt or entirely corrupt, and the accusations that Mabuza was paid to support CR17 contrast well with the counting anomalies that saw Magashule pip Senzo Mchunu, from Ramaphosa’s slate, to the position of party secretary-general. We’ve seen that Ramaphosa claimed his presidential victory over Dlamini-Zuma by a mere 179 votes, but Magashule squeaked in by just 24.

And here’s the thing – when they added up the votes for Magashule and Mchunu, they found that 68 had mysteriously gone missing. Those in the Zuma faction agreed to a recount only if all the evening’s voting was to be tallied again, but Ramaphosa hedged his bets, choosing to bank his position as ANC president rather than risking more votes going missing the next time around. The result is that the power dynamics of South African politics have been in a purgatorial state of paralysis ever since, to the detriment of the entire country. Whereas Zuma used to have Gwede Mantashe as his wily secretary-general enforcer, Ramaphosa has a similarly sharp operator working against him. The reason for the antagonism is not hard to surmise. Magashule is a man swathed in allegations of corruption, fighting the same battle that Zuma has fought for the past 15 years and using the same strategy to avoid going to prison – stay in power to retard the formal course of justice.

Unlike some of the players in this book – Zuma, for one – Magashule’s liberation credentials are not as glorious as they might appear on first blush. Whereas Zuma spent a decade on Robben Island with Mandela, and long years in exile and as an underground guerrilla, Magashule’s past is less impressive than he would have you believe.

This is the take of author Pieter-Louis Myburgh, whose book Gangster State did to Magashule in 2019 what Jacques Pauw’s The President’s Keepers did to Zuma two years earlier. Which is to say, it aired a lot of dirty laundry.

Magashule was brought up by his mother in the township of Tumahole in Parys in the Free State in the 1960s and 1970s. He was a teenager when the Soweto uprising came to town and when he went off to university he felt drawn to student activism, but he appears to have overstated his efforts somewhat, claiming to be co-founder of both the Congress of SA Students and of the United Democratic Front, and to have been charged with high treason when it seems he was arrested for accidentally being in the wrong place at the wrong time. In the mid- to late-1980s, he went into “internal exile” in Hillbrow, where he developed a reputation as an effective fundraiser, but also as a possible requisitioner of those funds. This is a reputation that he has, it seems, never shaken. Magashule ascended steadily through the provincial ranks of the Free State, first as leader of the ANC and eventually as premier. By the time the era of Zuma came around he was, according to Myburgh, as keen as any of the pirates of Polokwane to have the Scorpions disbanded to avoid being prosecuted.

As one of the loyal dukes to Zuma, Magashule thrived in the Zuma years, coming to dominate the Free State as Mabuza did Mpumalanga and the third of the Premier League, Supra Mahumapelo, would the North West. Magashule was said to have an interest in all activities in his province, earning the nickname Mr Ten Percent as he went about his business which, perhaps unsurprisingly, saw the Free State fall into general administrative decline. It is no surprise either that he struck up cordial relations with the Guptas at an early stage. His son, Tshepiso, was employed by them from 2010, and Magashule has been pinpointed as a key figure in scandals including the Vrede/Estina dairy farm and asbestos heist.

Today he is seen as the gangster heir of the Zuma mafia, a man who benefited from Zuma’s patronage and protection and is willing to return the favour. In the three years since his acutely suspicious appointment as secretary-general of the ANC, he has conspired with Zuma in public, defied Ramaphosa’s explicit instructions not to use the ANC as a platform to defend himself (against allegations in Gangster State), and aligned himself with serial liar Carl Niehaus and the ragtag rabble of the Umkhonto weSizwe Military Veterans Association. In August 2020, in a display of remarkably tone-deaf chutzpah, he put his name to an ANC press release headlined: “We dip our heads in shame over Covid-19 corruption” shortly after his sons, Tshepiso and Thato, had been shown to have received nearly R3 million in Covid-19 tenders. Three days after the press release was circulated, Thato was reported to have bought a R2 million BMW X7.

Many observers see Magashule as a leader, if not the leader, of the Zuma faction, in diametric opposition to Ramaphosa. Analyst Ralph Mathekga prefers to see him as belonging to his own “interest group”. Either way, the tiny gains we might have made as a country in the three years since Ramaphosa became ANC president and our supposed “new dawn” began pale into what might have been with a supportive, or simply uncooperative, secretary-general to rely on.

Today we sit hobbled – Covid-19 notwithstanding – for the sake of an ace gangster and 24 miserable votes.

Sign-up to our newsletters and get the latest results and info in your inbox.
Voting Booth
The Electoral Commission of SA (IEC) has accepted the report by former Deputy Chief Justice Dikgang Moseneke proposing that South Africa’s local government elections be postponed to February.
Please select an option Oops! Something went wrong, please try again later.
I was looking forward to the elections in October
42% - 161 votes
Postponement makes sense
45% - 172 votes
They should be later than February
12% - 47 votes
Previous Results
The best of 2020
Can you guess who featured in our most popular articles from 2020?