There are reportedly over 4 million South Africans diagnosed with bipolar disorder, but still the subject is taboo. Now Samantha Smirin has written a powerful memoir about her lifelong journey through mental health institutions, treatments and medications before arriving at a place of acceptance and transformation.

I  don’t ask my daughter Samira to write a letter. I can’t. But she volunteers to write something anyway – her feelings about my bipolar.

I was fine the first time I saw my mom was sick ’cause I didn’t actually understand what was happening and I really just wondered where she was. Granny, Daddy and Grandpa told me she was on holiday; they lied to me – that sort of thing. I was very confused and uncomfortable when I went to see my mom in hospital with Daddy because she wasn’t herself and she didn’t seem to know me and no one had told me what was going on. Like one time when Granny and Grandpa took me away and wouldn’t let me call her and said she was away, or at my other granny’s farm; I was told she was on retreat and I couldn’t talk to her. Parents shouldn’t lie to children. They should tell them what’s happening so they aren’t left oblivious to things.

They should tell them straight up about what illness a person’s got.

They should tell their children so they can be prepared when they see their mom’s sick. Parents should tell children the truth and not make children think that mental health is a taboo topic that shouldn’t be spoken about.

As I started to understand my mom’s illness, it was more and more upsetting. I knew she was sick and not herself and I was scared for her that she may make irrational decisions that might hurt her. I knew it wasn’t her but it was weird to see her differently and not herself at all. If she has an episode, I am scared for her, but now I know she has an illness where she can sometimes be scary but I know that she will always return to herself.

It’s made me feel scared but it’s also taught me to cope with other things in my life and get things into perspective and see how much worse things could be. It has taught me resilience and grit.

My mom is a loving, compassionate, happy, kind person who’s willing to drive me to the garage at night to get chips and who thinks rationally most of the time.

There have been times like when the neighbour decided not to let her daughter be friends with me because she thought my mom was unsafe, but she was ignorant of bipolar. I haven’t told my friends as she has not had an episode since I met them at my new school, but I think they’d be fine with it. I also haven’t told them because it’s not my story to tell necessarily – it’s my mom’s.

I feel happy for my mom that she is writing a book as she has had a lot of interruptions in life and hasn’t been able to follow through and complete something like this. I’m happy she is sharing something with the world so other people can cope and understand that bipolar doesn’t define a person but is just some part of them.

My mom used to be in denial, embarrassed about it, but now she has accepted it and is trying to help others, so she is brave, but it shouldn’t be something you need to be brave about because mental illness shouldn’t be taboo.

My mom will always be my mom and her illness doesn’t define her, and when she’s sick she’s still the same person deep inside.

I love my mom regardless of her state of mind. I want to say to other children whose moms or dads have bipolar that I know what it feels like to want to cry, but over time it gets better. They always love you, they are just sick, that’s all.

I always say that the kids of this new generation will be the game changers. Just like that, Samira disarms stigma in her letter. She states – very clearly – that illness is illness regardless of its form. I am honoured to be the mother of a child with such practical wisdom and humbled by her unquestionable love for me “regardless of my state of mind”. That’s my girl.

Rafael’s is the last email I receive. Along with Samira’s, it’s the hardest one to read, because he’s the adult closest to me. Rafael replies to my request for how my illness has impacted his life in his insightful, measured, impeccably non-judgmental way. Being the person that I turn to for help, in the times when I find myself to be in life-threatening free fall, he’s come to see telltale signs.

Given what followed, I appreciate his honesty when he relates how, when we first start seeing each other, I tell him that I suffer from bipolar, but that he never truly understands what it means. To him it conjures up a person perhaps a little more emotional than usual, with occasional intense emotions and mood swings. Maybe someone who is considered ‘difficult’ by others. He thinks it sounds about right for a creative person. So one night, when I tell him that I’ve stopped my medication a few weeks earlier, he says, “Go for it.” That is before he understands the illness he is dealing with.

He contextualises my episodes starting when I’m engrossed in intensive work or creative projects with a high degree of concentration, stress and mental and/or emotional stimulation. He writes of how I become “tunnel-visioned into the ritual of a work project or an artwork” to a point where I “become detached from reality”.

When this happens, I become over-analytical and introspective and my thoughts start to cycle around. It’s almost as if “you try to crystalise some universal thoughts that keep eluding you”.

As I read this, I flash back to myself, glued to a glaring, blaring television in London, perched on an olive velvet couch flicking from channel to channel and noting plot points in television shows, trying to distil an intrinsic essence by finding similarities in their structures. I remember the mounting frustration as my thoughts and ideas fly faster than I am able to keep up.

He tries to explain it as writing a paper the night before it’s due and, with the pressing knowledge of a deadline looming, having the sense that everything’s swirling round and making less and less sense. His analogy sounds mild and almost laughable to me compared to the disintegration of my mind.

Related Links
Ben Okri: The first revolutionary act is to ask questions
Our country’s wonders ... through books
Book extract: Talk to your kids about sex predators
Share
Next on City Press
Read away the lockdown 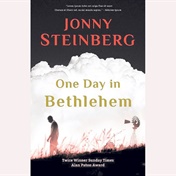