Book Review | Everything you ever wanted to know about craft beer 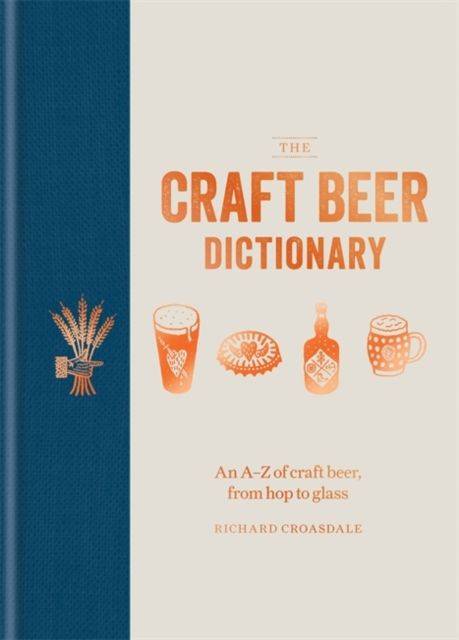 This dictionary is a must have for beer lovers. Picture: Supplied

The Craft Beer Dictionary is probably the best dictionary of any sort that you will come across. Compiled by award-winning beer expert Richard Croasdale, this stylish and in-depth guide will help you get to grips with the craft beer revolution.

Hundreds of entries cover every aspect of the craft beer world, from ingredients, brewing and storage though to tasting notes. The book is beautifully illustrated and expertly laid out making it a delight to read.

In the engaging introduction, Croasdale speaks about growing up in a sleepy English town and his first encounters with beer as a young person. Friday and Saturday nights were about Colesberg, Heineken or if you were feeling flush Stella.

He soon decided that beer was not for him and moved on to whiskey.

It wasn’t until the early 2000s after moving to Scotland that he discovered the delights of the well brewed regional beers that was so common there. Croasdale set out to capture is beer journey and to alphabetise it.

In the beautifully laid out pages he outlines the main process techniques and pieces of equipment in brewing beer – both in the commercial brewery and at home. He also covers the basics of beer appreciation and culture and explains what you can encounter along your journey.

In assembling his dictionary, he guides you through the multibillion rand industry which has become craft beer. In attempting to answer questions, he covers the scale of ownership, the quality and the authenticity of beer and so forth.

He notes that the craft beer industry is not a break from the past, but a beer movement of rediscovery, and even an evolution of styles and techniques that were almost lost in the mid-20th century.

Croasdale observes that there is a palpable sense of excitement around beer today and he hopes that it won’t fade again.

Let’s look closely at one entry – Head: “Whether it’s a brilliant, creamy white meringue or a sticky, lacing topping, the head of a beer is a vital component in flavour, aroma, aesthetics and generally the whole beer-drinking experience. People get very worked up about it. The head is made up of bubbles of beer-enclosed gas which precipitate from the liquid as it is poured and rise to the surface.

“Molecules called surfactants in the beer gather around the bubble’s wall, limiting the amount of gas that can get inside and keeping it small. These same surfactants also contribute to the bubble’s ability when it reaches the surface, allowing the head to stay solid rather than just fizzing away. Hundreds of entries cover every aspect of the craft beer world, from ingredients, brewing and storage though to tasting notes. Picture: Supplied “Surfactants are special to beer, as they result from the combination of the molecules present in the grain [particularly malt and wheat] and hops. One without the other would not produce the same result.”

What a piece of writing! Sounds more like this should be a literary entry rather than beer entry.

Let’s look at another entry Trappist. “In many ways, the monastic brewers of northern Europe can be seen as the forefathers of modern brewing, having transformed it from a casual, often haphazard process into a true craft.

“In today’s beer world, none of these ancient monastic brewers are more revered than the Trappists, an order dating back to France [and an abbey just outside the town of Soligny-la-Trappe] in 1662. A splinter of the Cistercian order, which itself arose from a faction of the even older Benedictines, the Trappists arrived in Belgian in 1802, after being driven out of France during the French Revolution.

Some of the entries are more light-hearted than others (beards, beer mats) which is a good antidote to the pompousness that sadly engulfed parts of the world of modern brewing

“Settling there, occupying abandoned abbeys and building new ones, the Trappists began a strong culture of agriculture and self-sufficiency that persists to this day, at locations including Orval, Westvleteren, Chimay, Achel, Rochefort and Westmalle. Like Lambic or Champagne, Trappiste is a protected appalachian with a strict legal definition: in this case, the Trappist beers must be brewed under the direct supervision of monks at a brewery within the boundaries of a monastery.”

The book is cleverly illustrated, easy to navigate and often references other entries to provide a well-rounded guide to your chosen topic.

Some of the entries are more light-hearted than others (beards, beer mats) which is a good antidote to the pompousness that sadly engulfed parts of the world of modern brewing.

This will not be the only book an authentic beer nerd will own, as a beer nerd will probably have lots of others already! The average beer-loving person, with more than a passing interest, will find this book extremely helpful.

We live in a world where facts and fiction get blurred
In times of uncertainty you need journalism you can trust. For 14 free days, you can have access to a world of in-depth analyses, investigative journalism, top opinions and a range of features. Journalism strengthens democracy. Invest in the future today. Thereafter you will be billed R75 per month. You can cancel anytime and if you cancel within 14 days you won't be billed.
Subscribe to News24
Related Links
Book Extract | Death Flight – how the apartheid government got rid of bodies by flinging them...
Book Extract | Recession, Recovery and Reform: South Africa after Covid-19
Book Review | Will South Africa be okay?
Next on City Press
Book Extract | What happens when love is an addiction?