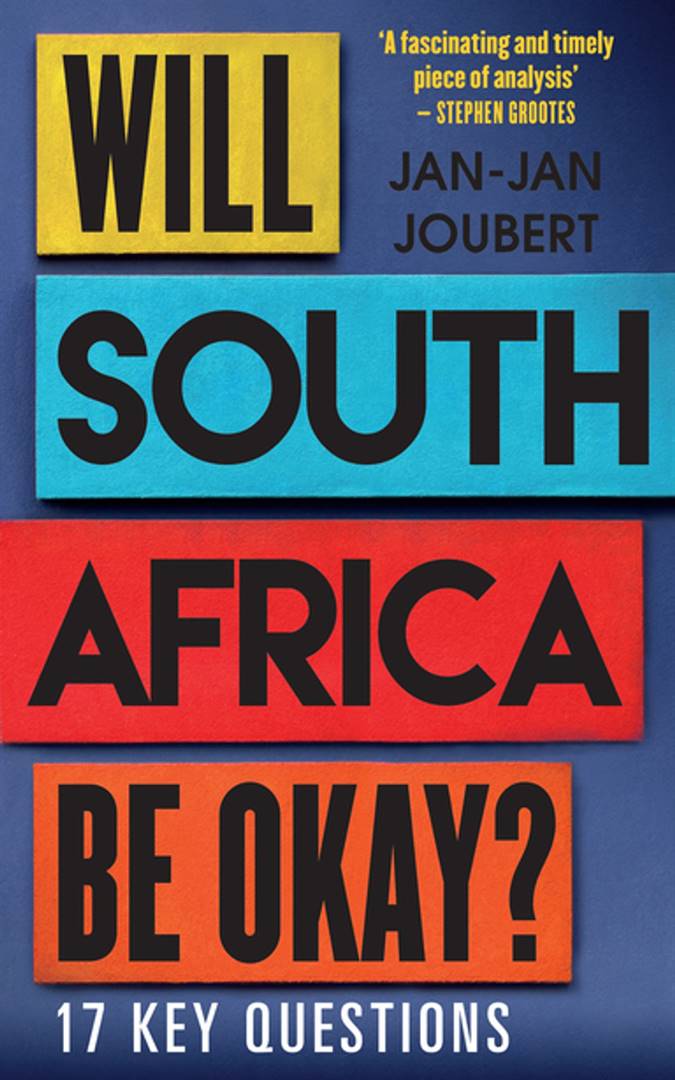 In the heat of the night, you take off your shoes, enter a mud hut full of things – animal remains of sorts – organised to instil fear in you and a belief that you will find help for all your troubles.

The smell is unbearable, nevertheless you squat on the goat rug.

You put down a currency note with the face of the great father of the nation.

The prophet of doom takes an ex-genital pouch of an animal bull, and you blow your soul in it and then she/he spills the dead bones to let them tell you of your future.

But today I read Will South Africa be Okay? by veteran political journalist Jan-Jan Joubert, as he asks not the prophet of doom but takes a deep look and scrutinises the state of our nation and tries to foretell the future.

He answers in a comprehensive manner 17 key questions with honesty and integrity – but most importantly humbleness – and a great degree of respect to the fathers, the mothers and siblings of this nation to take heed to his words.

One can feel the understated love that Joubert has for this nation and the worried state of his heart. He is crying, begging for the right actions to be taken.

But Joubert neglected, or rather excluded, two very vital and deeply important questions. Firstly, how to remunerate a freedom fighter? City Press editor Mondli Makhanya is quoted as saying: “The ANC is no longer a liberation movement but a common source of income for its members.”

And ANC’s Free State spokesperson Thabo Meeko is quoted: “People are pursuing personal interests because, at all costs, they want to be employed. They want to be deployed, they want to be given tenders. We can never allow or agree that the ANC must be divided because individuals are not happy about the democratic outcomes of the ANC process.”

Secondly, how to fight corruption?

Clearly the governing party has no definite way of dealing with this chronic illness. We have had many commissions of inquiry – at the expense of the taxpayers – from the Truth and Reconciliation Commission to the ongoing Zondo commission – most are used to sugar-coat our reality.

I am waiting for the outcomes, recommendations and implementations of the Zondo commission’s report.

This book is an analysis of the milieu of these national chronic illnesses. The opening question: Why do people keep voting for the ANC? Joubert fights to get to the mind and soul of an ANC voter in light of these chronic ills, but fails.

Personally, I feel these two questions primarily got us where we are today.

They find these connections and disconnect them, then they get paid underhand and they reconnect immediately.

We have national cable theft for which Eskom is footing the bill. But we have never had a police unit to specifically deal with cable theft.

Then there’s the fact that you can pay your way out of a traffic offence. These little ills go on and on up until to the highest offices, becoming a national chronic illness.

This book is an analysis of the milieu of these national chronic illnesses.

The opening question: Why do people keep voting for the ANC? Joubert fights to get to the mind and soul of an ANC voter in light of these chronic ills, but fails.

Another chronic illness is the analysis of President Cyril Ramaphosa and the effective consequences of one fateful afternoon long before this dawn when a young unionist went to a golden mansion in Brenthurst.

The details of this meeting are curtained but they affect us every single day, like the air we breathe.

The national minimum wage is another suicide of the governing party.

In all state-owned enterprises (SOEs) the governing party subcontracts services – tenders – but the service providers rarely adhere to the minimum wage rule. And even here, the all mighty unions are powerless to do anything.

This book is a damn good read. In Will South Africa be okay? Joubert doesn’t give a straight answer. Unlike the prophet of doom, who will state as a matter of fact that you are in the abyss

Then all SOEs are laid bare. At the top, our sole power utility has become a chronic illness to the nation.

Out of the leadership we have, Joubert chooses real leaders.

Twelve in total, only three from the governing party – and our president did not make it onto the list.

Then there are other ills relating to our race relations, comments and feelings that we all have about each other that some of us are brave enough to state in public.

The psychiatrist can better deal with rather than us victimising those who came out the closet.

Joubert questions the integrity of our electoral system but concludes with factual reasoning why the DA lost four seats in Parliament and then identifies where those four seats went.

This book is a damn good read.

In Will South Africa be okay? Joubert doesn’t give a straight answer. Unlike the prophet of doom, who will state as a matter of fact that you are in the abyss hanging from a rope and the strands are breaking.

But like Joubert, the prophet of doom will give you things – recommendations.

Joubert’s are thus: “To ensure that South Africa will indeed be okay, we must start with ourselves. Government has its role and its duty, but we must beware not to shift all responsibility. We need to always remind ourselves that blessed are the peacemakers, for we shall be called the children of God.

Share
Next on City Press
Andrew Mlangeni: My heart bleeds for South Africa