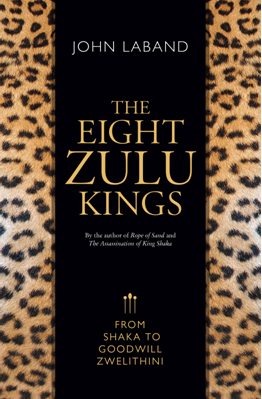 In The Eight Zulu Kings, historian John Laband examines the reigns of the eight Zulu kings from 1816 to the present. In this extract, the focus is on King Goodwill Zwelithini and the Ingonyama Trust as Laband looks at the Zulu monarch’s control over the land.

The Ingonyama Trust is central to Goodwill Zwelithini’s continuing control over the land in KwaZulu-Natal and to his influence over the people who occupy it.

Successive colonial and apartheid pieces of legislation were inimical to individual land ownership by Africans in the reserves set aside for them, so while Africans occupied such land, they did not own it, and it was held in trusteeship by the national government.

In KwaZulu, uniquely among the apartheid-era homeland states, the national government effectively loaned such land to the KLA to administer (along with its occupants) on its behalf.

When the Abolition of Racially Based Land Measures Act 108 of 1991 repealed all previous land legislation it did not undo its consequences.

Consequently, in KwaZulu the land in the former reserves occupied by Africans was not given over to individual black ownership but remained under communal land tenure and continued to be administered by the KLA.

On the very eve of the first democratic, non-racial national elections (and in what some commentators have seen as part of a deal to encourage the IFP to participate) the KwaZulu government passed the KwaZulu Ingonyama Trust Act 3KZ of 1994, which came into effect on 24 April 1994.

The Act ensured that the land occupied by Africans in the geographic area of the former homeland was not returned to the trusteeship of the national government.

Instead, it established the Ingonyama Trust to be the custodian of all the land hitherto managed by the KwaZulu government.

The result was the KwaZulu-Natal Ingonyama Trust Amendment Act 9 of 1997, which came into operation on 2 October 1998.

A Board of Trustees administers the affairs of the Trust and is made up of the Ingonyama (the king) and eight members appointed by the Minister of Rural Development and Land Reform in the national government, after consultation with the king, the premier of KwaZulu-Natal, and the chairperson of the KwaZulu-Natal House of Traditional Leaders.

At the time of writing, the chairperson of the Board was Judge Jerome Ngwenya.

The land administered by the Trust is considerable, making up 26.9 per cent of KwaZulu-Natal, equivalent to 2.8 million hectares.

Black people living on Trust land are issued with Permission to Occupy certificates, which grant them a form of tenure.

In terms of section 2(3) of the Act the Ingonyama himself is the sole Trustee of the land, and the Ingonyama Trust Board understands this to mean that the Trust land vests in the king ‘as trustee on behalf of the members of the communities defined by the Act’.

Senzo Mchunu, the ANC premier of KwaZulu-Natal between 2013 and 2016, undertook to begin fundraising for the maintenance and renovation of the Zulu royal palaces, and to help realise their tourism potential with the aim of uplifting local communities.

At the same time, he sternly insisted that the hitherto ineffective Royal Household Trust had to come up with aggressive revenue generation and fundraising to augment government funds.

Indeed, the point has been vigorously made that it is high time that the royal house employed its status and exercised its influence to fundraise energetically.

That way it would contribute positively to its livelihood and fund its lifestyle instead of asking for more and more out of the public coffers.

When in 2015 the king and the royal family grudgingly accepted that financial cuts in poor economic times were unavoidable, the IFP opposition in the province loudly complained that ‘royalty in KwaZulu-Natal is being trampled upon by the Office of the Premier’.

That indeed seems to have been King Goodwill Zwelithini’s fundamental attitude too.

In July 2017 he publicly insisted with some vehemence that he was ‘entitled’ to the annual budget derived from tax revenue allocated to the Royal Household, and brusquely demanded: ‘Don’t Zulus pay taxes, am I not supposed to get this tax from my subjects?’

This is a deeply troubling statement, revealing that at times the king deludes himself into believing that he somehow exercises the sovereign powers of his pre-colonial royal ancestors, and conveniently forgets that he reigns as a ceremonial, constitutional monarch, and only because Parliament permits him to do so.

Nor in an objective sense is anyone his ‘subject’ since, in a modern parliamentary democracy such as South Africa, we are all citizens with our individual rights guaranteed by the Constitution.

Of course, that does not prevent people from deciding to regard themselves as King Goodwill Zwelithini’s ‘subjects’ as well as being South African citizens, but that is a subjective choice and cannot be imposed or enforced.

Taxpayers currently have no choice in funding the royal house because the central and provincial governments allocate some of the revenues they collect for that purpose.

Yet, to what extent are these putative Zulu ‘subjects’ content to see their taxes spent in this way?

No definitive answer is possible without a proper poll being conducted, but it is fair so say that support for the monarchy is strongest in conservative, rural areas, and is most firmly based in northern KwaZulu-Natal, in the territory that was once the Zulu kingdom.

After all, Zulu-speakers south of the Thukela have not been ruled by a Zulu king since the Voortrekkers defeated Dingane 180 years ago.

It is legitimate to speculate, therefore, how long taxpayers with no special attachment to the monarchy, but increasingly incensed by the royal house’s

profligate lifestyle and deep sense of entitlement, will tolerate their taxes being poured into King Goodwill Zwelithini’s coffers.

Never should it be forgotten that South Africa’s sovereign Parliament could always amend the legislation that recognises Goodwill Zwelithini as a king and that allocates him taxpayers’ money for his maintenance.

Until such time (and who knows if and when it will come to pass) it is fair to enquire what King Goodwill Zwelithini does in return for the millions he receives, and whether it is money well spent.

We live in a world where facts and fiction get blurred
In times of uncertainty you need journalism you can trust. For 14 free days, you can have access to a world of in-depth analyses, investigative journalism, top opinions and a range of features. Journalism strengthens democracy. Invest in the future today. Thereafter you will be billed R75 per month. You can cancel anytime and if you cancel within 14 days you won't be billed.
Subscribe to News24
Related Links
Mondli Makhanya: King Zwelithini stokes fires of Zulu nationalism
Zulus won’t sit and watch while major decisions are made about their land – Zwelithini
King Zwelithini gets another doctorate for ‘notable contribution to society’
Next on City Press
Mbeki-stalgia | Thabo Mbeki: The Dream Deferred