It’s been two years since the archetypal musician Bra Hugh Masekela passed away, but the impact of his art remains.

So much so that his work is still being engaged with and sampled in all of South Africa’s good studios. And this is being done with his 2002 record, Thuma Mina.

The messaging behind this remix involves a call to all real patriots to truly live out the ideals housed in our Constitution.

The aim of the release is to inspire a way out of the multipronged predicament of soaring incidents of gender-based violence, corruption and the long road to an efficient and functional economy.

That and the year of the Covid-19 pandemic led Constitution Hill, the Hugh Masekela Foundation and Flame Studios to come together for a collaborative remix – a people’s version.

The song will feature his core band – Johan Mthethwa, Fana Zulu, Cameron Ward, Godfrey Mgcina and Leeroy Sauls – as well as artists the legend respected and shared ties with.

The original is as cinematic as you might expect. Yes, we’re dealing with the medium of sound and yet Bra Hugh’s horn paints a vista of nostalgic hope. One particularly popular politician even made the term thuma mina (send me) into a slogan.

All the more reason to remake this song as a reminder of all the broken promises. 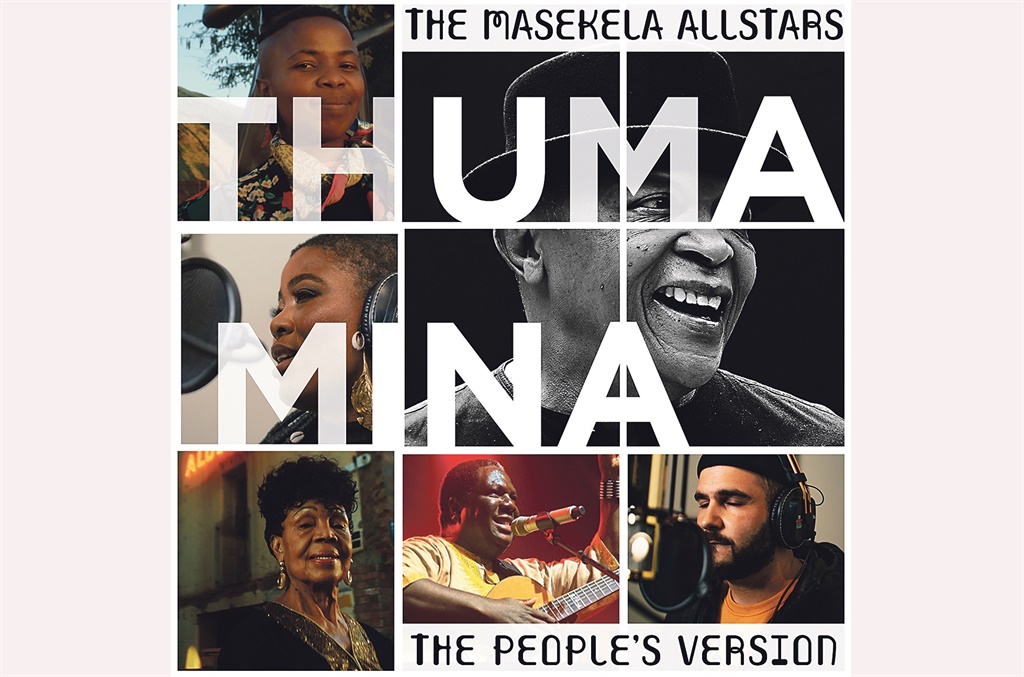 This idea had to be steered by a super producer or two. Enter JB Arthur and TKZee’s Zwai Bala. Bala shares a special connection with Bra Hugh, who frequented his studio in Rosebank.

“I share a special bond with his family, you know. For them to put my name forward and say they’d like me to do it is an honour. Whatever I can do in the name of someone who stood for the things he did is something I am in line with. I learnt from him personally, too,” says Bala.

Being allowed to doctor a Masekela track comes with a responsibility to somehow make it better. It might not be said, but we all know it to be true.

How did the producer manage to keep the old flavour while introducing new ones? Selema Writes, much like his uncle Bra Hugh Masekela, can’t stand seeing our heritage being abused, and his contribution to this song draws on that Pictures SupplieD

Bra Hugh’s nephew Writes has been tasked with representing hip-hop on this remake. Masekela is his mother’s brother and played a huge role in shaping his approach to creativity.

Writes recounts: “I think the most important lessons that I take from having him as an uncle are his pride in being an African; his sense of duty around ensuring that we preserve the heritage of Africa; and that we share that heritage with the next generation and create spaces where we can celebrate it.”

The fiery rapper, who is arguably one of the few out-and-out conscious lyricists we have, gave props to Yugen Blakrok and other artists like her who are adored abroad but not locally. But he also took aim at what some might say is the ceiling of local hip-hop.

“In South Africa, I would say that we don’t have conscious hip-hop because we live in one of the most unequal societies in the world,” Writes says.

“And what that creates is a necessity for survival. The need to survive becomes one of your primary motivating factors. And so even when people venture into music, they subordinate the music to survival.

“I mean, you see it when an artist such as Nasty C makes a song called Steve Biko and it’s all about sex and money. And nobody who has any kind of weight to their voice comes out in public and says this thing shouldn’t be accepted.”

His criticism is as tough as you might expect of Bra Hugh’s nephew, and this energy is exactly what he brings to this song as the youngest person involved. To even the keel and rein in the unadulterated fire of the young rapper are veterans Mahlasela and Kubeka. Speaking to us from her home in Joburg, Kubeka remembers her friend fondly, as they started out in the industry at the same time.

“He was a very happy soul and a very giving, very generous man. Very kind but very hard. And he took his work seriously and took himself seriously. He didn’t compromise and he wasn’t apologetic about who he was or what he was doing,” she says.

Mam’ Abigail says Thuma Mina has always been a song she marvelled at because it’s political and somehow spiritual.

“We come from an era of pain, suffering, tears and blood. Worse than this ... not that I’m undermining where we are today. We’ll survive this [too] because of where we come from. If you didn’t gain strength and courage and wisdom from that era, then I’m sorry, guy, I’m sorry, sweetheart, but you are going to disappear.

“We fought spiritually, mentally and physically. And we are here today over a cup of tea. Learn from that.”

The song and video were released on streaming platforms on Friday

Related Links
Why Manu is a world star
‘I was terrified performing on stage’ – Sho Madjozi
Do your beats bang? Enter this search for SA’s next major producer
Share
Next on City Press
Ancestral Voices | The story of Bertie Ncaphayi