DJ Zinhle brought out Kairo on stage at Huawei Joburg Day after her set.

Celebrated music producer and entrepreneur DJ Zinhle brought out her daughter Kairo Forbes on stage at the third annual Huawei Joburg Day in the Park on Saturday.

The festival, held at the Johannesburg Botanical Garden in Emmarentia, was a fun family day under the sun which was quite fitting for the DJ to bring out her little celebrity daughter.

The crowd erupted with cheers when Kairo was brought out after Zinhle's electric set on stage. No stranger to big crowds, Kairo handled herself quite well as she held on to her mother while waving to the 15 000-strong audience that sold out the venue. Among other hits that the DJ spun on the decks, she also brought out Tamara Dey who performed the duo's hit song 'Colours'.

Catching a brief moment with her backstage, Zinhle said preparing for her performances is always hard mental preparation, particularly for big crowds like Huawei Joburg Day.

"We rehearsed a lot for this show. It's a lot of rehearsals and mentally preparing yourself because standing in front of so many people is very scary," she giggled. 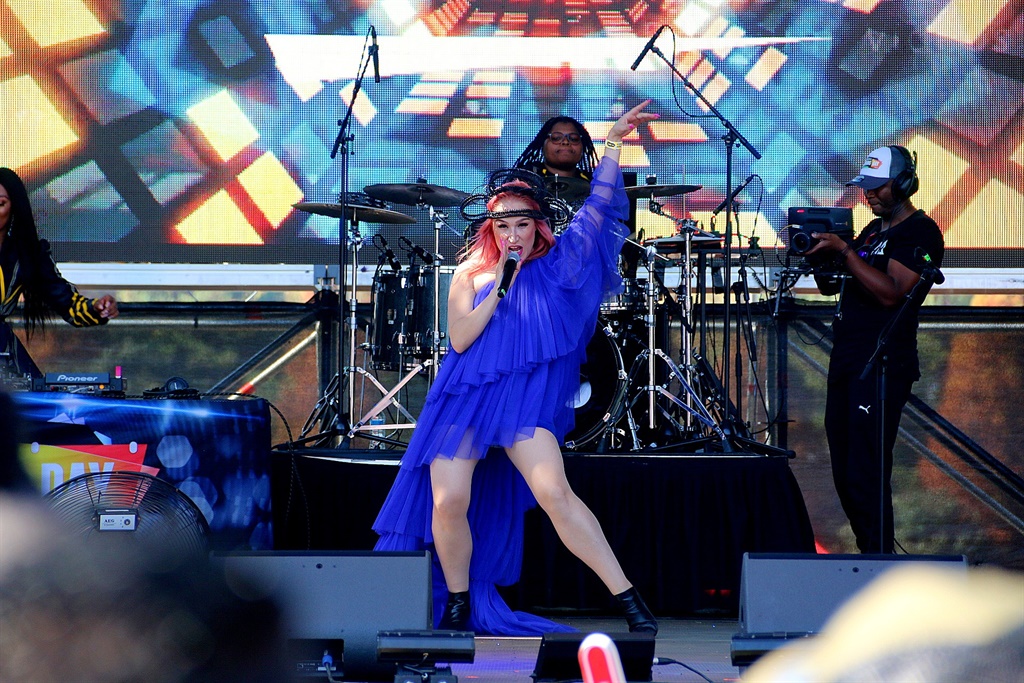 Tamara Dey brought the Autumn vibes with the performance of hit song Colours.

On putting together her all-female band, she said: "It's very hard, I won't lie, it's so tough because it's a different aspect of performance that I've really never been involved in or have experience in. But we're building it slowly but surely; I was with Khethiwe on the drums today and she was amazing". Zinhle remains a popular choice in the calibre of DJs to invite to events such as Huawei Joburg Day as her longevity in the business speaks for itself.

"Everything you want success in takes a lot of hard work and consistency, but it also helps to have a vision so that you know what you're working towards," she said.

Other major highlights from the festival were the iconic Kwaito group TKZee who got the crowd up in good spirits reliving their classic hits from the trio's 90’s debut album Halloween. Other exciting acts that had the audience on their feet and dancing the afternoon away were Mango Groove, Sho Madjozi, Matthew Mole, Mi Casa, Holly Rey, Beatenberg and Tresor, Sun EL and Simmy, Shortstraw and Easy Freak. Beatenberg had young and old dancing and singing along.

While some enjoyed food and drink at designated spots, picnickers got in some friends-and-family time which showed that the Huawei and 97.4 FM collaboration has become more than just a music festival. Two dads and their kids dance during a Mango Groove performance.

Hit-maker Prince Kaybee was the final act of the night whose set felt a bit too short as he left the crowd asking for more.

The Huawei Joburg Day in the Park Autumn edition definitely lived up to its predecessor and set the tone for the Spring edition coming up in September, which you should not hesitate to mark on your calendar.

Akhram Mohammed, Huawei SA's Chief Technology Officer said that the most important thing for Huawei Joburg Day in the Park and 94.7 FM was that it was truly South African.

"It brings out the South African spirit. For Huawei, as a brand, South Africa is the fastest growing market globally and it’s about giving back to South Africa. Irrespective of language or beat, people connect to music and that’s why it is important for Huawei to be a part of events like this.

"Our phones are specially about creating memories that will stay with the users for years to come. We’ve partnered with 947 on this event for a few years now and we look forward to many more,” Akhram said.