Do you know where to get the sharpest haircut in town? 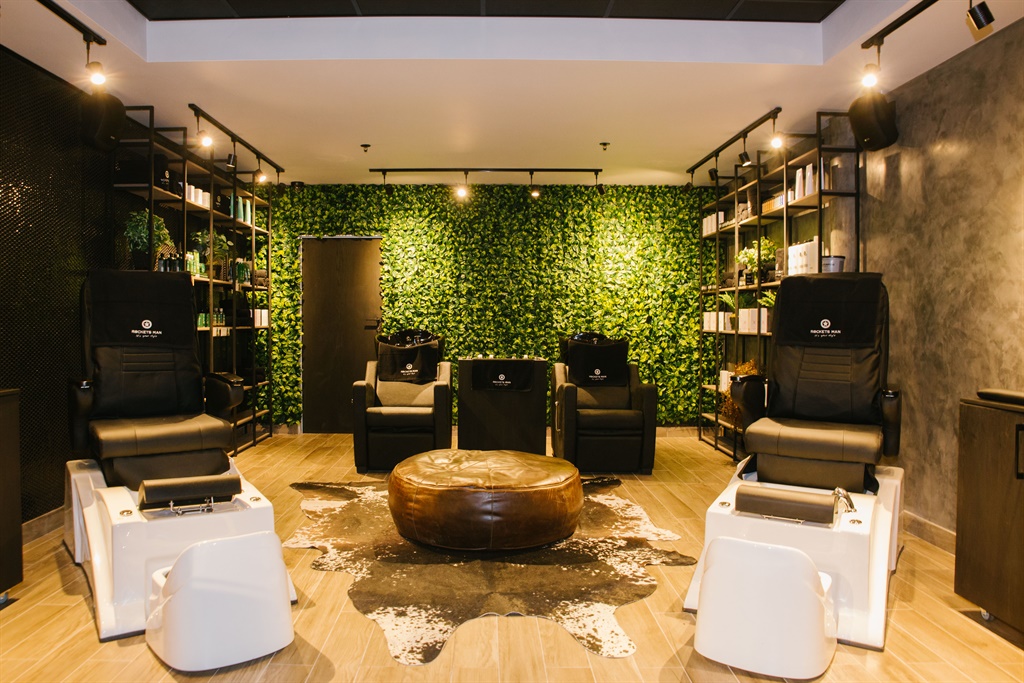 In the mood to spa? Not boxing. Manicures and pedicures for men. Pictures:supplied

Men are slowly wrapping their head around this idea of grooming. It isn't soft to have neat hair and nails. Phumlani S Langa discovers the value of high end hair care at Rockets Man in Sandton.

There’s a new high-end men’s hair experience available in Sandton. I pulled up at Rockets Man, near the banking court, after giving my Afro a quick wash and I was greeted by the store’s impressive aesthetic. It has touches of greenery on the wall matched with smoky and dark colours used on the upholstery and furniture. I half expected LeBron James to walk out and welcome me to the shop much like he would on his HBO show, The Shop. He wasn’t there obviously, but Ayanda Ntsendwane was. This man might as well be the LeBron James of haircuts. I was shown to a chair after I was offered a drink, which even included a special hair cover to prevent hair from falling into your drink while your cut is under way.

I warily asked Ayanda for a shape-up. As impressive as the store was in all its sophistication, the bond between barber and client is sacred. I don’t know this man and yet there I was entrusting my precious mane to him. He understood what I was working with though and together we decided to keep the taper cut or low fade that I was already rocking, even while it was mad faded.

He draped an apron around me that had a transparent pocket near your hands so that you can stay on your phone while getting your hair done. I don’t get down like that – when I’m in the chair all I want to do is focus on the cut. I’m not even a fan of talking, especially when it comes time for the trim to be done. A sneeze or an untimely laugh could be devastating to this process.

Ayanda has been cutting hair for six years now and he was once a member of the Legends Barber team who are also doing God’s work when it comes to hair. Since leaving there he has established himself at Rockets Man, which has a team of about seven stylists who cover all types of hair. They also have a massage element to the store where brothers can book to get pedicures (R210 to R520), manicures (R180 to R320) and even facials (R390 to R720).

Ayanda used Wahl clippers, which he says are the best out there. He switched from the main clippers to a razor blade and detailer, all while changing brush heads to perfectly construct my triple-step fade which is, of course, one of the most popular requests at the store.

Ayanda says famous people like deejays Dimples and Citi Lyts and even rapper Yanga get their fade and braids tended to at Rockets Man.

He finished his artful cut with some lovely smelling beard oil and aftershave. Then he aimed a weird contraption at my hair. It looked a bit like an oil canaster for a car engine. I asked him what that was about and he said it was a hair fibre, a non-permanent flourish to cap your new do off. I had heard of this powder that makes your hair pop, but I didn’t realise just how much it does. Ayanda calls it the confidence booster and he wasn’t lying.

I left Rockets Man feeling like Jay-Z. I even walked around the mall a few more minutes just to see people marvel at my Afro before going to work. Grown men did double takes and stopped to ask me about my hair and then tried to secretly check themselves out in window reflections. The prices at Rockets Man are high, but this is a high-end and luxurious experience. Now I have the tough task of telling my barber of so many years that I’ll be moving on, as my haircut game has soared to new heights at Rockets Man.

We live in a world where facts and fiction get blurred
In times of uncertainty you need journalism you can trust. For 14 free days, you can have access to a world of in-depth analyses, investigative journalism, top opinions and a range of features. Journalism strengthens democracy. Invest in the future today. Thereafter you will be billed R75 per month. You can cancel anytime and if you cancel within 14 days you won't be billed.
Subscribe to News24
Related Links
Tjips makes chips that slap
Is Punchline Clique local hip-hop's next big thing?
HOTEL REVIEW: Luxury behind Table Mountain at The Marriott Hotel
Next on City Press
Tu Nokwe drops fight for Sarafina!, forgives Mbongeni Ngema