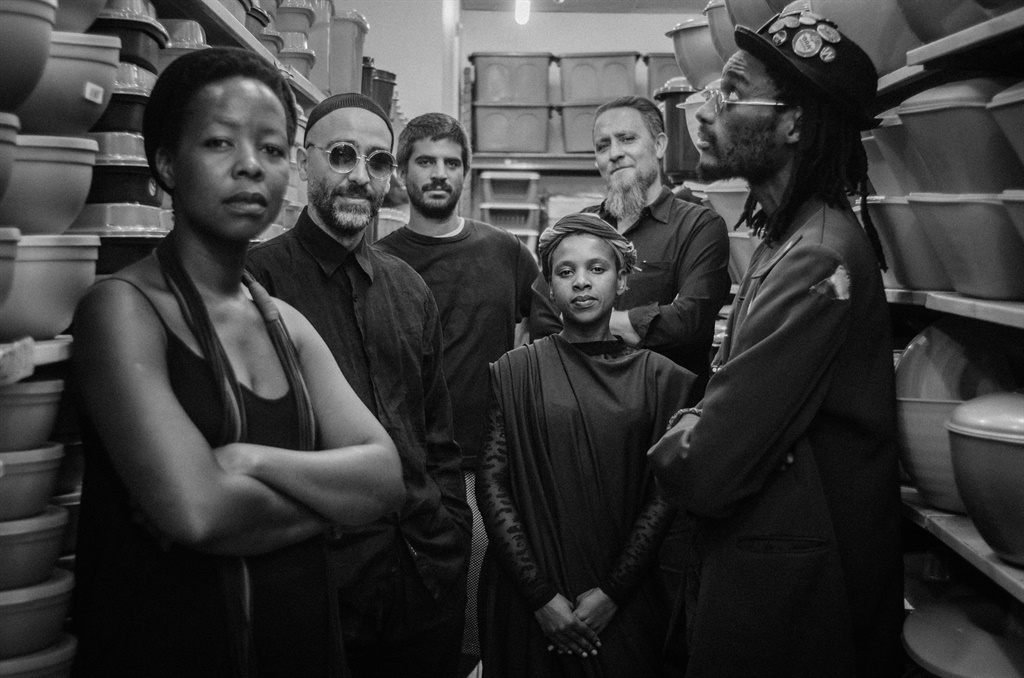 Creating music as a band is in itself a magical thing. It’s not easy to play in time together, matching melodies, heroic harmonies and ruthless rhythms. Imagine trying to balance all these elements in one take, with musicians who have never played together before. Phumlani S Langa speaks to Spaza about the creation of their monolithic self-titled album.

The Mushroom Hour Half Hour’s Spaza is an album imagined in the east side of Joburg on the blocks that were skipped by gentrification, Troyeville. This mind-boggling musical experience was given life by what is now a record label, Mushroom Hour Half Hour, and a band of six individuals who dreamt of creating something where songs were crafted through improvisation and in one take. To make things even more challenging, these artists had never played with each other before.

I have lived with their album for a few weeks; I cooked while it played, I meditated, made love, and even read a newspaper, and no matter what I was doing, the efficacy of this project would distract me.

I meet with label head and executive producer Andrew Curnow, vocalist Nosisi Ngakane and upright bassist Ariel Zamonsky at the place where all this began, the Spaza Art Gallery in the glorious 2094 region of the city. It’s a bright Tuesday morning and Troyeville greets me in all her dilapidated splendour, a relic of the old Joburg.

Zamonsky speaks with a south American accent and explains that he met his bandmates by taking in their work on the internet and through projects such as the Kwami Experience, which both Ngakane and fellow vocalist and trombone player Siya Makuzeni were a part of.

The trio begin to unpack the vision behind this complex approach to creating music.

Ngakane says: “It wasn’t so elaborate. The toughest thing was just bringing people together. When we were here we just vibed.”

Curnow adds: “It was the six bandmates, and Nonku Phiri jumped on at the end. She’s on the last track.”

He says he’s often asked if there were 20 people on the project, as it sounds that dense. He says they were able to conjure this sound by fusing traditional instruments with FX – sound effects and sonic software – and looping pedals.

The session that resulted in this album was one of a few they had. There were plans for this ensemble to appear at the Untitled Basement in Braamfontein, but this was put on hold after a personal event. The prospect of a live set of music that was all freestyled is a tantalising one. Imagine where it could take you.

Curnow says: “This was the first one we released properly. The idea is that it is a revolving band and with each album there is a different line-up. We’d only been thinking about this from a record label perspective.”

Of course, jazz heads are now baying for more and with good reason.

Ngakane breaks down how the band is more than just a band with a promotional roll-out scheme. For them, this is a movement.

“With music we kind of expect the same process – you release, you have something digital, then you tour. Sometimes not having an official tour changes the mould. It’s always been tricky for me, the idea of touring with improvisation.”

The Argentinian-born Zamonsky says: “I feel right now in Joburg we are going through a time when there are no venues, at least from a jazz player’s perspective.”

He recollects when The Orbit jazz club first opened its doors and how the city seemed ablaze with many spots.

As our interview winds down, the three creatives note how they only started getting recognition locally after international publications started taking note.

“One of the major issues in South Africa is the lack of an ecosystem for alternative music,” explains Curnow.

“The industry is very pop-centric.”

Ngakane concurs: “Something that blew my mind was that if you are an artist in France, you get paid a stipend, as the government understands how important culture is.”

If we want to support acts such as this one, we need to buy their music. An entire class of music falls through the cracks annually because it is made to advance art, not bank balances. This is a small project that packs an immense punch.

I was absolutely lost in this euphoric offering. I love that it wasn’t made to sell, but is a testimonial to artists pushing themselves, going where they haven’t before and finding notes that were hidden from them through the difficult practice of improvisation.

You can feel this as the forward-thinking band starts us off with Magwinya, Mangola neWhite Liver. Something about this record emanates local flavour without resorting to overly blatant stylings. There isn’t a hint of anything trending here, it’s pure old school. In fact, if you close your eyes it sounds like something created a few eras back. But it’s also the jazz of the future, with computer-based elements merged with organic instruments such as the violin and upright bass.

The Spaza record was released overseas, but flew under the radar locally – that is until publications from abroad began to rave about it.

Songs like Five Rand Airtime nama-eveready: 4 000 degrees, a 13-minute long banger that will take you from a futuristic odyssey and teleport you to the coast of Spain, might have something to do with that.

Ice Squinches: Waiting For You is the one for me. The vocals have been synthesised as a funk beat bubbles underneath a layer of robust conga drums. It is one of the few songs with traces of lyrics. “I’ll wait for you,” the almost tortured voice sings through a mist of Auto-Tune and synthesised vocals, reminiscent of Kanye West circa 2008.

Playing this record where it was created – at the Spaza Art Gallery – feels good. The song titles are all inspired by items you may find at your local spaza shop.

Stametta Spuit has this core energy; it makes you feel a grumble in the gut, an enema of energy if you will, administered by the only featured artist on here, Nonku Phiri. People who know about Stametta and spuits will get the gist.

Related Links
Fall under Mpho Sebina's spell
A new dating app called Filter Off is eliminating catfishing
Apple Music has created awesome album art for their local playlists
Share
Next on City Press
Bathu, the local shoe brand we can all get behind