Get to know Mandla Mlangeni, this year's king of jazz 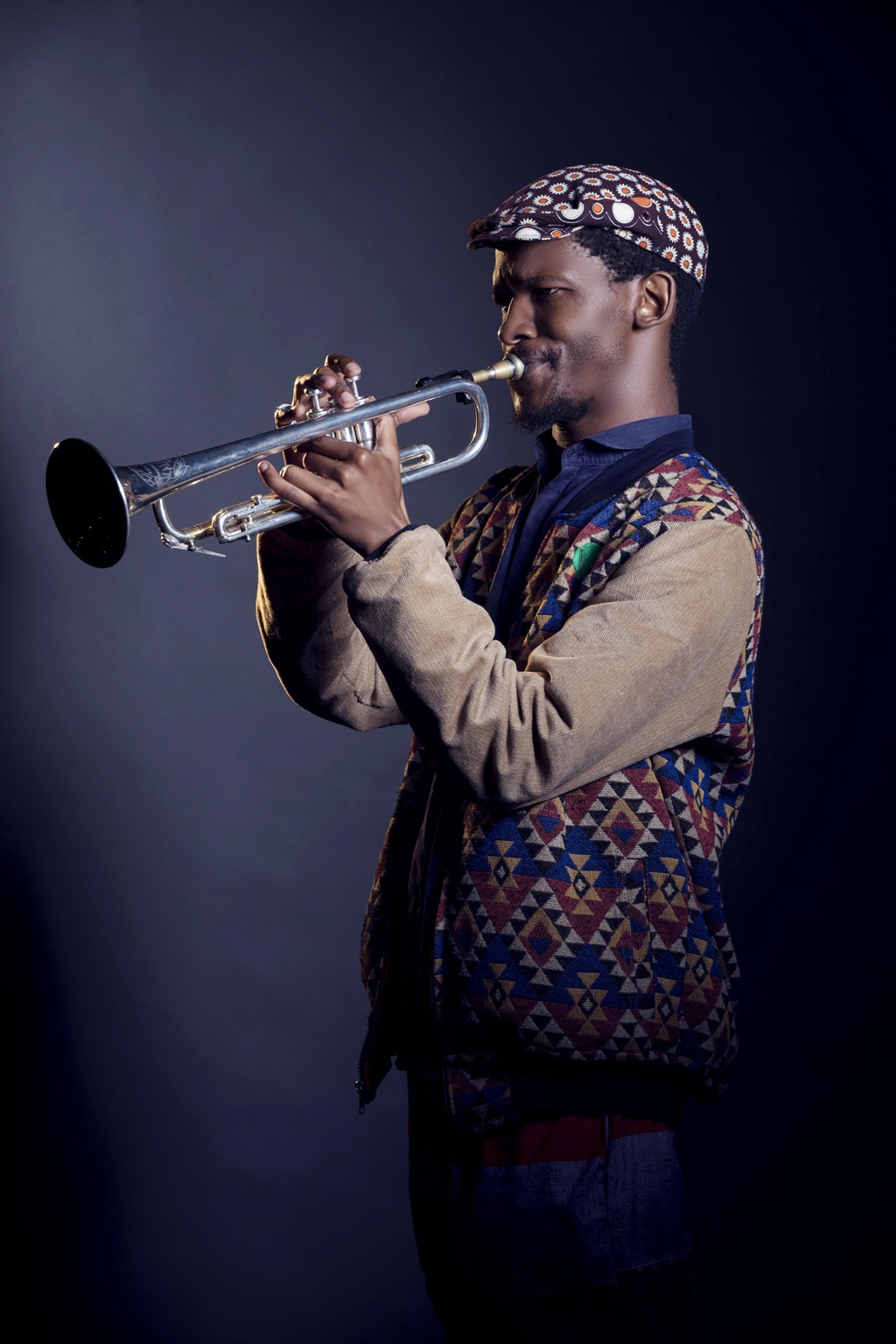 Jazz to the bone: Mandla Mlangeni believes music is a lifelong process of learning Pictures:supplied

He picked up the trumpet because they didn’t have a clarinet or sax at his school, and grew up hanging around the statesmen of local jazz. Now Mandla Mlangeni is the 2019 Standard Bank Young Artist for Jazz, writes Tseliso Monaheng.

Mlangeni is always looking some version of hip. Blame it on his roots, because his elevated sense of style hinges on his hanging around elder statesmen of jazz from an early age.

It was from visionaries, bras such as Sipho Mabuse and Barney Rachabane, that he imbibed the language of jazz – bebop; the politics of the land – an up-to-the-minute, black conscious meditation on the experiences of black and brown Mzansians on the street in reaction to the misinformation broadcast on the news; and the fashion, of course. He hung around Kippies jazz club in Newtown with his friend Oscar, bra Barney’s grandson, who was already steeped deeply in the performance aspects of jazz.

“I used to tag along with him everywhere he went,” he’ll later tell me in our conversation.

Mlangeni was chosen by the National Arts Festival as this year’s Standard Bank Young Artist for Jazz. This prestigious award is presented annually to deserving artists, affording them national exposure and acclaim.

Becoming a musician had not always been the game plan for Mlangeni, who picked up the trumpet at 14. He did know that his vocation was being of service – as a farmer, as a teacher, as a chef. The push towards musicianship was through a man called Innocent Ngwane in his neighbourhood of Soweto, whose passion inspired Mlangeni.

“He started a music school at a primary school in Klipspruit. We used to go there after school, and that’s where I started my recorder lessons. I moved on to trumpet only because I wanted to play clarinet and saxophone but they were not available,” Mlangeni says.

What Bra Ian did have, at the back of his car’s boot, was a trumpet.

The 2018 Young Artist Thandi Ntuli, who is currently in Switzerland on a residency, shares a history with Mlangeni beyond the award. The two vibed on and off bandstands during their student years in Cape Town, sharpening their wits and chops in preparation for greatness.

Reflecting on her tenure, Ntuli is relieved that she experienced another level to PR that side-stepped the usual channels. She did “different projects”, like the Share The Jazz campaign that happened in the lead up to the annual Joy of Jazz festival, which she feels added value to her name while helping her grow in the public’s eye.

“There were people who reached out because they knew that I was the Standard Bank Young Artist, and people across disciplines who had their attention focused on me because they follow the award winners. I think, definitely, exposure on a different level,” she says, adding that this widespread interest has sparked interactions that will lead to inter-disciplinary collaborative projects.

What lies in the immediate future for Thandi is learning. “I’ve been feeling the need to give my craft some space to be refined and to be polished, so I’m going to be starting my year in Switzerland on a residency. I’m just hoping to move around in that space, network with musicians around the European region, but also to really home in on work that I’ve wanted to do compositionally,” she says.

Mlangeni says something similar as we delve deeper in conversation. “That’s the thing about music – there’s never a stop, there’s never a ‘now you are a master’, and now you have to stop learning, probing, being curious ... ”

For him, the award is an opportunity to reflect on the path he’s travelled thus far, and to plan a road map for activities he wants to cover.

His first taste of Standard Bank-related jazz activity happened during the Grahamstown (now Makhanda) National Arts Festival in 2005. Pianist Bra Andile Yenana was the Young Artist during that year, while Bra Zim Ngqawana served as the conductor for the youth orchestra that Mlangeni had successfully applied to be a part of.

Mlangeni reconnects with these cats and others in Cape Town.

He relocated down south from Wits University – he’d studied for two semesters at the institution after graduating from the National School of the Arts – at composer and trumpeter Marcus Wyatt’s recommendation, and stayed on to work as a musician after finishing his studies at the University of Cape Town’s South African College of Music.

His face still glows when he recalls those days – barely able to make rent, yet having a great time nonetheless. His highlights centre around gigs at Tagore’s, the quaint spot on 42 Trill Road that no longer is; and the Monday night jam sessions at Club Swinger’s in Ottery.

He ultimately moved up to Jozi, recorded his Amandla Freedom Ensemble project in 2015, and played at the arts festival in Makhanda that year.

“It was a very long set with some nice people,” he says, delighted. One of these nice people was his mentor Mkhize. Their relationship goes further back. The pianist and composer tells the story over the phone from Durban, where he’d been laying low for a week or more while working on music projects.

“I was actually his senior at the National School of the Arts. I think he liked me because I didn’t ask him to pick up the papers,” he says, with a brief yet hearty laughter. “He used to come to my house. He was very inquisitive; he would ask questions about this, about that. We would discuss harmony, technique. I gave him the keyboard, he gave me the trumpet; I used to play the trumpet at some stage in my life.”

The master-student relationship between the two has evolved into a pairing of similar minds. “He really knows what he’s doing. He’s a young master. We are equals now,” says Mlangeni.

The Amandla Freedom Ensemble is a nod to Bra Jonas Gwangwa’s Amandla Cultural Ensemble. The group would travel and perform worldwide to raise awareness about the issues people were facing under the apartheid regime. It’s also, for Mlangeni, a homage to his own struggles; “how I would want to envision my freedom, and how song could be the healing force,” he says. He wants to bridge the gap between his era of musicians, and those on whose foundations he continues to build.

It’s a great time to be in the jazz scene, generally. Sure, venues are closing down and the music industry’s uptake of jazz-leaning artists, especially of the acoustic variety, is below satisfactory. Add to that the socioeconomic and political affairs in Mzansi, and the disorder and chaos manifesting the world over, and the picture that emerges for working musicians is bleak. But the music functions as a space for love, for comfort, for hope.

These revolutionary ideals are at the core of jazz, a lifestyle and state of mind known to go against the current. They remix how we perceive and deal with threats, and suggest wholesome counter-attack strategies essential to a functional mind and a healthy body.

That the award acknowledges the work by artists and creators of Mlangeni’s stature speaks volumes, especially for how the moneyed corporate world could contribute to the long-term sustenance of musicians by investing in people with a solid vision and a solid plan of how to execute it.

We live in a world where facts and fiction get blurred
In times of uncertainty you need journalism you can trust. For only R75 per month, you have access to a world of in-depth analyses, investigative journalism, top opinions and a range of features. Journalism strengthens democracy. Invest in the future today.
Subscribe to News24
Related Links
Photo Essay: Jazz colossus in South African townships
20 years of greatness at the Cape Town Jazz Festival
3 must-see international acts at the CTIJF
Next on City Press
‘Drunk’ Mlindo offers sincere apology for his behaviour