Robert Gumede with his wife, Portia, during their photo shoot in the Seychelles. It was one of many surprises he planned to make her 40th birthday an unforgettable event

What do you get for the wife who has everything? How about a surprise four-night birthday party in three countries with 60 of her closest friends?

That is what superwealthy businessman Robert Gumede organised for wife Portia’s 40th birthday, sealing his image as one of South Africa’s most romantic (and extravagant) husbands.

While she was preparing a surprise dinner for him on Valentine’s Day, he was sending flowers and embossed hardcover coffee table-book style invitations to 30 couples he wanted to attend her party. The 34-page invitations came complete with interesting information on the Seychelles, Madagascar and Mozambique, the countries they were to visit, as well as a tribute to Portia from her husband.

The guests, who included Portia’s childhood, school and university friends, were requested to keep the details confidential – out of “the prying media” – and not to speak about the trip to anybody so as not to ruin the surprise.

Gumede, who combined Portia’s birthday bash with a six-year anniversary celebration, admitted to City Press that he was forced to filch his wife’s cellphone to find the contact details for some of her childhood friends.

“The reason I wanted to surprise Portia is that she never had a birthday party as a child because her parents couldn’t afford it,” he told City Press this week. “When we got married, that was her first proper party. She never had a 21st or even a graduation party as a medical doctor. I wanted this to be memorable; a continuation of our wedding.”

Gumede and Portia, who now heads the Gumede Family Keni Foundation, were married in 2010 at the Nelspruit Golf Course in Mpumalanga. Portia is a former Miss Durban.

“Six years ago, I began a new life with this special lady who stole my heart with an affirmation of ‘this is it’,” he told City Press. “I want to continue with this affirmation by embarking on a new journey with her ... [in] this exciting decade of fun and dreams fulfilled.”

Gumede and Portia have three children: son Keni (5) and daughters Natana (4) and Matana (2). He has four other children.

Gumede spent an agonising two months keeping the surprise bash a secret. To help him organise the party, he roped in his eldest daughter, Jabu, currently studying in China, who said she and her father exchanged “secret emails” and conducted many “FaceTime audio chats across continents” to make sure everything was just right.

He also brought in celebrity Cape Town fashion designer and event producer Gavin Rajah, who had planned their wedding. As if that wasn’t romantic enough, Gumede bought her a wardrobe for the event, without her knowing, from five top international designers: Balmain, Versace, French couturier Georges Mak, German Philipp Plein and a Hollywood favourite, Lebanese designer Elie Saab.

He flew in top Paris-based beauty editor and stylist Farouk Chekoufi to help her look her best.

Portia was still in the dark on her birthday, March 25, which the couple celebrated at home in Durban with her parents and their children. She thought that was the end of it, but four days later, her husband said they were going on an intimate weekend away and her youngest sister, Asanda, would look after the children.

“I told her we were going to the Royal Livingstone Hotel in Zambia, overlooking Victoria Falls, to celebrate her 40th birthday – just the two of us,” he said.

On March 31, the couple flew from Johannesburg in their private jet, where, to Portia’s shock, six of their friends climbed aboard – including Gumede’s close friend, arms broker Ivor Ichikowitz and wife Debbie, who had flown from the US in their own private jet to be there.

Five hours later, when the plane was about to land, the pilot announced that they were not landing in Zambia at all, but in the Seychelles’ capital, Victoria.

An hour later, Portia was again swept off her feet when the rest of the guests, including her sister, arrived in a chartered Boeing 737.

“She was taken aback with excitement,” Gumede laughed. “She was demanding to know where the children were and who was looking after them.”

Portia said: “It was a surprise indeed. I cried until I had no more tears.” The happy couple arrive for one of their lavish dinner parties in the Seychelles. Picture: Francois Pistorius

Robert Gumede and Portia on a catamaran in Seychelles during her birthday celebration Picture: Francois Pistorius Pastor Mxolisi Lephoko and his wife, Ofentse, with Portia and Robert Gumede in the Seychelles. Picture: Francois Pistorius Idyllic holiday: Guests on a luxury catamaran in the Seychelles. Picture: Francois Pistorius The invitations sent out by for Portia's surprise birthday.

The first party, a “tropical chill”, was at the five-star Constance Ephelia Resort where they were entertained by local musicians, including Idols 2015 runner-up Mmatema Moremi, who serenaded Portia with Whitney Houston’s ballad I Will Always Love You and Celine Dion’s Because You Loved Me. She also sang their wedding song Ngimtholile, by Theo from Mafikizolo.

During their three days on the island, the Gumedes’ guests were treated to a yacht cruise, helicopter rides, a karaoke evening, dinners of smoked marlin and other seafood, and chocolate desserts washed down with Moët and Cristal Champagnes and Johnnie Walker Blue Label.

Another surprise for Portia, dubbed “Miss Party” by her husband, was a photo shoot. 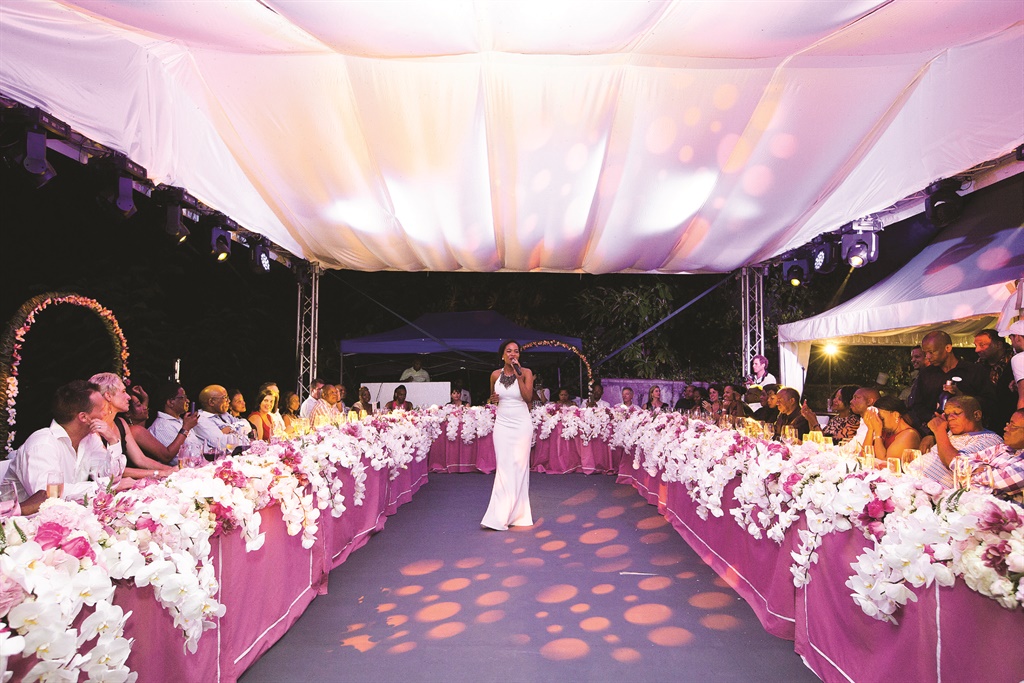 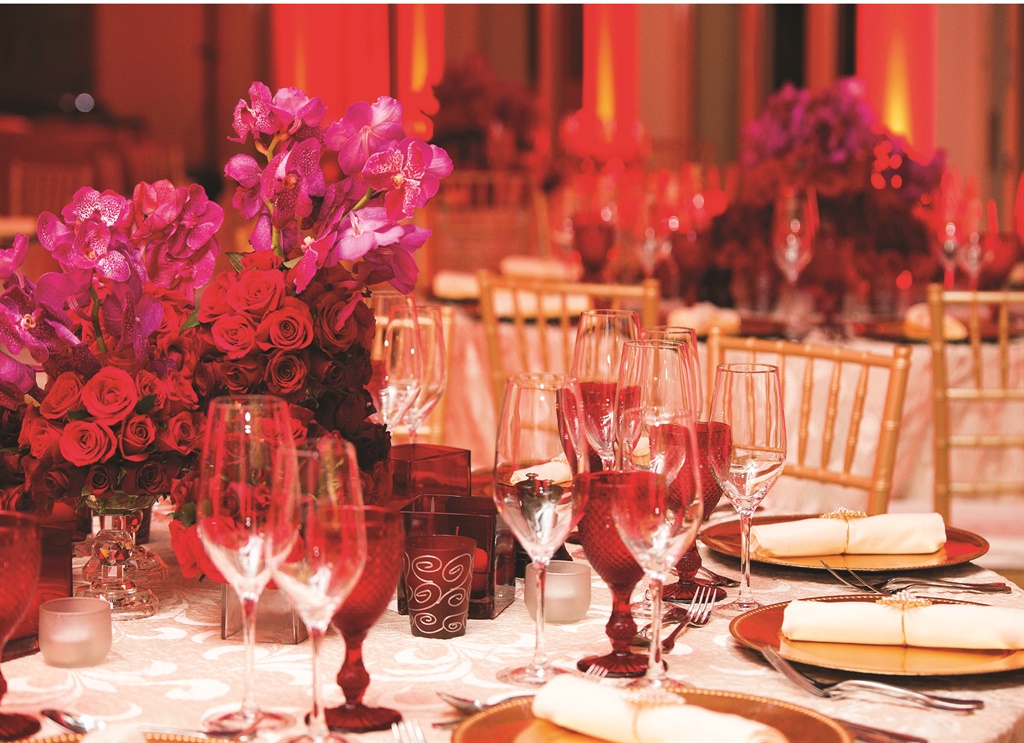 The party then moved to the five-star Nosy Be Hotel in Madagascar, where they alighted for lunch.

By evening, they were in Maputo, Mozambique, where they enjoyed a sumptuous dinner at the glamorous Polana Serena Hotel, which was attended by Mozambique’s tourism minister, Gumede’s friend Fernando Sumbana, with his wife, Felomina.

In a speech, Portia told her husband how blown away she was. “To my best friend, confidant, partner in crime and the love of my life, my husband Matana, saying thank you seems hardly enough for all you have done for me,” she said. “Thank you for a 40th beyond my wildest dreams. It is only you who can put together an unforgettable celebration and do it without a hint ... I love you to bits!”

Today, Gumede will also surprise his guests – and his wife – with a copy of a glossy, commemorative magazine packed with photos of the three-day bash.

How much did it all cost him? He’s not saying. Gumede would only say that he was looking forward to spending his own annual birthday celebration in August with 12 000 kids from Mpumalanga.

We live in a world where facts and fiction get blurred
In times of uncertainty you need journalism you can trust. For only R75 per month, you have access to a world of in-depth analyses, investigative journalism, top opinions and a range of features. Journalism strengthens democracy. Invest in the future today.
Subscribe to News24
Next on City Press
Geologists warn of potential deadly cyclones in KZN due to climate crisis