How King Tha built her throne After 22 years in the game, rebel music icon Thandiswa Mazwai’s most personal show to date, Letter to Azania, looks into the past to talk about the future.

She sits down with Charl Blignaut for a chat.

There are two events in particular that shaped her destiny, says Thandiswa Mazwai from the couch where she holds court, every inch a star.

Her flowing black-and-white African-patterned dress is suggestively low cut, her hair is sculpted and shaved into a crown strung with cowries, and her trademark voice is melodious and husky.

The one was the death of her mother, Belede Mazwai, a month after Thandiswa’s 16th birthday.

It would set her on a “trajectory of longing” that would ultimately shape the fierce identity of the singer-songwriter who is today also known as King Tha.

The second was the birth of her daughter Malaika (18) with Bongo Maffin bandmate Stoan Seate.

Soundtrack of the revolution

Mazwai was 19 and studying literature at Wits University when she recorded her first song, Fester, as a member of kwaito originators Jacknife.

“It was the first time I stood in front of a microphone that would record my voice. So I was almost whispering in front of it, and very shy,” she says.

It’s been two decades since the vocalist burst on to the charts with Bongo Maffin’s debut album The Concerto, which would be the face of a new

Now, 42-year-old Mazwai is examining her past.

For the past few years, she’s been writing a memoir that is also a grand history of the Bantu people.

The first flowering of this memoir is her forthcoming stage show, Letter to Azania, which will debut later this month.

Bongo Maffin, meanwhile, have a new hit, the fiercely political Harare, and are in studio preparing a new album that’s most likely going to hit the market around about March next year.

It’s a market that was irrevocably changed by the force of kwaito, the politically-driven, hip-hop inspired soundtrack for the youth of 1994.

It was further shaped by a line of political women artists.

As impossible as she is to pin down musically – between the jazz, the Afro funk, the traditional sounds and gospel and punk and pop – Mazwai is easy to place within this powerful fistful of South African female musicians who inspired her creative journey, many of whom she would go on to perform with: Miriam Makeba, Letta Mbulu, Busi Mhlongo, Brenda Fassie, Lebo Mathosa...

The politics of home

Asked about the unflinching, womanist, Pan-African politics that continues to underscore Mazwai’s voice today, she replies with a few
simple words: “I was raised by two journalists in Soweto during apartheid.” She smiles and recalls that “papers, pens, writing, words, thinking – that was what happened at home.

"And my father [Thami Mazwai] hardly speaks, so when we were growing up, his sound was the typewriter.

“I was born in the Eastern Cape, but my first memories are of Soweto, living in Mofolo, in Meadowlands, in Pimville. I grew up with these parents who were extremely political. I mean, you couldn’t be a black journalist at the time without being political.”

But then her mother – who had gone on to be a teacher and then a student of law – died a day after giving birth to a baby boy and Mazwai found herself at sea.

“Your mother is like a pivot on which everything in your world rotates. She’s the centre of your identity. When that thing is removed at a young age and you still don’t have a real sense of self, you end up quite lost in the world.

"So I always had a sense that I had to find or reconnect the pieces of myself.”

What Mazwai did in the course of her career was build a kind of mythology of a community of women that is more than just herself.

She’s not shy to play with an all-woman band and host an all-woman concert, where even the security guards are women.

“Ja. Women have always been the centre of my life. I was raised mostly by women – my mother’s sisters, all those people – that’s where my identity lies; it lies in all the women in our family.

"And any time I’ve needed anything, from a hug to strength, I’ve relied on the women in my life.”

The girl has to show thighs

Mazwai has always maintained that she encountered little abuse in the industry, for which she counts her blessings. She believes that it was her mother who guided her.

“I was very concerned about all the things that my mother had taught me, and of the fact that I could not waver from that.

"And so, from the moment that I entered the music business, I knew that I had to set my own rules.

"Some guy said: ‘You know, if this band is going to be successful, the girl has to show thighs.’ I said not me. The messages that I got as a young girl were that it was much sexier to hide it.

“I remember our first video shoot, we did it at Carlton Centre Hotel on the rooftop. There was a pool there.

"And I got there and the director said: ‘Oh great. So, for the girls, we’ve got bikinis.’ And I said I’m not that girl.” 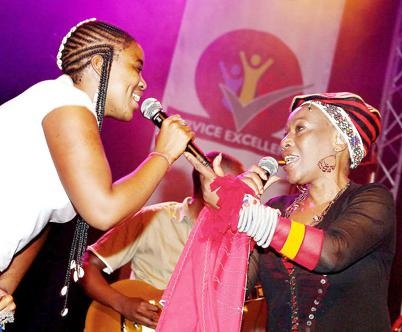 When a man slapped her on the first day of a major tour in London, Mazwai packed her bags. She wasn’t more desperate for fame than she was for dignity.

The whole room bursts out laughing when she talks about how, when she was eight and a half months pregnant with Malaika, one male record boss suggested she induce labour to be able to tour with the boys in the band.

“People sometimes thought I was difficult, a bit of a diva, but I think it was that I’ve always had this sense of self from the very beginning.”

For Mazwai, her new work is a new chapter in a lifelong quest to own her freedom; to create a home. “Even with Bongo, we were kids who were displaced. Jah Seed was displaced from Zimbabwe, Stoan was in Johannesburg from Bophuthatswana. I had always felt displaced; that Soweto was a place of displacement – you had to leave home and try to create a new space.”

This is the Azania that has peppered all of her solo albums and is the subject of her new show.

“It’s about the importance of imagination,” she says.

“When you are an oppressed people, you must imagine a new world. Ultimately, it has to be about self-love, it has to be about personal space, because you cannot create it – it’s too Utopian for the real world, it can only exist in the intimacy of your own spirit.”

It’s also why she has chosen to subvert masculinity with her moniker King Tha.

. Letter to Azania will take place on November 24 at 8pm at The Lyric theatre in Johannesburg. Tickets range from R200 to R500

We live in a world where facts and fiction get blurred
In times of uncertainty you need journalism you can trust. For 14 free days, you can have access to a world of in-depth analyses, investigative journalism, top opinions and a range of features. Journalism strengthens democracy. Invest in the future today. Thereafter you will be billed R75 per month. You can cancel anytime and if you cancel within 14 days you won't be billed.
Subscribe to News24
Related Links
Thandiswa Mazwai celebrates ‘revolutionary’ 42nd birthday
Thandiswa Mazwai claps back at troll: 'Nakedness CAN be a revolutionary act'
It’s not anti men: Thandiswa’s ready for her womxn-only party
Next on City Press
Somizi and Mohale were not legally married