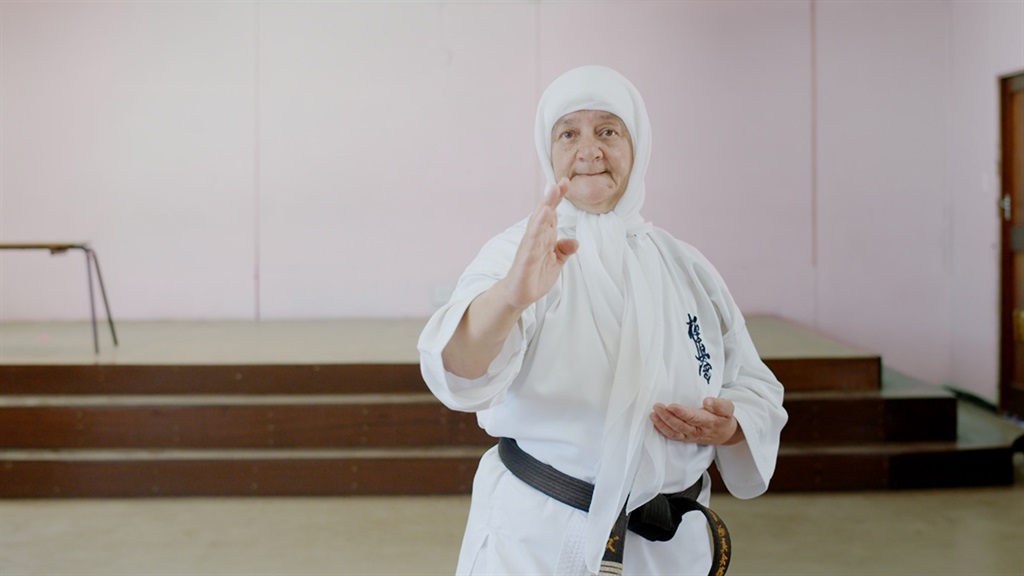 Martial arts films were a global sensation during the 1970s and 1980s, when heroes were made and emulated. Across racially, economically and culturally segregated South Africa – in the fashion of Bruce Lee, Karate Kid’s Daniel and Mr Miyagi, and Chuck Norris – people raised their arms to their sides, lifted a single bent leg to waist height and flung out kicks to within inches of someone’s face while exclaiming in a high-pitched voice. They emulated the stars of martial arts movies.

“Starring”, as in the starring role, is an adjective used by the paler side of the country’s still palpable racial divide. For the majority of South Africans, though, “starring” describes the heroic character in a film. And that heroism can transcend the silver screen into lived experience.

Togieda Flowers is a real-life “starring” if there ever was one. The 73-year-old karate sensei, which means teacher in Japanese, is a martial arts instructor. She has been training since 1977. She runs a dojo in Surrey Estate in Cape Town and is one of two protagonists in Like Water, a short documentary film about her martial arts and the bond she has with her students.
So far, the film has been shown at the Muestra Itinerante de Cine Africano Festival, the NY Portuguese Short Film Festival and the Encounters South African International Documentary Festival.

As the film plays out, a six-year-old student at the Surrey Estate dojo, Nawar Taliep, becomes both a co-star and a frame for the film. Sara de Gouveia and Jessie Zinn co-directed Like Water with the clear intention of placing these characters at its centre.

The connection between teacher and student presented itself spontaneously to the directors from the outset. “The first day we went [to the dojo],” De Gouveia remembers, “we had no idea that we were going to meet Nawar. It was one of those encounters that happened by chance but also opened our way of looking at the story. A short documentary has been made about Sensei Togieda Flowers, a 73-year-old instructor. Photo: Encounters South African International Documentary Festival

“All of a sudden, there is this beautiful girl who is full of energy. She is kind of interested, but also not interested in karate. She’s just a little bit too young to even get it. And there was something beautiful about that energy and how you shape it into a karateka. We started imagining that it would be interesting to see the story from her point of view.”

READ: We long for the freedom Sarafina sang about

Like Water plays up the age difference between Flowers and Nawar. Running for just 14 minutes, it intersperses live action with animation. Watching it is a sweet, ephemeral experience.

“It was a candy floss world that we were capturing, that we were immersed in,” says Zinn. “It was Nawar’s world, which was a bunny [rabbit], animated, colourful world. We didn’t want it to become a film about karate per se, we really wanted it to be an intimate portrait of sensei and Nawar.”

There is a dynamic tension created by the generational gap between the protagonists. Flowers was born in Walmer Estate, a neighbourhood adjacent to District Six, in 1947. That year, the Sauer Commission endorsed total racial segregation in South Africa, arguing it was a “God-ordained plan”. The Group Areas Act declared District Six a whites-only area almost two decades later. Flowers and her family were forcibly removed from their home and settled in Athlone on the Cape Flats.

Nawar, on the other hand, began her karate training the year student Fallists protested across university campuses in South Africa, a contemporary turning point for youth-led resistance in the country.

READ: There''s an art to breathing

Flowers married and moved to Grassy Park with her husband, Nazeem, who had been training in the Japanese Kyokushinkai karate system for several years. She began her training at the dojo Nazeem had established a year after the 1976 student riots. The couple’s young daughter soon also joined, aged four.

“It was really like a sparkle in our karate life because we were a karate family,” Flowers says. “Mom, dad and daughter doing it. As the years went, we excelled because we were in an underprivileged area where they needed some sport. I don’t think that there was [any] sport at the time.

“I was 30 when I started, with my husband as my instructor. We had a good understanding. We had respect for one another in the dojo. But when we were home we were a family with its differences. Our relationship was good because we were on the same page.” Nazeem died in 1992 and Flowers was not only left to raise their young daughter and a one-year-old son. “I had to take over the training,” she says. “I needed to gather all my knowledge and experience while he was there and I had to give it over. I was not a student anymore. I was an instructor. It wasn’t a very easy journey for me. I kept on because my training was my life.

“The way we trained was a pleasure. The passion we had, it was everything to us. With the help of my senior students, we carried on and things went well.”

Dedication and the dojo

Nawar is surrounded by support and affirmation in her karate practice. Zinn says that for her, the dojo “was almost like entering a karate womb. And it was amazing. At the forefront is this 70-plus sensei who is captivating the attention of the entire space, [then] you have all these little girls, and then behind the girls, watching them from the chairs in the classroom, are mostly their mothers.

The early stages of Flowers’ karate journey was met with resistance from her mother, who saw martial arts as something women should not do. “You can imagine how my mother went ballistic thinking, ‘I’m taking my little girl also to do this martial art.’ As years went by, she realised that I was involved in this martial art of defence and with the crime and the ill happenings to females, I think she had a change of mind.”

Not all contrasts between Flowers’ and Nawar’s generations are straightforward, however. The waning popularity of martial arts in South Africa’s townships, for example, cannot be explained by sociopolitical changes alone.
“Things do change,” Flowers says. “If you look at today, karate is not like it used to be. If I look at the generation of today, I find that the concentration is very weak. A student will come to me and say, ‘I do rugby, cricket and I do karate.’ We were doing just karate, nothing else. And we didn’t chop and change to go from one karate [system] to another.”

Dedication to continued improvement defines a long-term martial arts practice. It is a process of self-mastery gained by continuously recoding one’s physical behaviour through deliberate practice. It is a lifelong pursuit.

“As I aged,” Flowers says, “my training continued but I had less speed. You become a little bit fragile. But I never left my training. Up until now I train. My body always urges [me] to get into training and I want to do my punching and kicking. I just do it a little bit slower now.”