The reigning queen of the small screen: Her show Uzalo dethroned Mfundi Vundla's long-running Generations as the most watched soapie in the country and Gugu Zuma has not looked back since. pictures:supplied

Gugulethu Zuma-Ncube first caught our attention in SABC1’s Interrogation Room in 2007, then in a supporting role on SABC3’s Isidingo. Since then, the daughter of Nkosazana Dlamini-Zuma and Jacob Zuma has progressed from solely being an actor to producing content, writing and running the Herculean production house, Stained Glass Productions, which is responsible for shows such as Uzalo, eHostela and Ifalakhe. Phumlani S Langa sits down with this inspiring content creator.

Gugu Zuma-Ncube might be one of the best storytellers around – you need only refer to #Trending’s past coverage of her shows.

The latest is Mzansi Magic’s visually stunning Ifalakhe, a pre-colonial Zulu show depicting the pride, fury and opulence of that nation.

She and her team have concocted a recipe for entertainment that sees them bring us stories that you could either see play out on our streets, as is the case with Uzalo and eHostela, or which play on our emotions, such as the need to leave a lasting legacy as Ifalakhe depicts.

We start our chat around Uzalo, a show that changed soapies in the country for the better – dethroning Mfundi Vundla’s Generations – which had reigned for years.

Uzalo depicts the people of the KwaMashu community in Durban, whose lives revolve around a local church and the never distant element of crime.

Zuma-Ncube and her collective at Stained Glass Productions unshackled everyday stories from the confines of a studio set and incorporated cleverly devised location shoots into the production, which, when paired with the menacing might of her pen, resulted in this show becoming one of the most popular in its class.

The bubbly and multifaceted artist says: “It feels awesome. I feel very proud of Uzalo. We were able to do some cool stuff. Getting to number one in our first year was pretty amazing, as was getting those sorts of TV history records that we have.

“We’ve just come off last month in which we hit 10.4 million viewers – another record. We had six episodes last month that went to more than 10 million.”

In the world of gambling, it is often said that it’s best to quit while you’re ahead.

In the arts it’s quite the contrary. When you have the hot hand, you don’t give up your seat at the table. Zuma-Ncube has no intention of doing that.

“We’re doing eHostela 2 next year and so we have started working on that. We’re also doing a new long running [show], which I can’t say too much about now. But in time it will reveal itself. Obviously, Uzalo continues for another season,” she says with a slight grin.She couldn’t be happier with the reception this show has garnered and feels the stories reflect the people and times of our country. Zuma-Ncube works closely with two equally talented sisters, one being her actual sibling Thuli Zuma as well as Mametsi Thibedi.

Together they form an entertainment triumvirate akin to the likes of Bomb or even Ferguson Films, whose work Zuma-Ncube has an admiration for.

Before she found herself at the height of programming prowess, how did she come to be in front of the camera and later find herself dealing with the mechanics of cultivating an entire series from the producer’s chair? It all started when she realised a law degree was just not going to pan out for her.

Reminiscing with a slight snigger, she says: “Growing up I definitely wanted to be a lawyer. It was all I could think of or speak about. I did go to law school for a year, I was at the University of Cape Town in the law programme. Once I started studying, I didn’t know if it was for me, especially learning about the industry and the sector, the opportunities – it just didn’t feel like a good fit.”

She had always acted but hardly thought of it as something she could do, beyond being just a hobby, until her younger sister, who was enrolled at Afda (creative arts training school) at the time, took her along to an open day and this was when she realised that acting could be a viable option.

Her parents, Nkosazana Dlamini-Zuma and Jacob Zuma, were not thrilled but I bet they’re beaming now. “Acting was the thing I wanted to do; it was the passion. I graduated and did very well and started working. I was lucky and got a few good gigs very early on,” she says.

She concedes she became frustrated being at the mercy and whim of casting directors.

She felt it was an uphill battle to convince people continuously to give her a role as she believes she doesn’t fit the expected mould for a leading lady in South Africa.

Producing was how she navigated this challenge as it allowed her to find a way around these industry gatekeepers by having her own set of keys.

“It was a means to act, to write my own stuff so that I could act in it. I really fell in love with it and tried hard to get good at it and hone that craft.”

THE TRUTH HURTS BUT IT ALSO MAKES FOR GREAT TV 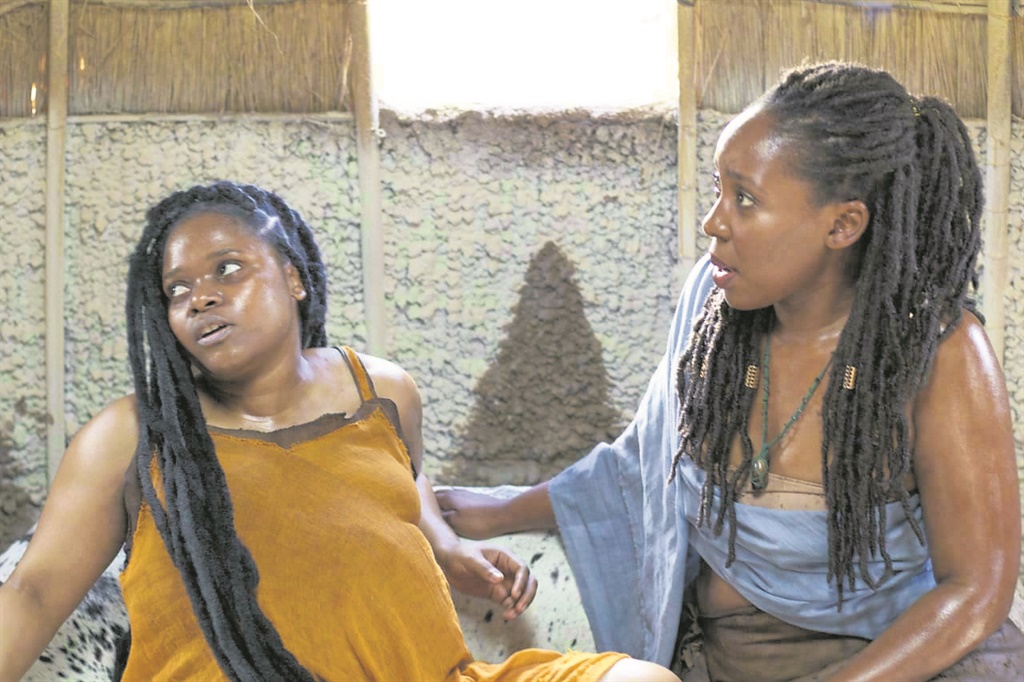 Her brief stint in the world of law has aided her in caring for this empire she now finds herself leading.

She has arrived at a point where her business acumen and artistic creativity are working hand in hand and bearing fruit.

So how does she decide on what story to tell us? “If it’s exciting to me and I feel as if I would watch this, that’s when I know I’m on to something good.”

She praises her collaborators who she claims have really started to hit their stride together and bounce ideas off each other almost instinctively.

“Over the years I’ve honed how to tell these stories in the most dramatic and creative ways possible and also how to work with other people as well. I don’t think any one person can have all the best ideas and so using other people to bring in elements that might be in my blind spot makes everything stronger.

“I think Ifalakhe took it out of us the most,” she says, after pausing a moment to think. “It’s the one that really was from beginning to the end our brainchild.

“It took a lot of convincing as it is different to what is generally on TV. It took a lot to make people see that it could work and that we were ready for it. The characters were fun, not too many were particularly hectic. If we’re talking strenuous characters then eHostela was probably the one that had the most.”

eHostela takes us to the reality of izinkabi (hit men) in KwaZulu-Natal. Trying to reconcile someone who kills for a living with the idea of love really pushed Zuma-Ncube and her team to go where they hadn’t before and it shows.

Being the daughter of a former president might be why she feels this kind of story is true to our reality as Africans.

Speaking a little more solemnly, almost as if drawing from personal experiences, she says: “A lot of the time we live with people in our communities and our families who sometimes don’t do the right thing. They do pretty hectic stuff but we still love them.” 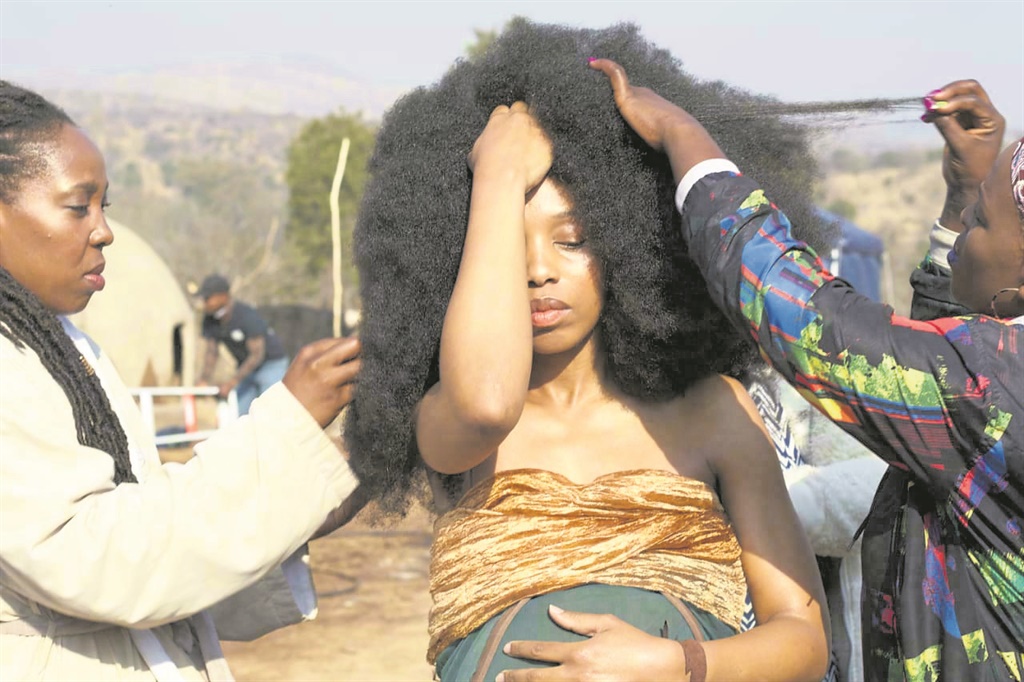 Every detail matters: Zuma-Ncube acts in Ifalakhe but she is still hands on when it comes to even the smallest details behind the scenes. pictures:supplied

Zuma-Ncube maintains that she is as hungry to succeed today as she was when she first attempted to run a show.

The local industry is male-dominated and I ask why there aren’t more Shonda Rhimes or Ava DuVernay equivalents in South Africa who can do what Zuma-Ncube is doing – and tell a multitude of stories without losing steam.

“I don’t know, man. I can’t speak for the others but I’m hungry. That’s why I do it. There are so many stories that still need to be told,” she explains.

She gets a little bored doing one thing hence the varied output but she reveals in her work.

In fact, she is researching ways to generate money from full-length features, which is tough going as our country doesn’t have a culture of going to theatres.

She is keeping a close eye on Hollywood, Bollywood and Nollywood.

While looking to make money, she knows it’s also important that her work has either a thoughtful or moral takeaway as well as providing slight escapism.

The down-to-earth, top-tier TV maker does fear falling off, the fire inside her expiring, as often happens with some artists.

“The energy is different even though the fire is there. I can’t pull the all-nighters I used to so I’ve had to focus on redirecting it [the energy] appropriately without burning out.”

She quotes the Bible, surprisingly, by saying: “without vision, my people perish” and I think having that vision is something that helps keep the flames raging and being kind to yourself when it does dwindle a bit”.

There are very few signs of that happening as she is brimming with ideas.

She would love to do something around the battle of Isandlwana as well as the story of the SS Mendi, which her team is already working on but she is mum on the details.

I imagine the Jacob Zuma-inspired series would be quite a watch.

We live in a world where facts and fiction get blurred
In times of uncertainty you need journalism you can trust. For 14 free days, you can have access to a world of in-depth analyses, investigative journalism, top opinions and a range of features. Journalism strengthens democracy. Invest in the future today. Thereafter you will be billed R75 per month. You can cancel anytime and if you cancel within 14 days you won't be billed.
Subscribe to News24
Related Links
How the music industry is treating your former Idols winners
Godfather of Harlem: A smooth criminal named
BAKAE: You remember the 2on2 B-boy Battles?
Next on City Press
Chicco defends izinkabi claim