Mshoza: Going beyond the pale Mshoza, whose real name is Nomasonto Maswanganyi, prepares to have a series of surgical procedures done at the hands of Dr Claire Jacobsohn in her quest to look more like Nicki Minaj. Pictures: Lucky Nxumalo

Update: On Wednesday [November 18 2020] Mshoza passed away due to complications from diabetes. She was 37 years old.

In this article from April 2016, Ntombizodwa Makhoba looks into why the Kwaito star was obsessed with changing her looks.

That comment – passed by her now ex-husband Jacob Mnisi after former kwaito star Mshoza gave birth to their second child in 2010 – ate away at her soul.

It was the day she resolved to lighten her skin, a decision that set her traipsing from doctor to doctor in her determination to become a paler version of herself.

Mshoza’s skin-lightening obsession began when she experienced pregnancy-induced hyperpigmentation, a common but temporary condition that causes women to develop dark patches on their face and neck.

In the past five years, the 33-year-old has also undergone plastic surgery as well as nonsurgical procedures in an attempt to resemble Trinidadian-born US rapper Nicki Minaj. The pictures released by MTV Base last month, which showed her with grotesquely swollen cheeks and lips, had Twitter in a spin.

“My skin was pigmenting. Lightening my skin was the only choice I had,” she tells City Press.

“It has nothing to do with self-hate. I do not regret the decision – I love myself. Even though I have always been beautiful, I think I am prettier now.” 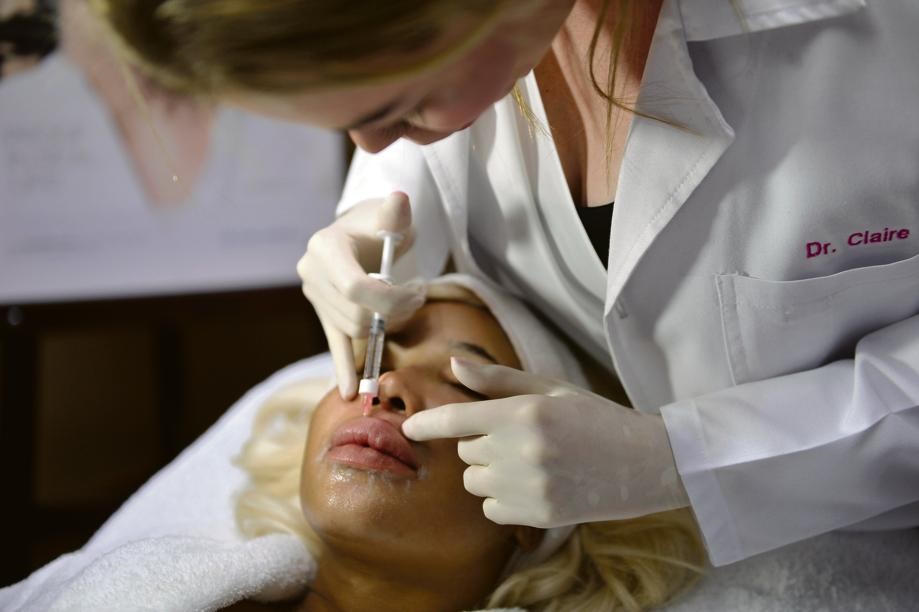 Mshoza is vastly different from the softly spoken Nomasonto Maswanganyi I met back in 2001 in Zola, Soweto, where we both grew up. Three years older than me, she regards me as a little sister. When her marriage to Mnisi, a local businessman, was unravelling, it was me she called from Emalahleni, Mpumalanga, late at night.

That call took place three days before she left with nothing but her two small children, daughter Pride (now 7) and son Jacob Junior (now 5).

She also turned to me for help after a boyfriend beat her and held her hostage for four days last year.

For those who know her, it is difficult to accept Mshoza’s insistence that her decision to radically lighten her complexion – to several shades lighter than she was as a child – was simply a response to a temporary, pregnancy-related condition.

Growing up, she spent hours each day listening to the music of her idol, Michael Jackson. When the King of Pop died in 2009, she was devastated, taking his death even harder than that of her close friend, kwaito star Lebo Mathosa.

Her cousin, Lebo Mafuma, says Mshoza told her that a part of her died with the music icon. Mshoza couldn’t eat “for days”, and refused to leave home or speak to anyone.

“She once told me that, one day, she would honour Michael’s death by changing the colour of her skin. So I wasn’t surprised the day she decided to go white,” says Mafuma.

Jackson, whose white skin was caused by vitiligo – a condition that causes depigmentation of parts of the skin when pigment cells die – was a prolific pop artist and a spectacular dancer.

She is famous for one hit, Kortes, which was released 15 years ago. Despite this, she still makes headlines almost every week – if not for bleaching her skin, then for her relationship woes, which have helped her occupy reams of tabloid space and remain relevant on the showbiz scene.

Mshoza has made skin lightening a cool trend locally, and it has been followed by more successful starlets such as Khanyi Mbau and Kelly Khumalo.

She has regular sessions of intravenous skin-lightening therapy, but has not stopped there, having already subjected herself to other plastic surgery procedures, including breast augmentation, rhinoplasty, liposuction and dental surgery.

In February, she underwent lip augmentation and cheek-filler procedures – and she is still not done.

“I want Nicki Minaj’s bum,” she insists. But a Brazilian butt lift costs a fortune, and she will have to wait.

Where does she get the money?

“I don’t perform for free,” she retorts angrily.

“I have businesses that people don’t know about
and I prefer to keep it that way.”

I have often asked her about her businesses, but she refuses to comment. It’s a Tuesday morning and I meet Mshoza at The Aesthetics HQ, the surgery in Rivonia, Johannesburg, of Dr Claire Jacobsohn.

As usual, Mshoza is running late and keeps the MTV Base TV crew waiting. She has three treatments scheduled: intravenous skin-lightening therapy and, for the first time, lip and cheek fillers.

“I want big lips,” she stresses to Jacobsohn after finally arriving two hours late. “They must look much fuller than the ones I currently have.”

The procedures would have cost her R20 000, but since she is the clinic’s brand ambassador, she gets them done for free.

Jacobsohn, who has been involved in aesthetic medicine for 12 years, bears more than a passing resemblance to her patient: she’s had everything done, from botox and laser skin treatment to cheek and lip fillers, which she injects herself.

She explains that Mshoza’s intravenous drip contains the skin-lightening ingredient glutathione, which also combats ageing. “It’s great for energy levels, muscle recovery and mental vitality, and helps a lot for patients who are depressed,” she says.

For Mshoza’s cheek fillers, Jacobsohn is going to use between three and five syringes, which cost R2 500 each. “Because she wants a very dramatic look,” she says. “But not too much on her lips because she sings – it will affect her singing.”

Mshoza has made her tardy entrance teetering in size-three stilettoes. She swaps her fluffy beige waistcoat for a white laboratory coat and lies on the bed.

She glances at me and her eyes widen in fear. Ironically, the plastic surgery addict is frightened of needles. I am as frightened as she is.

After her drip procedure is completed, Jacobsohn marks Mshoza’s lips and cheeks, outlining where she should inject the fillers.

“Nobody is symmetrical,” she says.

As I silently vow never to inflict this pain on myself, Mshoza reads the expression on my face and says: “One thing I am scared of is liposuction. I did it after I gave birth; I will never do it again. It takes a long time to heal.”

After three injections, Mshoza’s lips are three times larger than they were. “Ouch! Ouch!” she laments.

The cheek-filler procedure follows. When it’s done, her face is swollen; she cannot speak and can barely open her mouth.

Jacobsohn says it will take her two weeks to recover, but this doesn’t stop Mshoza showing off her new look.

I bump into her at the SABC offices later that week; she is battling to pronounce her words. Mshoza has never followed anyone’s orders. As a 14-year-old living in Zola, I remember being star-struck by Mshoza. The first time I saw her was in 2000. She was dressed in blue jeans, white All Stars, and wore her natural hair in a funky bob cut.

Surrounded by a group of boys, she was the township’s It girl, having just released Kortes and been crowned the queen of kwaito – and was the only woman signed under the Bulldawgz record label.

At the age of 15, I began to feel unsafe in Zola – which was known as kwam’shay’aze afe (beat him to death) – after a gang of six young men who called themselves Amabhubesi began kidnapping and raping girls. Parents did all they could to protect their daughters.

Mshoza says she grew up in Zola 1 surrounded by boys and felt safe because she was “a tomboy”.

“It didn’t have a negative effect on me, because some boys thought I was one of them. Being a tomboy was a survival tactic and I did everything from breakdancing to karate and rapping music,” she says.

She recalls walking the streets at night alone there and feeling secure. “I thought I wouldn’t be attacked by any men because I was a tomboy,” she says.

Her masculine demeanour was honed by running battles with her stepfather.

“I would fight for my mum every time my stepdad beat her up. He stopped beating her,” she says.

“I am the second child of three girls, yet I fought for my siblings. I was the man of the house.”

Mafuma confirms that the boyish personae they both assumed was the only way to survive the rapists and gangsters in the township.

“We hung around with the boys and smoked weed. They regarded us as one of them.”

Where, then, did Mshoza’s desire for hyperfeminine movie star glamour come from? It happened when she married Mnisi, she says.

“That’s when I realised I don’t have to be a starring [strong lead character]. It was time for me to be protected by someone else,” she says.

Her new feminine appearance has done little to protect her from divorce, a string of disastrous affairs and an attack by a lover who whipped her with a belt and beat her until she lost consciousness.

It has, however, kept her career alive and her face on the covers of magazines and tabloids.

“I don’t need fame, but unfortunately it follows me. I just love being beautiful,” she says.

“I am doing this for me, not for anyone else. I love myself!” she insists, perhaps a little too forcefully.

“Fame doesn’t pay my bills. I have other decent jobs that I do, but I am not ready to divulge them.”

Her latest Minaj look comes shortly before the launch of her new single, Deliver Me. She denies that her latest plastic surgery procedure was a publicity stunt to drum up interest ahead of the track’s release. “I am asking God to deliver me,” she says of the song.

“It is so sad when you fix your face. People make nasty comments. It hurts, and could destroy you.”

We live in a world where facts and fiction get blurred
In times of uncertainty you need journalism you can trust. For 14 free days, you can have access to a world of in-depth analyses, investigative journalism, top opinions and a range of features. Journalism strengthens democracy. Invest in the future today. Thereafter you will be billed R75 per month. You can cancel anytime and if you cancel within 14 days you won't be billed.
Subscribe to News24
Related Links
Skin-lightening: Case studies
Dying to be white
Next on City Press
Jamie Bartlett – the best villain to grace our screens