Art is once again at the centre of controversy.

Artist Ayanda Mabulu has sparked outrage with a crude painting that depicts a nude President Jacob Zuma seemingly enjoying an act of group sex. It has been slammed as pornographic and tasteless.

But in Joburg, art of a different form is making a powerful statement. Graffiti artists make their mark on walls across the city, spray-painting murals that communicate silent, sometimes confusing, but strong messages. Street art, once seen as a nuisance, has been embraced by major cities like Melbourne and Berlin as part of their cityscapes – and as legitimate art. Photographer Elizabeth Sejake captured a few murals in and around the City of Gold Cute and Dangerous: The walls of Braamfontein are a favourite spot for graffiti artists. This mural on De Korte Street, in a similar style to the one in Kliptown, shows a cross between an innocent girl - signified by the red bow – and a superhero or villain Give us a Kiss: This artist chose a wall in Auckland Park, close to Melville’s trendy 7th Street, as the perfect spot to create this near-cubist mural that fuses an array of colours and artistic styles Ruling the Rooster: Under a bridge in Kliptown is this extraordinary mural of a green-haired woman. Her stretched forefinger connects with that of a rooster. It’s unclear what the artist is trying to depict here, but it still looks pretty cool 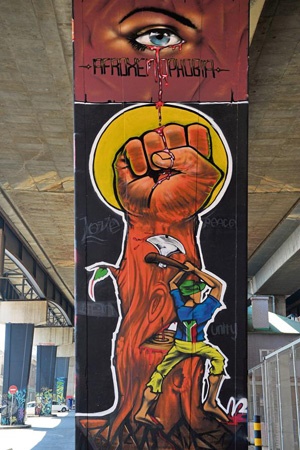 Hurting Ourselves: A powerful anti-xenophobia mural under the M1 bridge on Henry Nxumalo Street in Newtown. Bloody tears roll from a single eye on to a tree trunk that morphs into a clenched fist. The tree is under attack from a man with an axe. Under the teary eye is the inscription ‘Afroxenophobia’ with the ‘no’ emphasised A Marvel: This mural on De Korte Street in Braamfontein, close to Wits University, evokes the vivid emotions of the colourful comic-book-styled characters on display Come Here Often: Joburg’s cultural precinct, Newtown, is a bohemian space that encourages artistic expression. This mural of a rebellious, tattooed character with rosy glasses and a cigarette stands out