Hi-Tec created 67 pairs of sneakers, called Freedom 67s, to honour the 67 years Madiba spent fighting for the equality of others. Photos: Supplied

Former president Nelson Mandela spent his whole life fighting for the civil rights of black people in South Africa. But he also spent much of that time in a modest pair of Hi-Tec tennis shoes. While that detail was understandably overshadowed by the liberation of South Africa, little did we know that those shoes would be the motivation for positive change 30 years later.

Freedom Shared is a collaborative campaign, led by Hoorah Digital Consulting, which sought to reimagine this heritage sneaker and celebrate Madiba’s legacy during his birthday month.

Mandela not only reshaped and redefined our political system, but he also gave many black South Africans the opportunities his generation was denied.

For the campaign, Hi-Tec created 67 pairs of sneakers, called Freedom 67s, to honour the 67 years Madiba spent fighting for the equality of others. Through the collaborative efforts of its freedom ambassadors, consisting of musician Jimmy Nevis, writer Khaya Dlanga and comedian Schalk Bezuidenhout, among other people, the shoes were presented to the Nelson Mandela’s Children’s Fund, which was founded by Madiba in 1995.

We wanted to do our part in continuing Nelson Mandela’s legacy while paying it forward to the children of South Africa, and empowering a new generation with the message that freedom never goes out of style.

What went into the redesign, according to Spreckley, was meticulous attention to detail combined with digital technology.

“The original shoes were under lock and key, so we needed to recreate the sneakers digitally from various images. We reconstructed the sneakers in 3D software, and proceeded to explore various colourways until we found a design that we felt would really resonate. Working closely with the Hi-Tec design team brought the sneakers to life. We used only the highest quality materials, plush leather uppers and design details that you would only find on top-of-the-range kicks in premium sneaker outlets.” 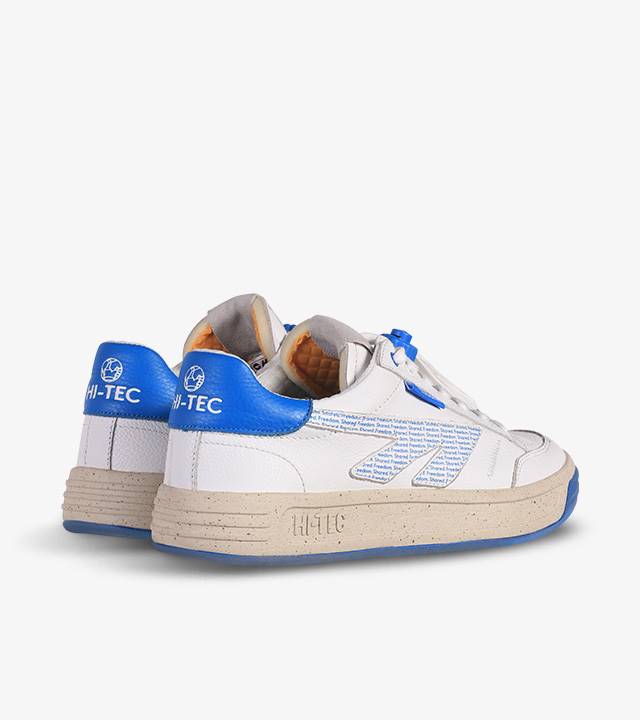 Regarding the colours used in the sneakers, Spreckley emphasised how important it was to stay as true to the original pair of shoes.

“We wanted to bring in modern colours and touch points that would connect with people on a street-culture level. The sole is moulded in a clear blue rubber, representing the transparency of freedom. Embedded within the sole, you will find a symbolic orange sun, as well as a quote from Madiba: ‘The purpose of freedom is to create it for others.’ A closed-fist toggle is used to secure the lace system, representing collective unity and the freedom we hold so dear,” he said. Spreckley hopes the project will positively affect the lives of young people: “Freedom is a universal issue, and something we can’t take for granted. It’s about celebrating the great man’s legacy and making an impact on the lives of South Africans, especially the kids of the Nelson Mandela Children’s Fund. We hope that his commitment to freedom will continue to inspire us for generations to come.”

One of the 67 pairs of sneakers will be auctioned, with the proceeds going to the Nelson Mandela Children’s Fund.

We live in a world where facts and fiction get blurred
In times of uncertainty you need journalism you can trust. For only R75 per month, you have access to a world of in-depth analyses, investigative journalism, top opinions and a range of features. Journalism strengthens democracy. Invest in the future today.
Subscribe to News24
Next on City Press
Kaizer Jr gets hitched again

Sign-up to our newsletters and get the latest results and info in your inbox.
Voting Booth
President Cyril Ramaphosa has announced that SA’s vaccine passport plans are coming on. What are your thoughts?
Please select an option Oops! Something went wrong, please try again later.
We cannot be forced
30% - 72 votes
It’s critical
24% - 57 votes
Vaccines save lives
46% - 109 votes
Previous Results
The best of 2020
Can you guess who featured in our most popular articles from 2020?