While the country is still mourning the loss of legendary jazz icon, Hugh Masekela and the tributes continue to pour in, his son Sal Masekela, nephew Salema, and pioneers of Afro-rock The BLK JKS have reworked one of his most-loved songs, The Boys Doin’ It.

Sal, who appears on the song under the pseudonym Alekesam, said they could not have chosen any other song to celebrate his life. 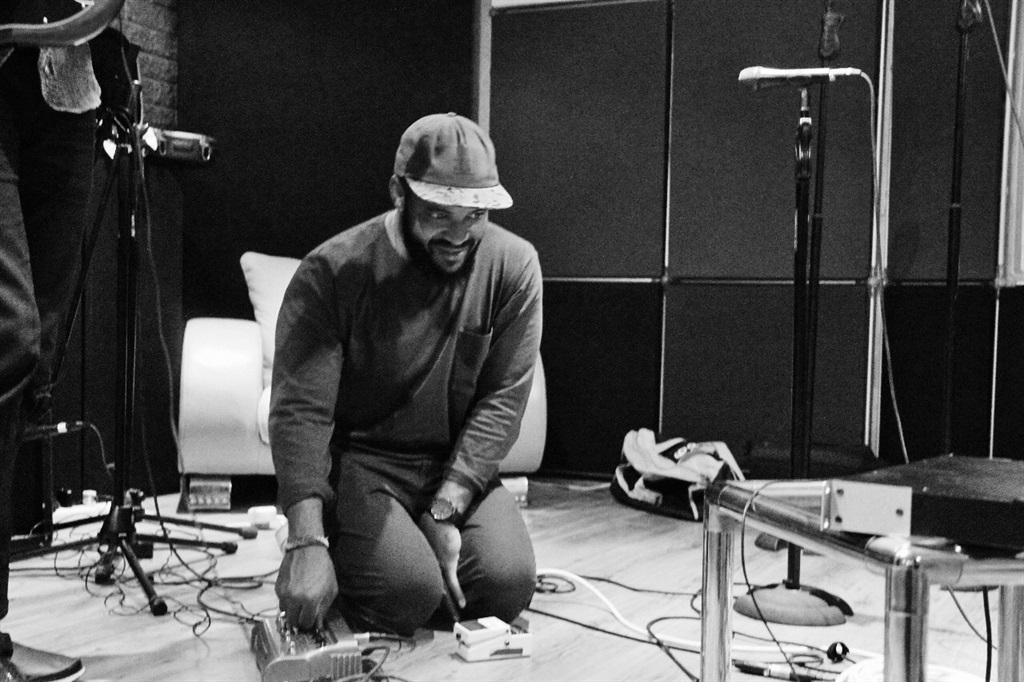 Sal Masekela fine-tuning the sound on what sounds like a righteous cover of a masterpiece. Picture: Supplied

“It’s one of my favourite songs as it captures his ecstatic exuberance for life. I picture him at that period of his life, travelling the world like a madman, hanging with Fela in Nigeria, lapping up all the world had to offer him and just loving life,” said Sal.

He said things had not been the same since Bra Hugh’s passing.

“Things have been heart breaking and heart opening. The loss is immense and continuous, however the manner in which the world continues to honour and celebrate him is magical. In this respect I know he will never die. That said, I still dream about him regularly. Last night, I dreamt that he called me to tell me that he was still alive and just fine. He was laughing his trademark laugh. It felt so real.” Guitarist Mpumi Mcata of The BLK JKS said: “It’s one of those things when you’re going through the catalogue of the legendary man himself and this stood out. I’m not sure what it is about it but this is the one we ended up playing together.”

Charismatic drummer Tshepang Ramoba said it made sense to them to do this song, “especially after Bra Hugh told us about some of the bands he encountered in basements in New York City”.

“He liked the hardness of that rock music and he felt that this song had some of those elements to it, and that maybe we could inject some of that,” said Ramoba.

Lindani Buthelezi, who also plays guitar for the BLK JKS, said: “We’ve put a bit of our own flavour but we tried to keep it the way it sounded when we played together. A touch of BLK JKS and a touch of Bra Hugh and of course Alekesam as well as Selema who did a bit of a rap. It’s a real homage.”

The collective had been given the go-ahead by Bra Hugh and it was originally meant to include him too. “Then of course he left and we’re trying to complete the plan as he had wanted and having his family involved was a blessing,” said bass guitarist Molefi Makananise. The BLK JKS are locked in recording sessions at the Soweto Theatre and they couldn’t be happier. Picture: Mpumelelo Buthelezi

Sal, who has been making music as Alekesam since 2011 said: “I’m excited for both the song, video and limited edition vinyl for The Boy’s Doin’ It tribute which drops on June 29 around the world. My second Alekesam album Sound Proof Heart will drop on August 10. It features the song In An Age featuring my father, which we recorded in Los Angeles two summers ago. It was our mutual dream to do a record together and we were both thrilled to make that dream a reality.”

Tshepang said The BLK JKS are also in album mode:

“We are recording an album in Soweto which is an honour. Our first EP was recorded at Electric Lady Studios and our first album in New York. We did a lot of recording outside our world and now we’re home and doing the album which is halfway done. We’re just getting back on the horse and these are exciting times.”

The electrifying band who are preparing for a performance at the upcoming Basha Uhuru Youth Festival at Constitution Hill on June 28 also have an EP with Thandiswa Mazwai or King Tha as she is referred to when performing with this collective.

“We met at parties and she would come to our shows. Mam Busi Mhlongo, on her death bed, called Thandiswa and said ‘sister these are your brothers and brothers this is your sister.’ That started the working relationship where King Tha vs BLK JKS was born. We’re connected by the legacies of Bra Hugh and Mam Busi.”

We live in a world where facts and fiction get blurred
In times of uncertainty you need journalism you can trust. For only R75 per month, you have access to a world of in-depth analyses, investigative journalism, top opinions and a range of features. Journalism strengthens democracy. Invest in the future today.
Subscribe to News24
Related Links
The best anthem for Workers' Day? 'Stimela' -- a tale about apartheid's migrant labour system
Editorial: Celebrate our artists while they are alive
Gallery: Bra Hugh honoured with musical tribute
Next on City Press
Demi The Doll: On dating as a trans woman and backlash from that scandalous affair