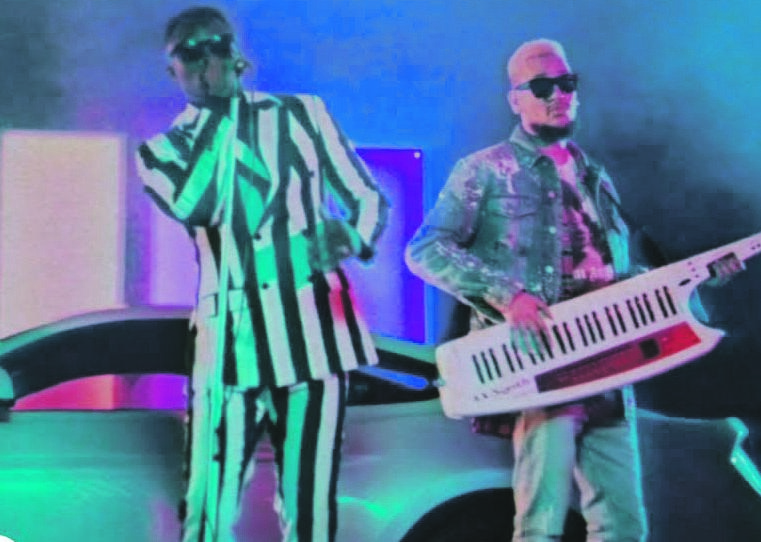 You can’t fake the funk: Tressor and AKA dispense some groove on this track with its vibey video. Pictures: supplied

Two new videos dropped last week and they both feature AKA. Phumlani S Langa checks out Electric Night by Tressor and Jika by AKA.

Return of the funk

Led by this snazzy duo, we return to the days of funk as they bring us a night of music with an undeniable groove – much like this catchy track.

It’s a disco or club night hosted by Tresor, who wears an old-school black and white suit with AKA stroking the ivories on a keytar. This is the first video off the album Nostalgia.

AKA is on stage waiting for Tresor, who pulls up in a mustang and they proceed to perform. Neon lights shower the room as pretty women spin around on the dance floor and lose themselves in the beat. It isn’t complex, but there’s some style to it.

Usually, when a singer features a rapper, the rapper comes in and raps. Not AKA, who comes through with autotune notes. I don’t even recall what the brother’s voice sounds like any more.

After this underwhelming verse, Tresor leaves the club for some photography that almost looks aged and invokes a sense of the 80s as he strolls around the streets of Melville, Joburg. He’s then chased from the club by some attractive women.

To elude them (though I’m not sure why you would want to do that), he’s forced to transform himself into a black panther. This transformation is shown in shadow. CGI was used for this shot, but, because it’s just the powerful cat the producers use it on, it looks good.

Adrone flies the viewer up to a fancy resort or retirement home by the sea, where Yanga and AKA appear as old timers with grey in their hair and slight humps in their backs. This is the latest visual offering from the pop record Touch My Blood.

I’m sure the aim was to be sweet and cute as AKA sings: “Any day your life will flash before your eyes.”

The pair try to win the affections of two nurses at this retirement home and perhaps convince them into a sponge bath or walk around the garden. This is just mad silly – I’ve never seen an old man with braids like Yanga’s.

After this pointless moment in the video, the two appear on screen looking more like themselves again at what seems to be a Mardi Gras-inspired street bash with an African flavour.

Aside from reference to that one line from AKA, I don’t really get the story of this video, and it’s weak.

We live in a world where facts and fiction get blurred
In times of uncertainty you need journalism you can trust. For 14 free days, you can have access to a world of in-depth analyses, investigative journalism, top opinions and a range of features. Journalism strengthens democracy. Invest in the future today. Thereafter you will be billed R75 per month. You can cancel anytime and if you cancel within 14 days you won't be billed.
Subscribe to News24
Related Links
New video drops from Nasty, Stogie and Riky
Style delivered to your front door
It may be time for a tyrant
Next on City Press
Jamie Bartlett – the best villain to grace our screens