Bathu, the local shoe brand we can all get behind Theo Baloyi was hellbent on bringing his dreams to reality and walking his journey, as the brand’s slogan suggests. Sounds like sentiments that we could get behind. Picture: Supplied

Bathu is a local shoe brand that is quickly rising to the top of the purchase list for sneaker heads who support local. Phumlani S Langa meets the man behind the brand.

A few of South Africa’s brightest stars have been spotted wearing a local brand of footwear by the name of Bathu, which is street slang for shoe. The likes of Somizi Mhlongo Motaung, Khanyi Mbau and Black Motion are smitten with these drippy sneakers – a few of their designs have a drip-like effect used to colour the shoe.

#Trending reached out to Bathu owner Theo Baloyi this week to find out a little about this shoe and how we could go about getting a pair. He and his team were gearing up for the launch of their tenth store, in Nelspruit, which happened yesterday.

The determined entrepreneur has been pouring his heart and soul into this brand he loves so much. The idea came to him in 2009 while living in Alexandra and studying towards a degree in accounting. That and eventually finding employment and getting to work abroad is what planted the seed for Bathu.

On his travels and in growing his own shoe collection, Baloyi noticed that a quality African sneaker was missing. After much trial and error, he was able to find a way to bring the vision of a sneaker that tells the African story to life.

“I started from humble beginnings. I’m an accountant by profession,” he told us over the phone.

“I worked for PwC here for two years and in the Middle East for three. This was when I noticed, as I fancy myself a sneakerhead, that in my collection I didn’t have a brand from Africa.”

He cites an old African adage that says if you spend so much on it, why not own it? This is what he did in 2015 and his brand has been successful ever since.

Fast-forward a few years and this endeavour has turned out to be so fruitful for Baloyi that he even garnered the award for young entrepreneur of the year last year at the SA Business Premier Awards and made the Forbes Africa 30 Under 30 list in the same year.

Street brands rely heavily on urban myths and legends, and on associations with great athletes and supreme artists. Bathu’s niche resides in a state of mind that is probably the most prevalent in a city like Johannesburg – the hustler’s ambition. A sneaker head on a mission | Theo Baloyi came across as a busy man who has a firm vision in sight and part of that, you can rock on your feet. Picture: Supplied

“I was fortunate enough to work for this big company, but each time I went back to ekasi I saw my brothers and sisters struggling. And so the primary idea was to create sustainable jobs in these communities.”

Baloyi has taken strides in doing this by employing more than 60 people from Alexandra and recently acquiring a 3 700m2 warehouse in Centurion.

This idea of manifesting your dreams into reality is the spirit of Bathu.

As for the light mesh material that the shoe is most identified with, Baloyi says: “I can’t draw to save my life. I had this idea of building a shoe that could bring ventilation to anyone who wore it, and that’s our Mesh edition. We did 21 samples and got declined 13 times before the factory gave us the go-ahead.

“Ofentse Mokgatlhane does our creative design and anything related to that. There was a trend around 2016 with the sock brand Happy Socks, and we wanted to complement that colourful design with a shoe like that. So I thought, why not?”

The materials are all sourced and made locally to create the unisex low-cut kicks that adhere to local tastes as we love our Vans and Chucks. Bathu also offers the Journey range, which replaces the mesh with leather.

“We manufacture in Durban and, with the growth of the business, we want to diversify and are looking to go overseas. We want to be the best and compete by pushing our designs,” Baloyi says.

He also mentioned plans in the pipeline to take the Bathu brand east in the hopes of finding markets that will push his creativity and afford him even more of a chance to innovate. 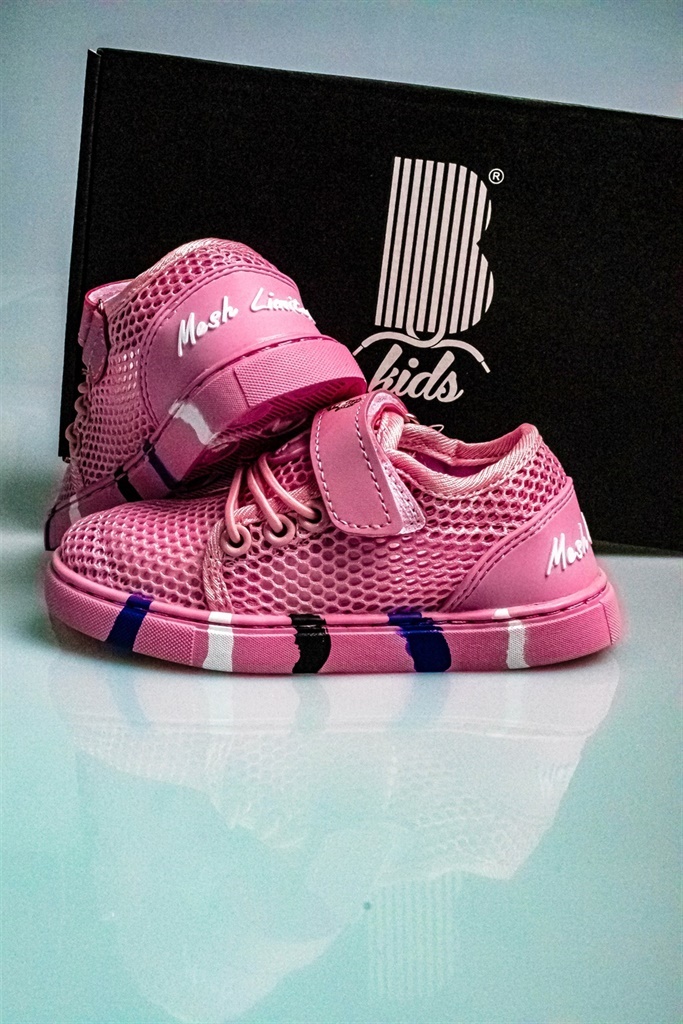 “I was fortunate to be embraced by South Africa. One of the guys who was an advocate for us at the start was Somizi. Now we have Khanyi Mbau, Black Motion, DJ Sbu, Benni McCarthy and Itumeleng Khune – people who all identify with the story that the shoe tells.”

Of course, we had to enquire, especially in this time of a global pandemic and being that the brand is black-owned, what he’s finding challenging about conducting business in the new normal.

“It’s been difficult. We had big plans for the year, and we wanted to move spaces and expand our retail footprint. Those plans are delayed, but we’re moving to our headquarters in Centurion. It was a hard six weeks of losing revenue, but we stuck it out. We at Bathu believe in people before profit. We had to let some people go initially, but now we’ve been able to rope those people back into the business as they’re important to the brand.”

Bathu sneakers range from kiddies’ cuts at R800 to the Mesh edition at R1 200, while its Journey edition comes in at R1 700. The brand has stores all around the country, including in Port Elizabeth, Bloemfontein, Kimberley, Thohoyandou, Polokwane and Rustenburg.

Baloyi and his team would like to celebrate the opening of their 10th store by giving five lucky readers the chance to win a pair of Bathus.Simply answer the question: What is Bathu slang for? Text the answer, your name, surname, email address and delivery address to 34217. SMSes cost R1.50. Free SMSes do not apply. Terms and conditions apply. Choose a newsletter
Voting Booth
Will the move to alert level 1 change the way you approach your personal and professional life?
Please select an option Oops! Something went wrong, please try again later.
No, already living the ‘new normal’
49% - 68 votes
Yes, I can finally emigrate
20% - 28 votes
Yes, my business can finally thrive
4% - 5 votes
I just wanna do the Jerusalem challenge
6% - 8 votes
No, I am still scared
22% - 31 votes
Previous Results
Podcasts
Should I pay extra into my mortgage with these lower rates?