Would you eat a fruit salmon bagel? A salmon bagel: There's no salmon in this bagel and it's still really good Pictures:supplied

When it comes to a diet that is both healthy and environmentally sustainable, plant-based seems to be the way forward. Phumlani S Langa finds a salmon bagel with a vegan twist at an exciting new eatery in the east side.

I got a strange email a few months ago from a restaurant that specialises in plant-based cuisine in Bedfordview. The subject line “The tale of the salmon bagel”, piqued my curiosity.

This dish is served at an eatery called Kaylee’s, which is attached to two other businesses owned by the same family that occupy one roof at the Comic Warehouse. On North Reef Road, it was built to be a comic store that you walk through before getting to Kaylee’s. The warehouse boasts an old-school vintage car collection that includes the first car made, the Model T-Ford, as well as a quaint bakery.

My friend and I walk through the comic-book store and marvel at the trinkets and collectors’ items it has to offer.

Kaylee’s is minimalist in décor, a simple café set-up that has a welcoming feel. Kaylee Gottschalk is behind the counter and smiles as she greets us. She is quite young for a business owner. We sit down and chef Joshua Simon joins us. He’s cool and very skilled. 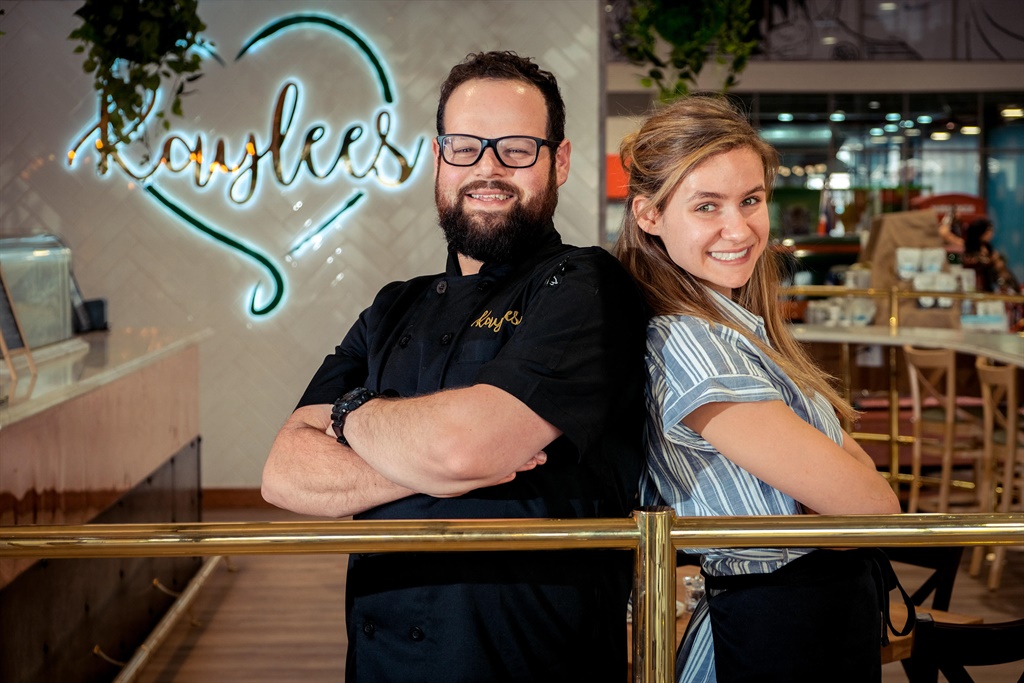 The pair sit with us and unpack their menu and the refreshing but odd combination of a comic store, a bakery and a plant-based diner.

The bagel I mentioned, called the Lox (R72), is made with papaya and it is one of the most tricksy meals I’ve had.

You would swear you were eating salmon.

If someone served this to you without telling you of the lack of actual fish, you would have no idea.

Kaylee mentions that some people have enquired where they can buy this lovely tasting salmon. The fruit store.

Kaylee and her head chef cleverly steer the conversation towards what we should try out at the shop. Everything is made in-house, and they make essential ingredients from scratch so that most of the menu is fresh daily.

I try an Ultra Violet juice (R48) that is made of red beetroot, blueberries, cucumber and red cabbage.

Kaylee warns me that this drink is a little intense but I couldn’t get enough of it. I even felt a bit of a buzz after finishing it.

I wanted to try kombucha but they had run out.

“This fermented product is fairly new to South Africans. We put the Nature’s Choice one on our menu. It tastes a bit like Hunter’s Dry, without the alcohol, or Appletizer.” Josh is a classically trained chef who has worked all over the world and can cook across a wide spectrum of foods.

“I felt like there was an opening in the market for vegan food and Kaylee’s approach is one that drew me in,” he says. “We just hit it off and cooked together. We just want to make vegan food accessible to people who aren’t necessarily vegan.

I’m not going to lie, the word vegan can be a turn off. No milk, no cheese, no eggs … it doesn’t sound inviting, especially to a proud Zulu. The bagel, however, was a delectable delight.

Kaylee and Josh have built a culinary collaboration in which Josh presents an idea – such as pulled pork – and Kaylee will take the idea and find the suitable replacements for the pork. They went for jackfruit.

“We hope people have a different experience here; people like new and fresh ideas and this is one of those,” says Kaylee.

Later, we’re joined by Dan Friedman, the marketing mind behind this lifestyle centre, who informs us that the best days to come are the weekends.

“We’ve just added reservations to what we’re doing, but usually it works on a first-come first-served basis,” he says.

I ask Kaylee about the cost of eating vegan.

“A vegan lifestyle can be expensive. Fruits and vegetables are cheap but if you want to buy organic products then the prices are higher. We’re lucky that we don’t have salmon in the fridge that can go off, we use papaya. The most expensive thing I’d say are the nuts.”

Their prices are quite reasonable nevertheless and this would make a really nice date venue.

After the chat Josh brings out two Beyond burgers that have no meat in them whatsoever, but trust me, it was hard to tell. They make their own meat substitutes and even cream cheeses.

They’re open every day of the week from 8am to 5pm and on Sunday they close at 3pm. I’ll be back over there with my meat-eating self.

We live in a world where facts and fiction get blurred
In times of uncertainty you need journalism you can trust. For only R75 per month, you have access to a world of in-depth analyses, investigative journalism, top opinions and a range of features. Journalism strengthens democracy. Invest in the future today.
Subscribe to News24
Related Links
What you didn't see on camera at the SAFTAs
Sisters of sport: Kass Naidoo, Mpho Letsholonyane and Julia Stuart
Gutter gags at Roast of AKA
Next on City Press
R500 000 lawsuit: Accuser to challenge DJ Fresh

Listen to our latest podcasts.
Voting Booth
This week the ANC lost all the Gauteng metros to the DA. Do you think it stands a chance at winning national elections in 2024?
Please select an option Oops! Something went wrong, please try again later.
Yes, it has loyal voters
29% - 90 votes
This is the end for the ANC
56% - 176 votes
LGE means nothing
15% - 48 votes
Previous Results
The best of 2020
Can you guess who featured in our most popular articles from 2020?