Everything is broken, including the law Pistorius and a police officer outside court.

Even after listening to Judge Thokozile Masipa and reading the opinions of numerous criminal attorneys, legal academics and analysts, it’s still difficult to reconcile the six-year sentence Masipa handed down to convicted murderer Oscar Pistorius this week.

It’s difficult to feel that the decision was right, and although what we feel is perhaps not what the law should concern itself with, it is worth asking where this strong sense of injustice comes from.

What is the pernicious and worrying status quo we had hoped we would see a departure from in the treatment and outcome of this case?

This week, journalist Greg Nicolson wrote: “Judge Thokozile Masipa was careful to explain her reasons, but it’s hard not to connect it to the current state of South Africa.”

The more I think about it, the more I am convinced that the widespread disappointment and outrage is less about logic and rational explanations, but more about the hope (maybe unfairly and unreasonably) that the judicial system would manage to do what so much of South African life continuously fails to do – disrupt a status quo that is defined by inequality.

It’s possibly the greatest tragedy in a country founded on principles of equality and freedom.

Some might correctly argue that meeting our hopes and aspirations is not the job of the judicial system, but the outrage we feel is also not unreasonable in a society where direct and indirect discrimination are endemic, where women constantly face both overt and subtle reminders of the insignificance of their lives, and where justice for gender-based violence remains elusive.

It’s a country where being poor not only increases the likelihood of contact crime, but also means that if you are poor, you are likely to serve a longer sentence as wealth continues to determine the ability to make full use of the appeals process, leading to a reduced sentence or even the reversal of a conviction.

By dismissing the public outrage around the Pistorius judgment as simply a lack of understanding about how the law actually works, we ignore that the outrage is rooted in a real concern about our values, many of which seem to be missing – both inside and outside the courts.

It might have been unfair to project all that expectation on to one case, but perhaps if there was evidence in our society that class, race, gender, sexuality and physical ability do not determine a person’s freedoms and rights, that wouldn’t be the case. 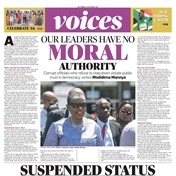 Read more on:
judge thokozile masipaoscar pistoriusinequality
ON MY RADAR
for subscribers
On My Radar | Take care as you step into the metaverse

Choose a newsletter
Voting Booth
What are you doing to celebrate Heritage Day?
Please select an option Oops! Something went wrong, please try again later.
Nothing, locking it down
79% - 30 votes
It's braai day
11% - 4 votes
The Jerusalema dance
11% - 4 votes
Previous Results
Podcasts
Should I pay extra into my mortgage with these lower rates?