In Winnie’s name, we will hand the ANC back to the people 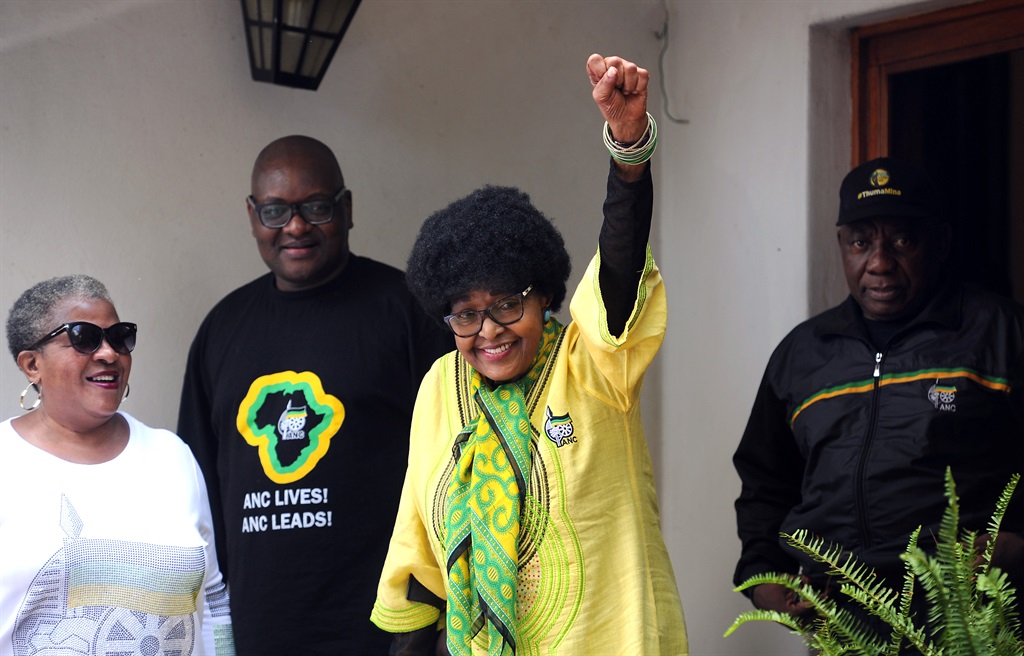 Winnie Madikizela-Mandela was an ANC stalwart to the end. Here she is pictured in March this year at her home with Gauteng Premier David Makhura and President Cyril Ramaphosa. Picture: Felix Dlangamandla/Netwerk24

The love of the mother is a language well-known to a child’s heart.

We are indeed motherless without Mama Winnie.

Mama Winnie – a soldier, gallant freedom fighter, radical cadre, comrade and a mother to the end.

South Africa, Africa and the world are at a standstill as they grasp with the untimely death of Comrade Winnie Madikizela-Mandela.

This is one of the greatest icons against apartheid, who led a gallant crusade against slaughterers and oppressors when cowardly men ran away.

A member of the generation of the watchword “Freedom or death, victory is certain” has departed from this African flora and fauna of the globe.

This great heroine, a revolutionary who was guided by true feelings of love for the struggle of the poor of the poorest, shall obviously be remembered for her bravery, resilience and huge sense of humour.

She was a lioness who was admired worldwide for fighting the guns and senseless brutality of the apartheid state with her bare hands, her courage, and her noble qualities.

She was indeed a true feminist heroine.

She never fell apart, notwithstanding the rough treatment and persecution by men who were descendant of settlers in her motherland.

Mama Winnie was more popular than a politician; she loved her people to the end.

She was a mother and father to all, but was known as the mother of the nation, produced by the struggle of her own people.

She was a social giant – she wanted all to realise their security and comfort, to have food on the table and a roof above their heads.

Her name continued to resonate justice, freedom and liberty for all.

Comrade Mama Winnie Madikizela-Mandela, you are a one-off source of history and obviously your fallen spear is too heavy to pick up.

Mama Winnie please, as you arrive in heaven, tell Nelson Mandela, Oliver Tambo and Albert Luthuli that their ANC of more than a century was nearly sold to foreigners in less than a decade under the leadership of your fellow comrade President Jacob Zuma. However the ANC was saved by members who were fearless like you.

Tell comrade Tsietsi Mashinini, Ruth First, Stanza Bopape, Ngwako Ramalepe, Nokuthula Simelane, Chris Hani and Solomon Mahlangu that their supreme sacrifice was nearly undermined by a competition of state resources and politics of the stomach crusade, which is commanded mostly by peace-time heroes and individuals with questionable political backgrounds.

Comrade Mama Winnie Madikizela-Mandela, in your name and honour we shall reclaim the ANC glory and hand it over back to the people.

• Sello Shai-Morule is an ANC Member, writing in his personal capacity.

We live in a world where facts and fiction get blurred
In times of uncertainty you need journalism you can trust. For only R75 per month, you have access to a world of in-depth analyses, investigative journalism, top opinions and a range of features. Journalism strengthens democracy. Invest in the future today.
Subscribe to News24
Related Links
The grandmotherly neighbour vs the guerilla fighter: Two sides of Winnie
Brilliant wisdom, fierce beauty: Graça pays tribute to her ‘big sister’ Winnie
‘Winnie showed that you don’t need a gun or be a man to liberate SA’
Next on City Press
Voices | Funding must be allocated to treat drivers of HIV