Inauguration at Loftus? ANC is trading gold for brass 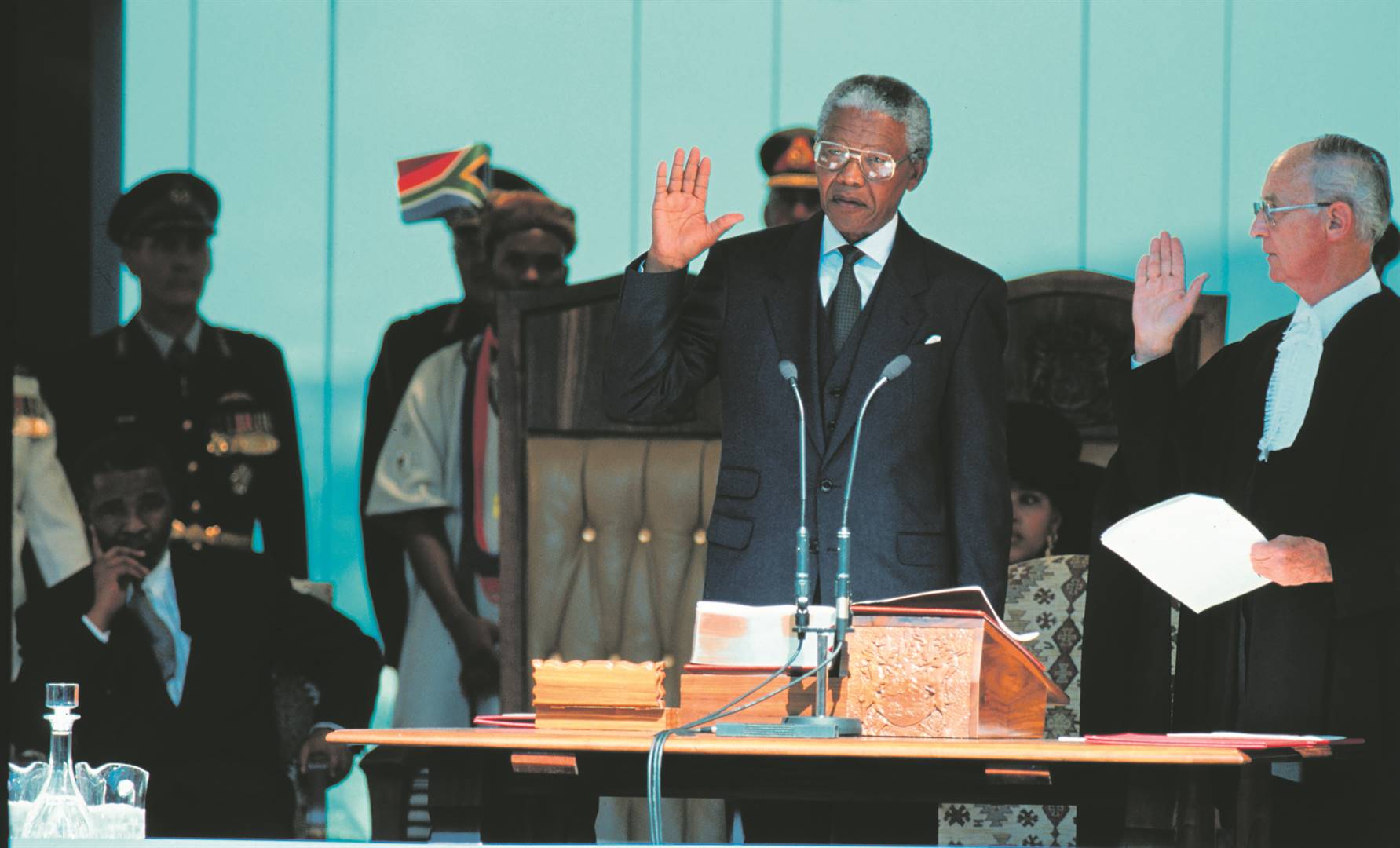 President Nelson Mandela at his inauguration on May 10 1994 at the Union Buildings in Pretoria Picture: Gallo Images / Sunday Times / David Sandison

Institutions such as the Union Building may be a painful inheritance from an ugly past, but treating them shabbily is needlessly self-destructive, writes Letepe Maisela.

Recently, I was shocked, dismayed and even somewhat sadly amused when I learnt that our government had decided to swim against the tide of tradition and hold the upcoming presidential inauguration in a rugby stadium.

At first I checked my calendar because I seriously suspected it could be one of those April 1 spoofs.

The tradition I am speaking of is that since the dawn of our democracy in 1994 our presidents elect have all taken oaths of office at the historic Union Buildings in Pretoria, witnessed by multitudes on the front lawns.

The new administration, however, has decided to buck the trend and opt for Loftus Versfeld Stadium in central Pretoria.

Inauguration usually attracts thousands of members of the public, including country presidents, and heads of diplomatic missions, as well as representatives of international bodies such as the Southern African Development Community, the AU, UN and even royalty.

According to the presidency spokesperson, “hosting the inauguration in the 51 000-seater stadium, which is the largest in the City of Tshwane, will allow for greater public participation in this important national event”.

I could not easily decipher how the public participates in the presidential inauguration, except as spectators, dressed to kill and applauding wildly. I should know, since I have attended quite a few.

But if the new government wanted a bigger venue for greater public participation it should have opted for the 100 000-seater FNB Stadium in Nasrec, near Soweto.

I vividly remember attending my first inauguration event. This was after South Africa’s first democratic elections in April 1994. The event took place at the Union Buildings on May 10.

At the mature age of 75, watched by multitudes at the venue and across the world on TV, the revered Nelson Mandela took oath of office led by Justice Michael Corbett, the last chief justice of apartheid South Africa.

Conspicuous by her absence from Madiba’s side was his estranged wife Winnie Madikizela-Mandela. In her place was the couple’s eldest daughter, Zenani, who accompanied her father to the podium.

The Union Buildings were subsequently endorsed as the venue for future inaugurations with presidents Thabo Mbeki and Jacob Zuma.

It is sad that this august venue suddenly finds itself being disqualified in favour of a rugby stadium.

The Union Buildings are part of a rich South African history. They were erected way back in 1910 after popular architect of that era Herbert Baker was commissioned to design them in 1909.

The venue was set to become the new administrative centre for the Union of SA, formed on May 31 1910.

The new state was formed after the unification of the Cape, Natal, Transvaal and Orange River colonies.

One of its most damaging legislations remains the 1913 Native Land Act which awarded the European settlers 83% of the land, leaving Africans with only a meagre 13% of land in their possession, but I digress.

The Union Buildings, though not in the centre of Pretoria, occupy the highest point of the city. Views from atop the buildings are sweepingly majestic and domineering over the entire city.

They have become an iconic landmark of Pretoria and South Africa, and are said to be one of the most popular tourist attractions in the country.

One is thus at pains to justify how this architectural marvel and historical site can be dumped by our new administration in favour of a mere stadium, which simply lacks decorum for such an auspicious occasion as a presidential inauguration.

If the next national elections are won by the EFF we might have to trek to Polokwane’s Seshego Stadium, where the “people of the soil” are also dying to attend an inauguration.

There is hardly even a view to admire from Loftus Versfeld. It looks as though as a country we are slowly sliding into a mud of sophistry, as I find it difficult to imagine how the aura of the Union Buildings can be recreated at a rugby stadium.

This change of inauguration venue is a simple sacrifice of ambience for mediocrity.

The Union Buildings might be an inheritance by our new democratic government from a painful colonial and apartheid past, but, as with similar structures around the country, we are now the rightful inheritors and must be equally embraced.

I am becoming increasingly alarmed by this creeping tendency in South Africa, by the leadership tampering with established traditions to assert their new power positions.

It started with Zuma when he changed the timing of the state of the nation address (Sona) from daytime to evening.

Like the inauguration’s envisaged changes, this was done to “accommodate the majority of South Africans to watch the event from the comfort of their homes”.

What they forgot was that most South Africans would rather watch the Tshivenda soapie Muvhango to de-stress after a hard day’s work rather than endure a long and winding speech.

That radical change in timing also put to bed commensurate networking opportunities between private and public sectors, which used to flow after the address.

After the long Sona speech these days attendees cannot wait to get back to their homes and hotel rooms.

People of Mzansi, you have been forewarned. If the next national elections are won by the EFF we might have to trek to Polokwane’s Seshego Stadium, where the “people of the soil” are also dying to attend an inauguration.

If the DA wins then it will be off to Bonteheuwel Community Hall in Cape Town. Were the United Democratic Movement’s Bantu Holomisa to win, then Mthatha showgrounds here we come!

My humble wish is that practices such as the inauguration and Sona be entrenched constitutionally, so that they cannot be changed at the whim of politicians hoping to upstage the opposition or their predecessors.

Maisela is a published author and management consultant

Do you think moving the upcoming inauguration will foster greater public participation or is a cheap trade-off?

SMS us on 35697 using the keyword INAUGURATION and tell us what you think. Please include your name and province. SMSes cost R1.50. By participating, you agree to receive occasional marketing material

We live in a world where facts and fiction get blurred
In times of uncertainty you need journalism you can trust. For 14 free days, you can have access to a world of in-depth analyses, investigative journalism, top opinions and a range of features. Journalism strengthens democracy. Invest in the future today. Thereafter you will be billed R75 per month. You can cancel anytime and if you cancel within 14 days you won't be billed.
Subscribe to News24
Related Links
An emotional Ramaphosa officially elected president – uncontested
Cyril factor saves the ANC
ANCWL backs Cyril for two terms
Next on City Press
Vusi Mona | Investing in women ensures richer economies, societies and communities