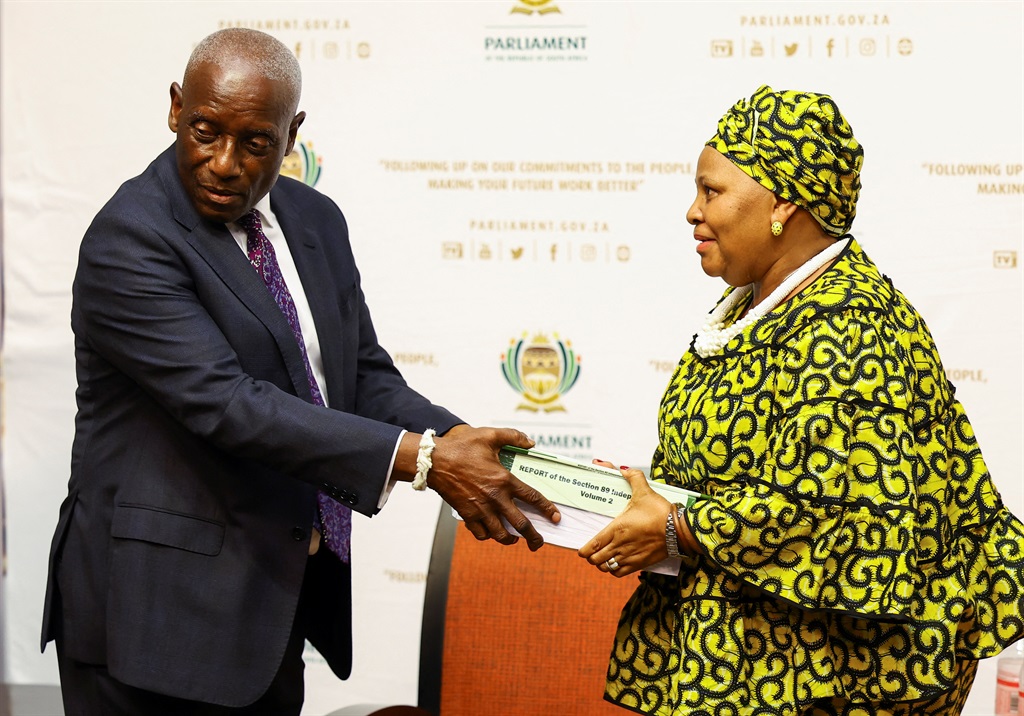 South Africa's former Chief Justice Sandile Ngcobo hands over the report to the Speaker of Parliament, Nosiviwe Mapisa-Nqakula, on whether or not President Cyril Ramaphosa should face an impeachment inquiry over the Phala Phala saga in Cape Town on November 30 2022. Photo: Reuters/Esa Alexander

The section 89 panel report has exposed some of the major shortcomings in the manner we seek to hold the executive accountable. More importantly, it shows the dangers of deploying emotions in serious matters, which may torpedo our Constitutional project.

In 2016, Umkhonto WeSizwe veteran Joel Netshitenzhe said: “Lest we forget: the beneficiaries of corruption and state capture will not give up without a fight. South Africa cannot afford to be complacent!”

South Africa is not going down. We are not in a boat in the deep blue sea. Two weeks ahead of the 55th ANC Conference and 18 months towards national elections, investors calculate and mitigate the political risk. The rand plummeted by 5% slight margin. Most South Africans still look up to President Cyril Ramaphosa as their head of state and the one who has led the country out of the deep sea of corruption, fought against Covid-19 and strengthen the security cluster and law enforcement agencies. On Wednesday, I felt President Ramaphosa did not deserve this and must resign, but on second thought, the president must not throw a towel or be frog-marched out of office based on untested findings.

At this point, no one has or can say beyond reasonable doubt that our president, Cyril Ramaphosa, is guilty of anything related to Phala Phala. The key problem is that there remain serious questions that are not answered and the president cannot take us into confidence and explain, maybe because he himself was not at Phala Phala and he is neither Mr Rhoode nor Mr Hazim nor Mr Chauke nor Mr Von Wielligh nor Mr Frazer. Unfortunately, the more time it takes to answer these questions, the more damage to the ANC, the president and the judicial processes.

The doubt regarding these key questions and assumptions or inferences drawn by the section 89 independent panel appointed by the National Assembly presents a major gap for the opponents of the president and other opportunists to launch attacks on the president. The panel's conclusions are based on assumptions that the allegations of Fraser will be substantiated with plausible evidence.

This does not sound correct in law. Why should they have declared the inadequacy of the evidence as the reason for their inability to conclude instead of coming up with twisted statements like: “…one can't assume the actual evidence of Fraser will not be presented at the right time....one can't ignore it....”

The section 89 panel report has exposed some of the major shortcomings in the manner we seek to hold the executive accountable. More importantly, it shows the dangers of deploying emotions in serious matters, which may torpedo our Constitutional project. It is clear that Phala Phala is not the real issue in this ongoing saga or that the president or any member of the executive must be held accountable.

The real issue is rather a power struggle involving many forces. The fact that some caused so many investigations to be conducted but hardly had the patience to wait for the investigations to be concluded raises serious questions about how we are to handle matters which impact our national stability. Our situation is compounded by the fact that detractors of the president and aspirants for his office have found new courage to opportunistically ride the wave of what appears public dissent when in fact it is about their self-serving interests.

There cannot be any doubt that the president, as with any leader of society, must be held to account and to the highest standard of ethical behaviour. Society does not owe any leader sympathy if that leader fails to uphold his or her responsibility to the nation. However, it is equally important that the same must happen within the framework of our law and Constitution.

Accountability must not be used and exploited for narrow self-interest. It is good that the National Assembly established a section 89 panel and even granted it an extension when it so requested. It is also good that the report was handed over in full view of the public and that it was later made public. South Africans have the opportunity to read for themselves and make up their own minds.

Unfortunately, the report has exposed an unintended objective. The complainants sought to prove that the president violated the Constitution and committed serious misconduct to warrant his removal from office. As the report of the panel has now confirmed, everything appears to be based on hearsay, speculation and conjecture. When the chairperson of the panel, former Chief Justice Ngcobo, handed over the report, he sought to create an impression that the panel worked spiritedly to sift through words of information which required in-depth analysis and interrogation. He pointedly suggested a statement made on TV that if the panel did not call the Hawks and other investigative bodies, then the outcome may be questionable. He came out strong to state that it was not the mandate of the panel to do so.

Until one reads the panel’s report, his statement makes perfect sense. Surprisingly and in clear contradiction to what the chairperson suggested, the report records that the panel decries the fact that it did not have an opportunity to access information from the Hawks and the Public Protector or the SA Reserve Bank. The report pointedly states that there are many unanswered questions and that it did not have all the information. But the chairperson of the panel publicly stated that they were confined to what the members of Parliament gave them. If that be the case, what would be the relevance of the information held by the Hawks, the Public Protector and others? Does this mean that the panel would have considered that information and if so, what would be the purpose?

It is understandable if the panel felt constrained and limited by the fact that it did not have all the information. However, it is also concerning that even with the clear identification of this serious limitation, the panel nevertheless made serious conclusions. This begs the question of whether this report is complete or whether it can be said to be credible at the least.

Why would people, appointed based on their expertise to guide not only the National Assembly but the entire nation, adopt such a casual approach to such a serious and complex matter? Does this explain why the panel is so non-committal about whether the allegations against the president are sound or not?

The complainants appear to have forgotten that the very Parliament passed a law called the Members Ethics Act. Part of the charges against the president relates to what they allege is his paid work. Section 3 (1) of the Members Ethics Act designates the Public Protector as the functionary responsible for investigating any alleged contraventions of such matters.

Why was it, therefore, necessary to cause this matter to be investigated as part of the work of the panel? Interestingly, the panel of experts appears to have not considered that the law has already prescribed a process to deal with a matter of this nature. Was this deliberate or a genuine error on the part of the panel or is there a justifiable reason for this?

Lumko Mtimde is a former special adviser to the minister in the presidency. He is also an ANC and SACP member.