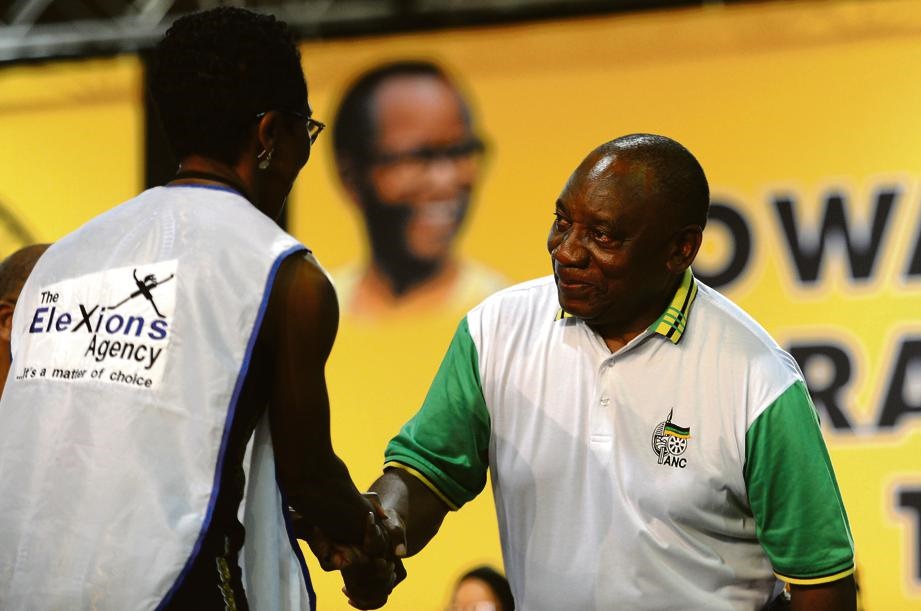 Given the president’s unwillingness to tackle his pro-Zuma rivals head-on, civil society is once again gathering steam to prevent another backward slide

One of the greatest frustrations experienced by football fans is witnessing strikers repeatedly get golden chances to score, only to fluff them by hesitating too much.

At that moment, you will see them throw their hands in the air, clutch their heads in despair and curse like a Swazi man on a Friday night.

That is how much it grates.

This has been the feeling of many South Africans over the past 24 months as they have watched President Cyril Ramaphosa miss clear scoring chances, thus allowing the team that ruined the country back into the game.

It has been an even greater frustration for ANC members and leaders who risked all during the worst years of state capture as they fought for the removal of Jacob Zuma.

The look of defeat on Zuma’s face when Ramaphosa triumphed over Nkosazana Dlamini-Zuma at the ANC’s national conference in 2017 at Nasrec was supposed to have marked the beginning of the end of the bad years.

It was supposed to herald the start of the cleansing of the ANC and, by extension, the country.

On that December day in 2017, South Africa was to have closed the sad chapter that had begun in Polokwane on another December day, this one in 2007, when a once-proud organisation handed its soul over to a known criminal with the moral sense of a thirsty mosquito.

But Ramaphosa turned out to be that striker who constantly fluffs gilt-edged chances.

Few heads of state in recent times – anywhere in the world – have come to power with such abundance of political capital.

When Ramaphosa took the oath of office in February 2018, after Zuma had been dragged out of the Union Buildings kicking and screaming, the overflowing goodwill was tangible.

With the exception of the predictably rejectionist National Union of Metalworkers of SA and its mother body, labour was four-square behind the new president.

As was the business sector, which hoped for a conducive working environment.

Civil society and faith-based organisations gave him the thumbs-up and hoped his elevation would kick-start the return of moral values to the country.

On the continent, there was relief that South Africa’s slide, the last thing Africa needed, was to be halted.

Globally, there were expectations that South Africa would return to the table of respectable nations.

In the beginning, Ramaphosa did the obvious – he moved to clean up the captured and deliberately weakened law enforcement agencies; rid the state-owned enterprise (SOE) boards of dead wood and captured individuals, and set the SOEs on recovery paths; put together a more competent Cabinet under the constraints of maintaining party unity; and made the right – and credible – noises for the ears of domestic and foreign investors.

He could also read his speeches without sounding like a preschooler and could say numbers correctly.

You didn’t need to swallow the New Dawn gumpf to get the feeling that South Africa was on the right path.

In 2018, this place felt hopeful. Until reality kicked in that those were the easy pickings.

After Nasrec, Ramaphosa may not have had a clear shot at the goal, but he was in a good position to get the ball past the defenders.

But he was just not willing to shoot.

In the immediate aftermath of their Nasrec defeat, the pro-Zuma forces refused to accept their fate.

This was best illustrated by newly minted ANC secretary-general Ace Magashule, the standard bearer of these forces, telling a crowd in KwaZulu-Natal just two months after Nasrec that they must “stay focused” and “work hard” because it was just a matter of five years before “the ANC that we know returns”.

And so they stayed focused and worked hard to undermine the new sheriff.

With the 2020 national general council on the horizon, offering the opportunity to land a devastating blow that will ensure he becomes a one-term president come the 2022 elective conference, that faction has let it be known in word and deed that they do not really care much for their president.

The enthusiastic rallying around Zuma during his appearance at the Zondo commission of inquiry into state capture was a big middle finger to Ramaphosa.

In all this, Ramaphosa has been passive, unwilling to take the fight to those who openly undermine or plot behind his back.

His sympathisers make excuses for him by saying he plays a long game; that he does not need to do anything because the long arm of the law will catch up with his detractors.

The problem is, this long game is not really reaping results.

His foes are doing what in Zulu would be called “ukunyelwa yinyoni ekhanda” – basically, having a bird relieve itself on your head because it does not take you seriously and has no respect for you.

But, in being able to not be seen to be plotting to topple the king, Ramaphosa’s foes have found a proxy.

In Public Enterprises Minister Pravin Gordhan, they have a lightning rod.

As finance minister in Zuma’s first Cabinet, he was Mr Unpopular because he and his Treasury team were sizeable obstacles that stood in the way of the state capture project.

He earned the ire of Zuma, many of his Cabinet colleagues and those in the vast thieving machinery in SOEs.

His role during Parliament’s Eskom inquiry, when he was just an MP on the public enterprises committee after his sacking, earned him even more enemies.

Gordhan’s new role in public enterprises – the trough from which the state capturers feasted, and continue to feast and want to keep on feasting from “when the ANC that we know returns” – has not endeared him to a large section of the party.

The fact that he is quite a prickly fellow makes things easy for those who want to paint horns on to his portrait to do so.

He has become the target of conspiracies and tropes, many of them racist.

The assault on Gordhan reached a peak over the past few weeks, with calls for Eskom to be transferred to Gwede Mantashe’s mineral resources and energy department.

The architects of this campaign knew it would get some currency because Eskom is ... well ... an energy company.

Therefore, it would make sense to the common man.

Never mind the fact that this would burden Mantashe, who is not exactly doing a marvellous job in turning around the sick agencies under his care – an impossible task.

Never mind that these games would be to the detriment of the country and its energy security.

Who cares about such minutiae, anyway? Ramaphosa must be weakened, whatever it takes.

Aware that Ramaphosa is unwilling to take the fight to the state capture group, the forces that mobilised against Zuma and paved the way for the incumbent’s elevation are taking it upon themselves to do so.

The first salvo was fired by the stalwarts and veterans, a grouping of more than 100 ANC grey-hairs who issued a statement last week declaring that “the true target” of those who were leading the attack on Gordhan was Ramaphosa.

“A convergence, or ‘unity’, of these individuals and organisations is indeed under way, and is self-evidently designed to bring about the removal of a president committed to rehabilitating the country’s institutions and eliminating corruption,” the veterans said.

They added that the objective of this campaign was for these groupings to prolong the state capture project and regard the Ramaphosa presidency as a mere “interval” before they returned to power and continued their eating.

The stalwarts and veterans were joined by a range of organisations, including the Ahmed Kathrada Foundation, Business Leadership SA and the Legal Resources Centre – all of which also pointed to the fact that the ultimate target was Ramaphosa.

The organisations urged “business, civil society and all South Africans to continue resisting what is clearly a renewed wave of attack by networks leading the state capture ‘fightback’”.

These developments are not insignificant. These were not mere statements from noisy quarters wanting to be noticed.

There has been ferment among those who were involved in the 2016/17 drive to take South Africa back from the Guptas and their plant at the Union Buildings.

Behind the scenes, these initiatives have been coalescing into a movement that will defend the gains of these two years.

Except that, this time, the drive is to defend a head of state who was supposed to be the lead striker for the forces of good, but just didn’t have the confidence and courage to take the shot.

The national general council in June is likely to be a really rough battleground, and the build-up will be just as tough.

What emerges from there will tell us whether South Africa slides backwards or whether life will be breathed back into the stalled momentum.

The battle is joined.