Our Hairitage: The link between black women’s identity and their hair Ask a black woman or black girl about her hairstyle preference, and you will be amazed at the myriad answers you get. Why? Because black women’s identity and their relationship with their hairstyle are intrinsically linked. One cannot exist without the other.

Much like today, during the grooming process back then, hairstyles took hours if not days to create and women used this time to form meaningful bonds with each other.

Hairstyles are constantly evolving as a girl grows into a woman, as fashion trends change, as the seasons change, but, that’s just scratching the surface. Look deeper and you will find that culture, be it traditional, popular or political, holds greater power than aesthetics.

The first documented evidence of dreadlocks dates to ancient Egypt where they appeared in various artefacts.

1444: The first documented slave trade happened at this time. Europeans began kidnapping Africans and trading them on the west coast of Africa. The slaves wore their elaborate hairstyles to Europe. At first, Westerners admired the hairstyles, but they cut slaves’ hair to strip them of their identity and used this to control them. This was considered an unspeakable crime to many tribes. Soon African hairstyles began to disappear as they became more enslaved.

1500s: Africans who hadn’t been captured continued with traditional hair grooming practices. It was to identify social status based on age, wealth, ethnicity, marital status, fertility, religion and death. A little known fact is perhaps how some African tribes embraced the unique characteristics of their hair, that allowed for it to be shaped and moulded, to carry messages. Much like we do today, to relay our unique messages around popular culture, values and beliefs.

Back then, twisting, braiding and weaving using clay mud and animal fat were techniques used to create elaborate hairstyles.

1619: The first slaves were brought to Jamestown in Virginia to from Europe to help their European “masters” colonise the continent. After a three-month long journey to Jamestown, with no means to groom and care for their hair, slaves arrived with matted hair that had to be cut. In addition, slaves were stripped of their grooming tools and treatments when they arrived in the West, but they improvised and used bacon grease, butter and sheep brushes to comb through their hair.

1789: Tigon Laws were established in Louisiana, US, that forced black women to cover their hair with fabric in public. Women then bought elaborate fabrics to wrap stylishly over their hair to adorn themselves. This may have been where iduku (the head wrap) gained its popularity. Today, we use head wraps to cover up a bad hair day or to make a fashion statement.

1800s: In Europe, African slaves were put on display in human zoos because of their unique enslaved hair, physique and skin.

1845: Hair straightening was initially achieved using hot combs and later using chemical treatments. Around the turn of the 20th century, this spawned a booming black haircare industry. Indeed, one of the first black woman multimillionaires in the US was Madame CJ Walker, a successful haircare entrepreneur.

1909: Garett Morgan invented the hair straightener and the press and curl method gained momentum as women and men went to great lengths to adopt western hairstyles. 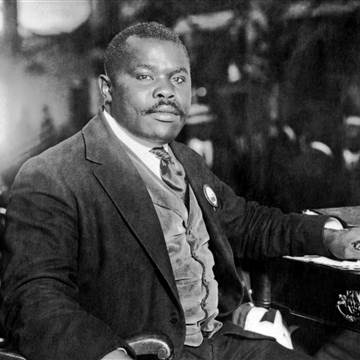 1920: In one of the first documented stance of using hair to make a political statement in modern times, US black Nationalist Marcus Garvey, urged his followers to embrace their natural hair and reclaim their African aesthetic. “Remove the kink from your mind, not your hair,” he said.1930: History dictates that the political revolution continued when Haile Selassie was crowned emperor of Ethiopia and the Rastafarian Movement was born.

1936: Selassie was forced into exile in 1936 after leading the resistance of the Italian revolution. Guerrilla Warriors vowed not to cut their hair until Selassie was released. Eventually, their hair became matted and formed into “natty” locks. People feared and dreaded these warriors and the term “dreadlocks” was coined.

1940s: This era saw the rise again of the press and curl style in the US. It was a time where black women were taught that to get ahead in life, they needed to forgo their natural hair. South African women were not immune to the adoption of these western ideals of beauty and used heated combs, hot stones to straighten their hair. The hot stone method, involved heating a round stone over a fire and smearing petroleum jelly on their hair. The hot stone was taken out the fire using a cloth and it was run through the hair to straighten it. However, the top layer of the hair was straight, but once you parted the top hair, the hair underneath was still natural. Despite it being a dangerous practice, women continued to do this in pursuit of poker straight hair. A competing narrative is the one where some black women rejected their natural hair because it was considered ugly and dirty in comparison to the long, straight European hair that was considered beautiful and attractive.

1954: George Johnson launched the Johnson products empire with ultra wave hair culture, a “permanent” hair straightener for men that could be applied at home. A women’s chemical straightener followed.

1960s: Angela Davis became an icon for black power with her big Afro, which became a symbol for black power for the Black Panther Movement. It was the era where hair that was once considered “bad” because of its tight curl, was now considered “good” because it was worn “free” from chemical or heat processing restraint. In addition to being symbolic of beauty, the style was also representative of the social rebellion and civil revolution underway. The Afro demonstrated that something new was happening in the United States. It was essentially illustrative of the freeing of the black mind, and those without an Afro were frowned on for remaining in a captive state of mind.

1977: The Jerry Curl exploded on to the black hair scene. It was a perm for black people that lasted long into the 1980s. During this time, chemically treated hair was still in vogue, with women still seeking to change the texture of their hair as voluminous curls or poker-straight hair still reflected Western hairstyle trends.

1990s: Darling Hair was born. This period saw the introduction and rise in popularity of hair extensions, giving women other options. Natural styles and locks were becoming more accepted.

2007: During this year, US Glamour magazine editor Ashley Baker gave a presentation, The dos and don’ts of corporate fashion, to more than 40 lawyers in New York City. The first “don’t” slide depicted a black woman with an Afro, with the caption “say no to the fro”. She then commented: “As for dreadlocks: How truly dreadful!” She went on to add that it was “shocking” that some people still thought it “appropriate” to wear those hairstyles at the office. “No offence,” she sniffed, “but those ‘political’ hairstyles really have to go”. These statements are clear indications of structural racism and offer an indictment on black women’s beauty, and mere physical characteristics.

2009: Despite the negativity, more women wore their hair naturally as they adopted a healthier lifestyle and became aware of the potential damage of using chemical relaxers incorrectly.

Fast forward to the millennium. Today, the people of South Africa are embracing their natural hair. It is safe to say that we have come full circle, with many hairstyles being worn now resembling the hairstyles worn in the 1500s.

But this evolution didn’t come without a revolution.

2014: A research paper, written by Tabora Johnson and Teiahsha Bankhead (Hair It Is: Examining the Experiences of Black Women with Natural Hair), indicated the growing acceptance for natural hairstyles in the workplace.

Hair It Is: Examining the Experiences of Black Women with Natural Hair by CityPress on Scribd

2016: Schoolgirl Zulaikha Patel became a symbol of the fight to legitimise natural black hair in schools after teachers told her that her hair was unruly.

2017: I stand proud today when I see women liberating themselves from social systems that dictate what styles they should wear in order to find acceptance or workplace success. After all, hair is still a statement of personal taste, but women are free to choose what styles to wear without being judged.

At Darling, we cater to all women, regardless of their style preference. For those who prefer a natural look, we have our Bantu locks and Vibration hair extensions. If a woman chooses weaves, Darling’s Nikita and Kerry H cater to you. If braids make you feel beautiful, Darling’s Bright and Bold and One Million Sorbet braids fit the bill. We embrace the diversity of African hair and choices that women make to express themselves.

As a brand that embraces African beauty, women’s empowerment and self-expression, Darling encourages women from all walks of life to express their Hairitage through their hairstyles.

Miriam Makeba, one of the most celebrated South African artists of our time, is perhaps most famous for The Click Song, but we must never forget about her activism. When she testified against the South African government at the United Nations in 1963, she wore her natural hair as she shook the world.

South African women can join the revolution by sharing their most expressive, proudest heritage hairstyles on the Darling Facebook Page.

We live in a world where facts and fiction get blurred
In times of uncertainty you need journalism you can trust. For only R75 per month, you have access to a world of in-depth analyses, investigative journalism, top opinions and a range of features. Journalism strengthens democracy. Invest in the future today.
Subscribe to News24
Related Links
Intolerance, hair, teachers: Here’s how Lesufi plans to ditch racism in schools
Weaving her way to the top
Young SA activist honoured with mural in New York
Next on City Press
Close Up | Trembling to the discordant symphony of lawlessness