The unemployed can contribute but laws and unions block them 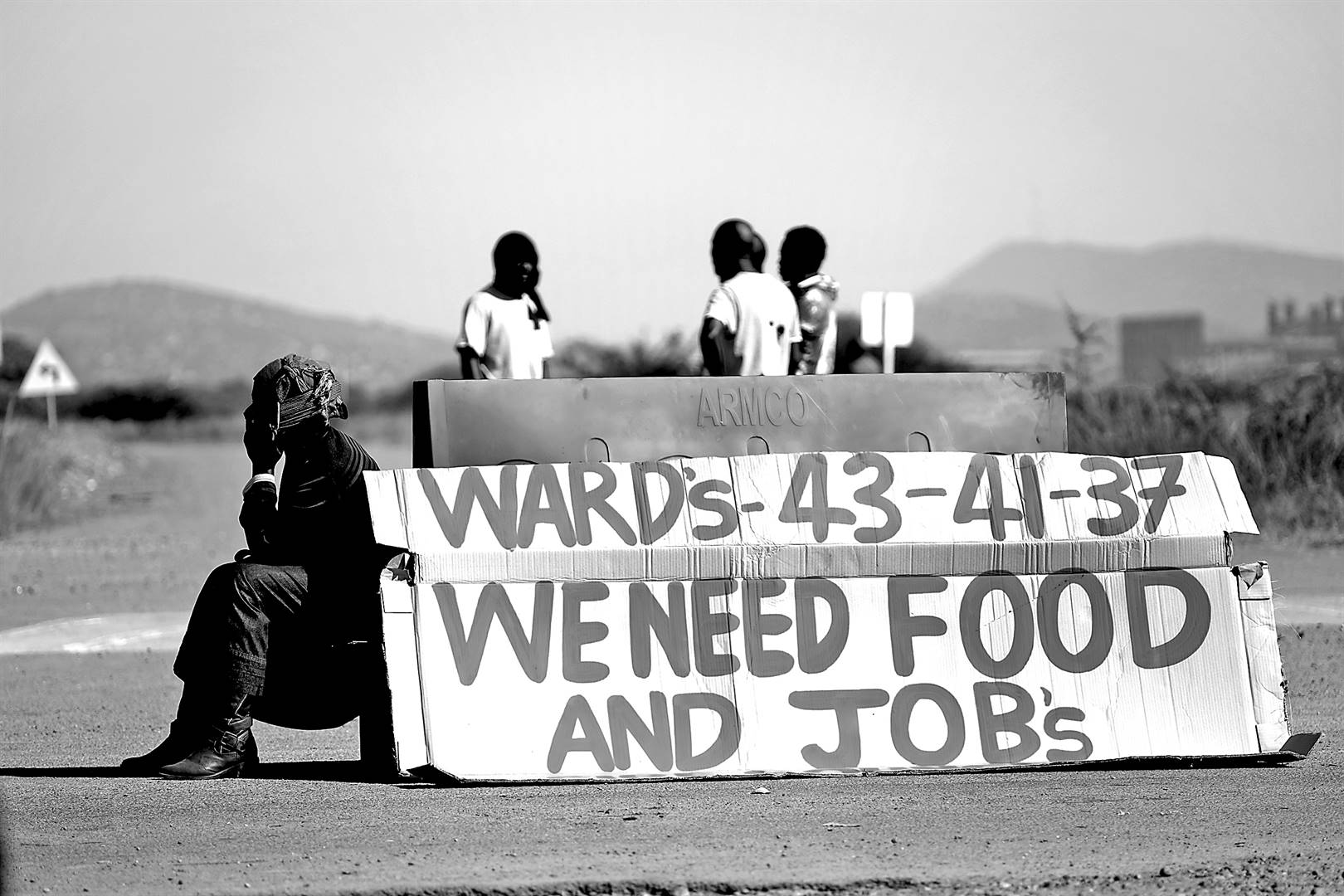 Protesters from the Seraleng mining community in Rustenburg in May. Picture: Getty Images/File

Unemployment was already high before the lockdown. It is now so high that Statistics South Africa does not seem to be able to tell us how many people are unemployed.

They leave out those who have not looked for a job in the last three months. Using such a counting system during the lockdown will not give the correct answer.

Many unemployed people will be left out during the lockdown because there is no sense in trying to look for a job.

Apart from the lockdown there are other reasons for high unemployment. When two elephants fight, they trample the grass and the grass suffers.

The two elephants that are trampling the grass in South Africa are the unions and government and the unemployed are the grass that is suffering.

The unions have never spoken up for the unemployed and the Langeberg Unemployed Forum does not expect them to have the appetite to speak up for us. Our view is that they will never speak for the unemployed because they do not like competition for jobs.

The unions realised that the three million workers who lost their jobs because of the lockdown, had a negative impact on their balance sheet in terms of the monthly subscriptions they lost, which made them angry and decide to go on strike.

The Langeberg Unemployed Forum is not anti-union but it is against government granting special privileges to unions that have negative results for the unemployed. The high cost of hiring and firing laws, minimum wages, and other costs that employers must pay, are what keeps our members out of the job market.

Employers who could afford to pay, for instance, a wage of anything from R1000 to R3000, which would allow an unemployed person to put food on the table for their families, would land employers in the labour court. It does not matter what reason an employer has for offering a job at a low wage. Whether it is out of generosity or being mean, the law treats the employer the same.

Read: Experiences of the unemployed during lockdown

The worst part of such a situation is that the unemployed person has no say in a matter that is so important to them. It cannot be possible for legitimate laws to be passed that have such bad results for the poorest people in the country. Such laws, which take away the rights of the most at-risk people in the country must be against the Bill of Rights.

But the South African Human Rights Commission, the organisation that was given the constitutional job of making sure that the laws passed by Parliament do not tread on the rights of the people, does not seem to take its job seriously.

If one person calls another person a bad name, they act instantly, especially if the name-caller has got money and they can make them pay a big fine. But when the Langeberg Unemployed Forum lodged a detailed complaint against the laws that cause so much grief in the country we were told: “You say that it is Parliament that is responsible for passing these laws that you say are causing unemployment. If that is so, you must take your complaint to Parliament.”

As an organisation that is working for better conditions for the unemployed the Langeberg Unemployed Forum does not accept the answer we received from the Human Rights Commission.

We will go to Parliament, not to complain, but to suggest that Parliament bring the Job Seekers Exemption Certificate into law. This will give the unemployed the right to make their own decisions about their own working lives. And it will not affect the job security of the people who already have jobs.

Read: A Job Seeker’s Exemption Certificate would give power to the unemployed

The government is between a rock and a hard place and there is no way out for them except if they stop ignoring the proposals from the Langeberg Unemployed Forum. The unemployed can make a big contribution towards growth in the economy if the government will just take away the laws that block the jobless and stop them from getting into the job market.

If all 12 million unemployed people had jobs earning a small amount such as R1000 a month, their total pay would be R12 billion every month. And their total pay for a whole year would be R144 billion. Such figures would make a big difference to the country. It would not happen all at once.

An economist tells me that new entrepreneurs, including many from within the ranks of the unemployed, would have to find new ways of employing so many people. They would also have to generate new products and services to sell.

We request government to exempt the unemployed people from the labour laws and this is the only solution that can quickly decrease unemployment. We must be allowed to negotiate our conditions of employment and wage with the potential employer without any interference from the Department of Employment and Labour.

This exemption can be what we call a Job Seekers Exemption Certificate (JSEC) that exempts the unemployed from the all the labour laws that are currently causing unemployment.

The exemption must be for at least two years to give the holder the opportunity to try a few jobs to find what jobs suit them best. The JSEC exempts the unemployed holder and protects the employer from prosecution under the labour laws.

There must be an employment agreement signed by the employer and the employee, which, together with a copy of the JSEC forms their legal protection and sets the rules for their working relationship.

Generous employers understand very well the plight of the unemployed hence we have a sound relationship with them. I want to use this time to thank all employers who never turned their backs on us when we knocked on their doors asking them to employ us, risking their businesses for us, and restoring the dignity of those who lost hope due to unemployment.

Today they can put food on the table for their families. We see positive results from real partnerships, where Langeberg Unemployed Forum guarantees that our members will never cause trouble for their employer.

A JSEC exemption for all, starting with the long term unemployed, will restore the dignity of many thousands, and eventually millions, of unemployed South Africans and their families.

• Xolile Mpini is the CEO of the Langeberg Unemployed Forum, an organisation dedicated to promoting workable solutions to South Africa’s mass unemployment problem, particularly by the granting of exemptions to applicants who wish to forego the protection of laws and regulations that are ostensibly designed to protect them and who choose to make their own decisions about their own working lives.

We live in a world where facts and fiction get blurred
In times of uncertainty you need journalism you can trust. For only R75 per month, you have access to a world of in-depth analyses, investigative journalism, top opinions and a range of features. Journalism strengthens democracy. Invest in the future today.
Subscribe to News24
Related Links
The injustices exposed by Covid-19 require an entirely revised global vision
Digital and tech work offer opportunities for unemployed youth
Unions urge Nxesi to resolve UIF challenges as frustration builds over payment delays
Next on City Press
Dinga Sikwebu | Sisulu’s political inauthenticity is astonishing