The will to preserve institutions of black excellence is alarmingly absent The decolonial discourse began to centre itself on the transformation of institutions. Picture: Archive

The private Afrikaans university recently built in Centurion by Afriforum and its subsidiary labour union, Solidarity, has sparked numerous debates.

Chief among these is the notion of white privilege and the extent to which it will manoeuvre itself in order to ensure that it replicates its cultural patterns and dominance.

While this debate is valid and deserves a level of attention, an important and nuanced discussion around the creation and preservation of black institutions is somehow being skirted in favour of analysing the low-hanging fruit.

The advent of democracy in South Africa has had a profound effect on institutions. Many previously exclusionary institutions have been forced by legislation and an overarching dominant social narrative of democracy to become inclusive.

This inclusivity demands that people cannot be excluded on an arbitrary basis such as race, culture, gender and sexuality.

The #RhodesMustFall movement revived and gave impetus to the decolonial discourse in South Africa, while discussions and debates have always existed around Pan-Africanism, black consciousness and the striping away of colonial symbolism. 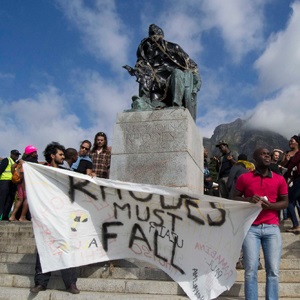 The #MustFall movement managed to centre these discussions in a modern and relevant manner. It partially revived and reminded many who belonged to the previously disenfranchised black racial grouping of the alienation that they experience on a daily basis, which is a by-product of systematic colonial structuring and racism.

READ: The gift and the curse of black exellence

The decolonial discourse began to centre itself on the transformation of institutions such that they fitted into the indigenous context of the African community and were a mirror image of the African lived experience. This in turn sparked ideas around the changing of names, cultural practices and traditions in many institutions that spread across the various sectors.

Questions related to land ownership, language policies and intentionality have been on the minds and lips of many citizens determined to reshape society in a more Afro-centric manner.

One of the most responsive sectors to this change was the arts and culture industry in South Africa, which has increased its pro-black identity offerings exponentially in the past half-decade.

The survival of many colonial institutions in democratic South Africa is not a product of immaculate conception but rather of deliberate and calculated efforts from the beneficiaries of these institutions to keep them alive, active and competitive for future generations. A social compact has been struck by private individuals tethered by cultural and racial associations coupled with their lived experience and gratitude for the role played by those institutions in shaping their lives.

The recently built private university is such an example. While no Afrikaner has benefited from the institution yet, many within the community can resonate with the advantages of having an institution steeped in its culture and ideology.

AfriForum and Solidarity are the mere vehicles behind which numerous individuals and businesses from the Afrikaner community donate money, to ensure that the project’s preservation continues undisturbed. Universities such as Pretoria, Stellenbosch and the Free State, and North-West University’s Potchefstroom campus are living testaments of Afrikaner training and intellectual machinery that has been able to withstand the test of time and provide the community with an added advantage or privilege.

The recent developments, ranging from mergers with historically black universities to the scrapping of Afrikaans language policies, demographic representation policies and neutral institutional culture has, however, diluted these previously antiblack silos, thus the only logical solution is to create a new seat of Afrikanerdom in a private domain partially beyond the reach of unwanted visitors.

In the same vein, the apartheid government created black institutions of higher learning that inadvertently became symbols of resistance, struggle and a fusion of black African culture, such as the universities of Limpopo (Turfloop), Transkei (Unitra, now Walter Sisulu University), Fort Hare, Durban Westville campus (now University of KwaZulu-Natal) and the Western Cape, and Lovedale College and Tecknikon Northern Gauteng.

The reality is that, years later, these and other black institutions have faced major challenges in relation to funding and accreditation of certain academic courses which were formerly flagship programmes.

An area of concern that I would like to address is the importance of black institutions that existed during apartheid which were able to foster and nurture black excellence, and the seeming neglect to which these institutions have been subjected by their direct beneficiaries.

These institutions, despite receiving a mere fraction of the funding in comparison with their white counterparts, were able to produce some of the greatest leaders, thinkers, professionals and businesspeople of the post-apartheid epoch.

One may argue that these historical institutions that were a product of apartheid rule should be abandoned and new institutions bred out of our democracy should be created. Such thinking borders on extreme idealism when you consider the current challenges and state of existing institutions of learning.

This is, and must be, an important part of the process of the deracialisation of the ownership of productive property in our country.
Then president Thabo Mbeki

The reality is that, years later, these and other black institutions have faced major challenges in relation to funding and accreditation of certain academic courses which were formerly flagship programmes. However, some of their reputations have disappeared into the abyss of history.

The initial analysis of this situation would seek to plant the blame squarely on government for not doing enough, and exonerate the thousands of graduates and alumni from bearing any responsibility for the development and maintenance of their alma maters.

The funding of institutions of higher learning is based on various factors, however, the three factors which stand out are government grants, funding earned through research production and donor funding. Historically white institutions have a comparative advantage with regard to donor funding, as most large entities prefer donating their resources in line with the racial and cultural profile of their executives and shareholders.

When the ANC came to power in 1994, it took a deliberate decision to create a black capitalist class with the intention of its evolution into a patriotic bourgeoisie.

Speaking at a Black Management Forum AGM in 1999, then president Thabo Mbeki is quoted as saying the following about the creation of a black capitalist class: “This is, and must be, an important part of the process of the deracialisation of the ownership of productive property in our country.”

READ: Azwifarwi Dick Ralushayi: A humble patriot who committed his life to freedom

In my opinion, productive property stretches beyond the parameters of businesses and sectors that generate immense capital – it also includes institutions that produce knowledge and that have the capacity to transform and affect social patterns in society.

More than two decades later it has become evident that this elite black class has little to no concern with regard to preserving black institutions or the deracialisation of institutions which do not translate into money lining their pockets immediately.

This trend extends beyond institutions of higher learning into community football and sports clubs, religious and youth clubs that are community based, and primary and high schools. The will to preserve institutions of black excellence beyond PR campaigns is alarmingly nonexistent due to the overriding notion that reserves the duty of preservation solely for the government, regardless of its constitutional mandate to serve all citizens equally.

While there are myriad hashtags and social media campaigns run to encourage and galvanise black people into supporting commercial goods, services and business owned and run by their own, this has not translated tangibly into supporting and maintaining black institutions that have contributed to the success of Africans.

In truth, we cannot allow a situation in which such institutions are badly managed or remain stagnant because of total lack of interest from people who have benefited from their existence. A new narrative must be created – a social compact that spurs Africans into action in a bid to preserve the culture and quality of their alma maters.

This action extends beyond merely throwing money at the problem; it requires taking a direct interest in the activities of institutions and utilising the skills or network that an individual possesses in order to ensure that future generations are given an opportunity to excel in a conducive environment.

The convocation of Walter Sisulu University recently underwent a paradigm shift, seeing well-known alumni coming to the fore and eventually translating their plan for the transformation and restructuring of the institution by securing key positions within the university council.

Such initiatives do not need the green light of government, but can be achieved through collective bargaining among beneficiaries of institutions that have the aptitude and consciousness to become an active part of the solution. S

uch actions do not need a universal political banner but, rather, require deep introspection of individuals in terms of their contribution to the growth and nurturing of institutions tasked with the responsibility and of shaping the thoughts, conduct and perceptions of future generations.

The decolonial project cannot merely be conducted through theoretical underpinnings which bear no tangible fruits apart from a couple of name changes here and there, but it must spur black civic duty to institutions that form part of our foundational identity.

The action needed is beyond the capitalist class playing its role as a patriotic bourgeoisie; it involves each individual, regardless of their socioeconomic status, playing a role in preventing degeneration, facilitating progress and initiating the establishment of new centres of black excellence and Afrocentric culture.

It means holding beneficiaries of broad-based BEE contracts in South Africa accountable with regard to their role in the overall deracialisation of the productive centres of society, which stretches beyond profit-driven activities!

JR Sebastian has dedicated his life to social justice

We live in a world where facts and fiction get blurred
In times of uncertainty you need journalism you can trust. For 14 free days, you can have access to a world of in-depth analyses, investigative journalism, top opinions and a range of features. Journalism strengthens democracy. Invest in the future today. Thereafter you will be billed R75 per month. You can cancel anytime and if you cancel within 14 days you won't be billed.
Subscribe to News24
Related Links
Claim your share of R207 million in dividends
What black women want for Valentine’s Day
The corporate plateau of black professionals
Next on City Press
Phumlani S Langa | Believe it or not, using Twitter slogans makes you sound stupid