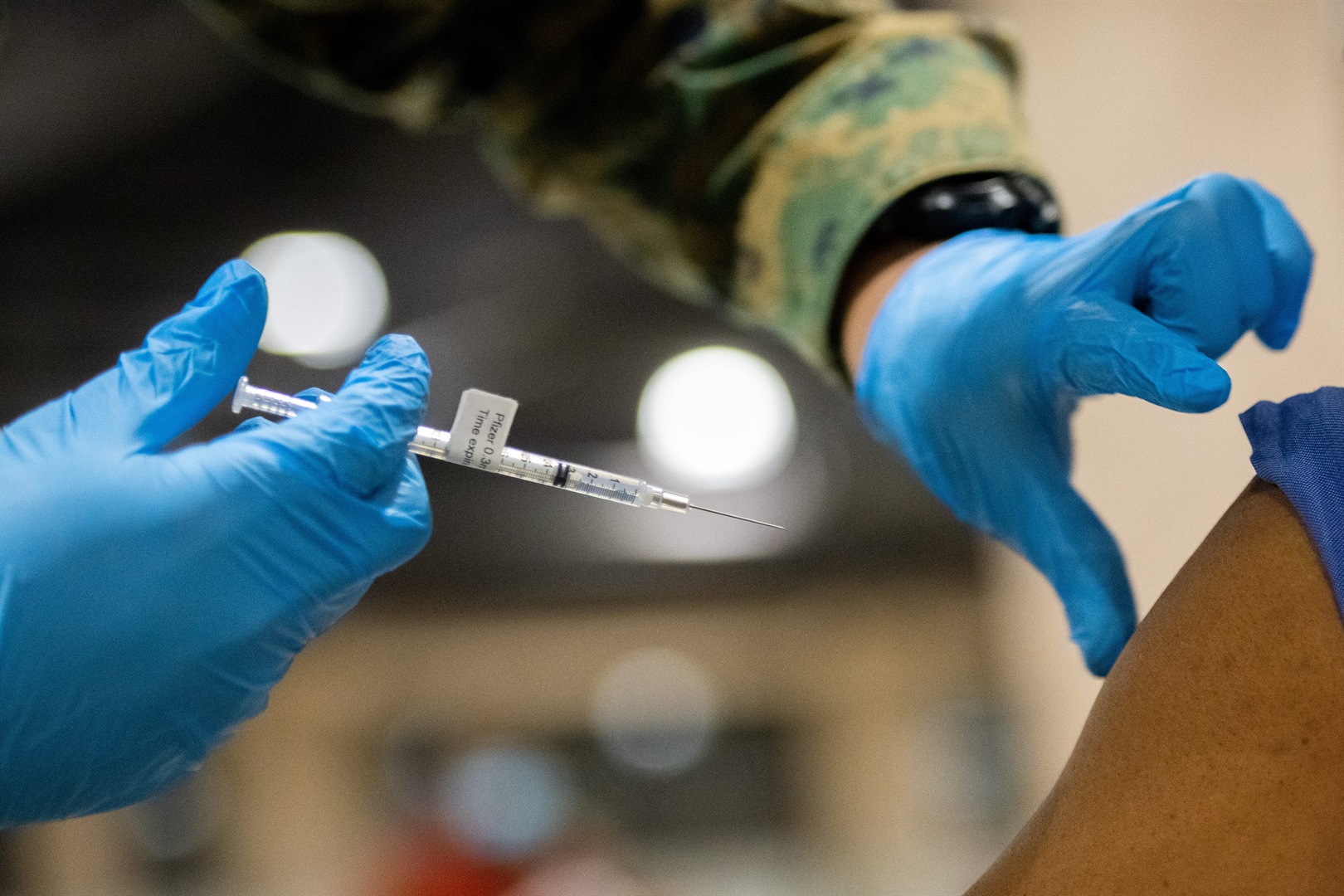 The smallpox outbreak in the 18th century led to the creation of the very first vaccine. Photo: Mark Makela/Getty Images

To understand vaccination, we need to know its history and the reasons for its significance today.

There have been numerous epidemic and pandemic outbreaks throughout history – the black death, numerous plague outbreaks, polio, smallpox and the Spanish flu, which was a global public health disaster in 1918, to name but a few.

The smallpox outbreak in the 18th century led to the creation of the very first vaccine, although, at the time, this method was known as variolation. Variolation is a method of inoculation, the induction of a weakened smallpox bacteria on a healthy individual to help build their immune system against a more potent smallpox variant.

This method was probably practised in Africa, India and China long before the 18th century, although known by a different name at the time, called insufflation.

At this time, variolation could only be afforded by wealthy people, which did not help control the spread of the disease quickly. Those who had smallpox had to be quarantined to limit the hasty spread of the disease. This deliberate infection was for the development of immunity.

Edward Jenner, a British scientist and physician, developed the term ‘vaccination’ – ‘vacca’ is the Latin word for a cow; ‘variolae vaccinae’, which means smallpox of the cow. Jenner’s practice carried the vaccination process throughout Europe and the Americas, and slowly, people became immune from the disease.

The case fatality associated with smallpox variolation was ten times lower than naturally acquired infection. About 2% to 3% of variolated people died from the disease, were a source of another epidemic or suffered from the disease. In 1980, the World Health Assembly declared smallpox eradicated, about 184 years after the first vaccine implementation.

Louis Pasteur’s 1885 rabies vaccine was the next to make an impact on human disease. After the dawn of bacteriology, rapid scientific developments followed through the 1930s, including antitoxins and vaccines against illnesses, such as diphtheria, tetanus, anthrax, cholera, plague, typhoid, tuberculosis, were developed.

READ: The burning question: to vax or not to vax?

Vaccination also assists in preventing the continuous spreading of communicable diseases and helps strengthen the immune systems of individuals. Some people may have severe or life-threatening allergies to vaccine ingredients, although this is very rare. However, immunocompromised patients, such as those with diabetes or undergoing chemotherapy, may need to seek medical advice before taking any vaccination.

Polio can quickly spread from one person to another. A person can get polio through polluted water, and this illness usually affects children under the age of five. If a child under five does not get vaccinated, and contracts the disease, it will paralyse them, leading to permanent disability and even death. Nigeria was the last African country to completely vaccinate the whole population and those in villages that were hard to reach. The country put an end to the spread of polio in 2016, whereas South Africa achieved this in 1996.

In other countries, if a child is not fully vaccinated, they cannot attend school and even preschool. In Australia, the “no jab, no pay” policy was implemented in 2016, allowing the state to withhold the following benefits for parents of children under 20 years who were not immunised: child care benefit, the child care rebate, and a portion of the fortnightly family tax benefit, part A.

These are just some international measures used to encourage individuals to get vaccinated for public health benefits.

Social media has made it possible to share and consume health-related information at a pace never imagined before. It is vital to get information from credible sources to avoid the negative impact of fake news.

Kimiz Dalkir and Rebecca Katz, in their book titled Navigating Fake News, Alternative Facts, and Misinformation in a Post-Truth World, state that people tend to seek information that is compatible with their existing views and values, and they search for deliberate “facts” that support their conclusions, and any news/information that contradicts their beliefs is counted as “false news”.

This biased approach is dangerous and may perpetuate the sharing of fake news and spread misinformation, thus evoking more fear and confusion.

News on social media travels faster and has a wider reach at the touch of a button. It is essential to realise that fake news, incorrect information and intentional spread of false information may occur as well, especially during a pandemic. Misinformation ecosystems are interconnected chains and exist to spread false or misleading reports.

It’s essential to keep in mind that some of the information is generated by humans and robots – that become real in their consequences.

READ: How bots accounts are putting lives in danger during Covid-19

Fake news distorts information to mislead the audience. One should always double-check the credibility of online information and the sources too. We live in a country with low health literacy; hence, it becomes vital that we all play an active role in sharing credible information, correcting misinformation and directing individuals to credible sources.

The Cambridge dictionary defines an anti-vaxxer as someone who disagrees with vaccinating people and is one who spreads and encourages opinions against vaccines. Anti-vaxxers have had different reasons, even from the time of Edward Jenner; objections ranged from religious and political to sanitary reasons. Some of the resistance to vaccination during Jenner’s time was related to financial constraints. Some doctors found variolation to be a lucrative procedure they didn’t want to abandon.

Regarding the recent measles outbreaks in March 2021 in the US, the Centers for Disease Control and Prevention stated, “measles outbreaks generally happen when a traveller brings the virus into the country, and it then spreads among clusters of unvaccinated people, often fostered by “anti-vaxxer” sentiment among some parents”. Moreover, regarding the cost, “a single measles outbreak cost one US county $3.4 million” – this puts pressure on the economy and society.

The World Health Organisation considered vaccine hesitancy one of the top ten risks to global health, even before Covid-19. A study that analysed English Twitter responses shows that Republicans are most likely to refuse vaccines in the US.

These surveys state that individuals were hesitant due to the perceived notion that the Covid-19 vaccines were rushed (37%) or because individuals mistrusted vaccines in general (12%). Covid-19 vaccine hesitancy in the UK resulted from the lack of trust within the healthcare system.

Moreover, on a global scale, vaccine hesitancy was associated with conspiracy theory beliefs, valuing personal freedom, disgust about blood/needles, vaccine ineffectiveness due to virus mutations, perception of being an experimental subject and the fear of side effects, to name but a few.

The value of vaccination

The societal benefits of vaccination include achieving population (herd) immunity and protecting both vaccinated and unvaccinated individuals.

The pandemic has put a strain on the health system’s capacity to respond to increased demand for health services. Vaccination can reduce Covid-19-related healthcare demands on the health system, because vaccinated individuals are expected to experience a milder form of the disease and a reduced need for intensive care in hospitals.

We also need to take cognisance of future health needs resulting from long Covid, and the economic and psychosocial impact of the pandemic. Productivity and economic recovery will be influenced by the health and the movement of people.

Vaccines and side effects

Vaccines do have side effects, and they range from common short-term effects such as pain at the injection site and flu-like symptoms, to rare fatal outcomes, like blood clot complications. Such information must be processed in the context of the probability of these side effects affecting vaccinated individuals.

It is essential to realise that fake news, incorrect information and intentional spread of false information may occur as well, especially during a pandemic. Misinformation ecosystems are interconnected chains and exist to spread false or misleading reports.

Both the benefits and risks of vaccination against Covid-19 should be considered so individuals can make informed decisions. The benefits outweigh the risks, as vaccinated nations show lower hospital admission rates among the vaccinated population than the unvaccinated.

Solidarity is vitally important to combat any disease outbreak. Countries need to work together to facilitate equitable access to vaccines, ensure ease of access to credible health information and respond swiftly to misinformation and fake news.

At Health IQ Consulting, Kabala is a research assistant and Kubheka is co-founder and managing director.

We live in a world where facts and fiction get blurred
In times of uncertainty you need journalism you can trust. For 14 free days, you can have access to a world of in-depth analyses, investigative journalism, top opinions and a range of features. Journalism strengthens democracy. Invest in the future today. Thereafter you will be billed R75 per month. You can cancel anytime and if you cancel within 14 days you won't be billed.
Subscribe to News24
Next on City Press
Inside Labour | Again and again, the poor suffer the most

Listen to our latest podcasts.
Voting Booth
A new report by the Electoral Integrity Project, which looks at the quality of electoral integrity worldwide, has identified South Africa as having the second-highest level of integrity in its elections in Africa. Do you agree with the report?
Please select an option Oops! Something went wrong, please try again later.
No
43% - 46 votes
Yes
27% - 29 votes
We should be first
30% - 32 votes
Previous Results