What’s in City Press Voices: ANC suffers from a delusion of self-righteousness; Make sexism uncool; The war will get very ugly 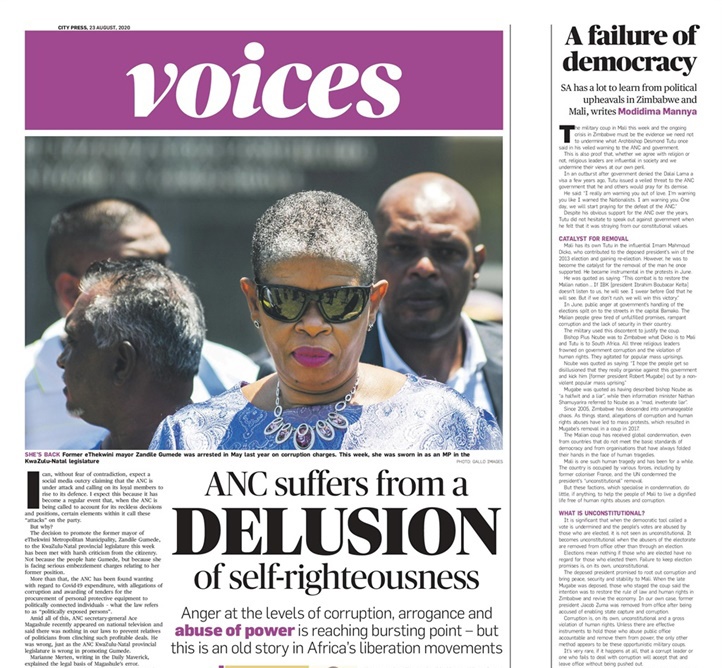 ANC suffers from a delusion of self-righteousness

The ANC should avoid taking people for granted. Its excesses are mobilising people who are tired of being excluded from wealth distribution and are ready to fight for their rights. The party has been warned, writes Chris Maxon.

A failure of democracy

Modidima Mannya writes that government must spare the people the pain of mass protests and opportunism by urgently addressing the concerns of this nation. It must deal decisively with those who undermine our constitutional values.

The war will get very ugly

The good folks at the Umkhonto weSizwe Military Veterans’ Association are not regarded as the best and brightest among us.

After steadfastly supporting Jacob Zuma before, during and after the lost decade, and mostly leaving Cyril Ramaphosa alone, they are now in fighting mode and are targeting the president.

The enablers and beneficiaries of the state capture project have simply turned the copy book upside down, writes Mondli Makhanya.

An orator is gone

Japhet Ncube says he has worked with fantastic writers, guys whose copy went to print the way it came in. S’Busiso Mseleku was one of them. Rest in peace, KaMseleku.

We live in a world where facts and fiction get blurred
In times of uncertainty you need journalism you can trust. For only R75 per month, you have access to a world of in-depth analyses, investigative journalism, top opinions and a range of features. Journalism strengthens democracy. Invest in the future today.
Subscribe to News24
Related Links
Under-fire Ramaphosa backs himself into a political stalemate
MK veterans call out double standards in Veterans’ Association
You were a real raconteur, S’Bu. Rest in peace
Next on City Press
Book Extract | Tackling the dilemmas of aid

Sign-up to our newsletters and get the latest results and info in your inbox.
Voting Booth
President Cyril Ramaphosa has praised outgoing Chief Justice Mogoeng Mogoeng for his outstanding leadership and service. Do you agree?
Please select an option Oops! Something went wrong, please try again later.
He served well.
73% - 59 votes
He was too controversial
27% - 22 votes
Previous Results
The best of 2020
Can you guess who featured in our most popular articles from 2020?