Will the ANC take all the land and say ‘at least it’s in black hands’? 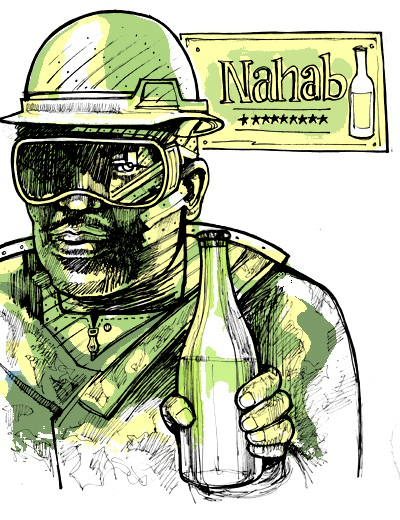 Dionysus, the Greek God of beer must be turning in his grave and indeed for very good reason.

Following the opening of three new beer halls in my wonderful Skomplaas, the boys in blue from the Bheki Cele copshops swooped on them, obviously sent by that corrupt Gumede because his son-in-law runs the most unpopular tavern in the entire province.

So unpopular is his joint that he has to give away free booze to ensure that he does not hear the echo of his own thoughts.

Obviously with the onslaught on my inebriated estate, your truly needed a holiday away from the madness of Mpumalanga and after gathering my Asphuzeni faithfuls, all roads led to Ga-Mashashane to honour an invitation from the Son of Mokoatlo, the Malesela of Bathokoa Ba Kiletjie, who had heard of the good work Asphuzeni were engaged in and requested that we come assist him appease the ancestors with our drinking talents.

So after travelling 300 kilometres into the heart of that Listerine polony-infested province of Malema, the Son of Masakaneng, yours truly found himself in a small haven called Newlands surrounded by the best of SAB’s brown-bottled brew, the beautiful rolling green landscape littered at a distant by soon-to-be expropriated farms.

With the preliminary hospitality inebriants downed and Asphuzeni already announcing their arrival with the sight of empty brown bottles, Son of Mokoatlo said he had read in one of the woke newspapers that apparently one transport deputy minister took her job literally and kept transportation meant for the state.

The deputy minister, Daughter of Chikunga, apparently kept a fleet of German luxury cars she was supposed to return long ago.

Methinks our new Number One could do with transport of his own since he has developed a habit of encouraging people to join him in taking morning walks, presumably to walk off the burgers he is selling them via McDonald’s.

Talking about Son of Ramaposer, Son of Mokoatlo also let it be known that he heard over the wireless that the copshop general wants to privatise the title of general and wants his subordinates to refrain from calling any other person with that title especially the original general, Bheki Cele of stomach-in chest-out fame.

Obviously the copshops seem to have run out of ideas to fight crime.

At the very peak of the session, and with throats well-soaked by the immortal waters of wisdom, Son of Makhafola, the Cafu of Setotolwane, also a native of the area, said he also read in the woke media that apparently the Venda probably Vendor-financing bank VBS, which bailed our beloved former president out of Malema’s #PayBackTheMoney chants, may close shop after the WMC-owned Reserve Bank caught it with some irregularities.

Obviously it became evident that SAB’s finest was taking its toll on the faculties of Son of Makhafola.

That was when the older Son of Mokoatlo, the Johannes, stood up and announced that he read in a newspaper in the big city where he is based that apparently our former presidential handlers Guptas lost a case to have their bank kept open by force.

According to Mokoatlo, who consumes the holy brew like a dry sponge, the former money minister, Gigaba, said the multimillion-rand Gupta breakfasts did not have nice menus and were inappropriate.

With the number of empty bottles increasing along with the need for superior logic yours truly, as expected, led by example.

First I commanded my faithfuls that Asphuzeni, as a respectable stokvel, had an obligation to invite potential members for such progressive sessions that address important matters of liquidity.

Obviously top of that list was Bathabile Dlamini, who will first have to explain why during her tenure she rejected our request for beer grants.

Second would be Dudu Myeni who, according to the wireless, is apparently also talented in dealing with fermented grapes as an alternative to appearing before Parliament.

While I was dishing out my superior logic like the Son of Malema educating ANC MPs, it dawned upon me that there was a great risk that NgwanaMokoatlo Seripa and many other pensioners might not get their pension grants from the government of our Billionaire Buffalo soldier of a president.

According to woke media all 17 million beneficiaries will get paid, but I doubt that version of facts.

While deep in thought and nearing the bottom of yet another of many bottles, yours truly realised that with the Ramaposer allegedly bringing back the land, his party might, like with the BEE fluke that made him buy expensive cows, take it all for themselves and say at least it’s in black hands.

With the depressing possible reality and the resilient search for the solutions of Msanzi at the bottom of SAB’s finest coming to a pause once again, Son of Mokoatlo, the great Bra Phanda, bid us farewell with a few cases of colourless Russian liquids so that we headed to the beautiful mountains of Mashishing with everything but dry throats for our troubles.

We live in a world where facts and fiction get blurred
In times of uncertainty you need journalism you can trust. For only R75 per month, you have access to a world of in-depth analyses, investigative journalism, top opinions and a range of features. Journalism strengthens democracy. Invest in the future today.
Subscribe to News24
Related Links
3 weeks in and no drama. Could Msanzi be missing Jacob of Nkandla?
Gigaba, remember Ramaposer’s words on SAB loyalists, GDP supporters
Next on City Press
Mining in Mabola: The slow violence of environmental degradation