In the midst of high divorce statistics globally and couples that have been together for years, breaking up, Michelle and Barak Obama have remained #relationshipgoals for a while now. However, Michelle Obama says it’s not as easy as people would like to believe.

Speaking at the 25th Anniversary Essence Festival 2019 in Louisiana, United States, Michelle Obama told host Gayle King, that her and Barack had to go through marriage counselling at one point.

Which is why the Becoming author insisted that before considering marrying someone, we need to make sure they’re our equals. “Equality is not just measured in terms of the wallet. Equality in terms of the value that they carry. Honesty is the beginning, middle and the end. I wouldn’t want to be bothered with someone I couldn’t trust on a day-to-day basis,” Obama said.

“It’s not just about how much money they make or title. Someone could have the right salary, but the wrong heart.”

To illustrate her point, the former first lady likened a marriage to sports:

“My husband is my teammate. If we are going to win this game together, he has to be strong and he has to be OK with me being strong. I do not want a weak player on my team, nor does he. And ladies and gentlemen, that’s why it’s so important to marry somebody that you respect. It’s important to marry somebody who is your equal, and to marry and be with somebody who wants you to win as much as you want them to win.”

In conclusion, the mother-of-two gave some advice to the young people in the audience:

Related Links
Michelle Obama is a surprise textbook example of how women thrive and grow through adulthood
Celebrating Michelle Obama's 55th birthday with 10 of her most memorable style moments
"Free to do whatever" - Michelle Obama wows the internet with her iridescent Balenciaga thigh...
Share
Next on Drum
Is your mother unknowingly spreading fake coronavirus news on WhatsApp? Here’s how to help her stop 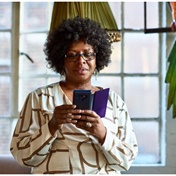