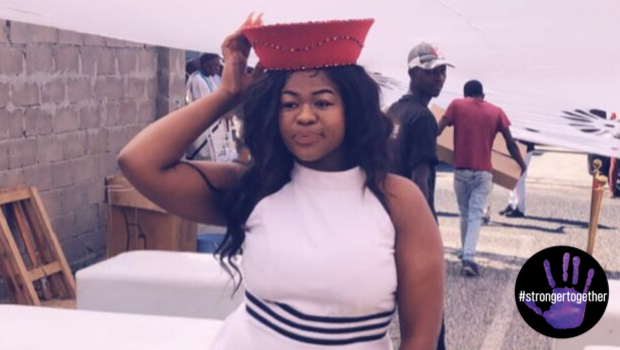 Hlumela is seen by her friends as a happy, bubbly person but, she insists, even the bubbliest of people have stories to tell; a pain to share with others. She shared hers with us.

Hlumela (23) immediately tears up as she recalls the first time she was a victim of sexual assault, in 2015.

“My friends and I'd gone out for the night," she says. "On our way back we separated to go to our various homes. I took a taxi at the taxi rank in Cape Town. These taxis are called 12 Down because when it’s late at night, they do door-to-door deliveries.

“I was the last one in the taxi with the driver and his friend or sidekick. I noticed they took a different route and started to panic – and unfortunately I was panicking for the right reasons. The driver’s friend started smoking tik and then commanded me to take off my shoes. I thought I was being robbed, because they started taking my belongings. I remember I had two phones on me.

“After I'd taken off my shoes he ripped off my dress and started to rape me. I remember feeling scared, in pain and confused. It didn’t last long but it felt like forever. When he was finished with me, the driver took over and raped me too.”

After they were done with her they threw Hlumela out of the moving taxi in Mitchell’s Plain, near a police station.

Once she'd managed to find her way home she immediately told her mother and went to a clinic for a rape kit. “They gave me these ARVs I was to take for 21 days. The rapists hadn't left me with any diseases, but I don’t consider that a silver lining – I wasn’t supposed to be violated like that,” she sobs. She reported the case to the police, "but it never got anywhere”.

Two years later, while still trying to heal from that traumatic experience, Hlumela was raped again – this time by a man she considered a friend, and his friend. “I used to go out with him all the time. I never felt unsafe around him. This time we'd gone out for lunch at the Cape Town Fish Market. After our meal he suggested we go chill at his friend’s place, so I went, not suspecting anything.”

When they got to the friend’s place, Hlumela remembers, she had just two glasses of white wine. “I blacked out and all I could remember was having those two glasses. It didn’t make sense. But I felt that something was wrong, that something had happened to my body.”

When she confronted her friend he became defensive and told her, “You should’ve told me you wanted to sleep with both my friend and I.” But that didn’t make sense to her because she’d never looked at her "friend" like that. “I didn’t understand why he even thought I'd want to sleep with him because we were just friends, nothing more,” she says, puzzled.

Hlumela went home and told her mother. Once again she went to the clinic and her memories of the first incident came rushing back, sending her into a state of depression and suicidal thoughts. “I turned to alcohol and weed. I just didn’t want to be alive. But I decided to turn my life around and use my traumas to inspire other women to speak up.”

Hlumela says after seeing many women telling their stories and exposing their abusers on social media, she's even more determined to tell her story and inspire more women to break the silence.