Everything you need to know about Showmax’s sizzling new show, Blood Psalms 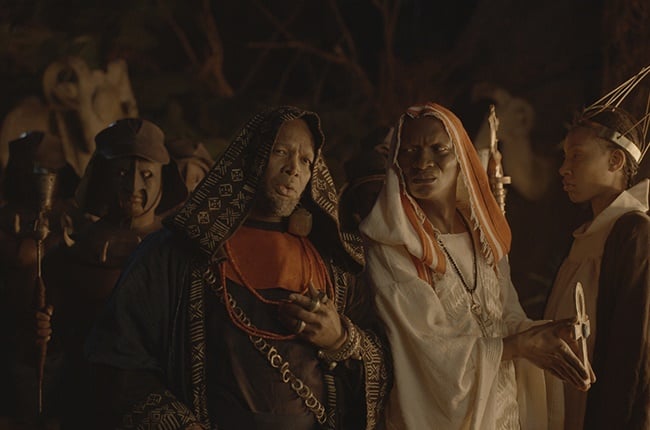 A still from the series Blood Psalms.
Photo: MultiChoice

It’s a question that took the world by storm when Black Panther became a box office hit: What if African countries had never been conquered and colonized? Now, local filmmakers will give viewers a glimpse of that reality in a brand-new show.

Set 11 000 years ago, Blood Psalms tells the story of a fierce teenage African queen, Zazi, who battles a world-ending prophecy to navigate her people through complexities, politics, and endless wars. Award-winning creative duo Layla Swart and Jahmil X.T Qubeka are the brains behind the series, which started filming in April.

“Blood Psalms is an epic that creates and proposes a world of fantasy and high adventure rooted in African mythology and the preservation of the African identity,” Layla says. “The goal, for us, is to ensure the golden thread of Africa’s stunning history shines. The story not only entertains, but also contributes to the preservation of African culture and languages as authentically told by Africans, to be enjoyed by the world,” she adds.

The 11-part series boasts a cast full of stars including Vusi Thanda, Warren Masemola, Zikhona Sodlaka and Sello Maake Ka Ncube. Layla says every actor they selected “brings their unique ability to authentically translate this magical epic onto the screen”. Although the show is targeted at all Africans, it is proudly South African and will be available to stream from Showmax in 2021.

Here’s what you need to know.

Produced by Yellowbone Entertainment in partnership with the Eastern Cape Development Corporation, Layla says locations were scouted based on the vision for the show. “We have shot at Hole in the Wall in Gwadana, in Graaf Reinet, and we are also shooting at a cave site in the North West province and in Bez Valley and in Modderfontein reserve Gauteng at our studio location.”

You’d be wrong for thinking you’ll see African royalty in loin cloth and spears. The costumes on Blood Psalms are designed by award-winning designer Pierre Vienings, who after extensive research, fused various African styles. “We wanted to explore a vast canvas of different cultures and steer clear of simply opting for the loincloth and spear aesthetic. These are thriving kingdoms, with intricate styles.”

Production designer Chantel Carter worked very closely with Jahmil to bring the world to life. “We have many sets, multiple locations in multiple provinces. With vast locations, much inspiration was drawn from ancient African mythology,” Layla says. “Many months were spent on this research and we intend to portray a vision of ancient Africa that is fantastical but infused with genuine information and legend.”

“We are using multiple African languages because we are making this piece of work as a testament to the authenticity that is possible when content is made by Africans for Africans first and foremost,” she says. “There is a responsibility to preserve languages and heritage, and therefore something set 11 000 years ago in Africa mustn't be depicted in English.”

We live in a world where facts and fiction get blurred
In times of uncertainty you need journalism you can trust. For 14 free days, you can have access to a world of in-depth analyses, investigative journalism, top opinions and a range of features. Journalism strengthens democracy. Invest in the future today. Thereafter you will be billed R75 per month. You can cancel anytime and if you cancel within 14 days you won't be billed.
Subscribe to News24
Related Links
Three actors who are joining the cast of Imbewu: The Seed
4 scenes of The River’s Ntsizwa we’ll never forget – and Meshack Mavuso on his departure from the...
Amamkele Qamata shot to fame in Mzansi Magic’s Gomora – now her new Netflix series is set to take...
Next on Drum
‘There are always two sides to a story’ - Mamkhize on abuse allegations made by Sithelo Shozi about her son Andile