Rising Star Dimpho More on her way to top 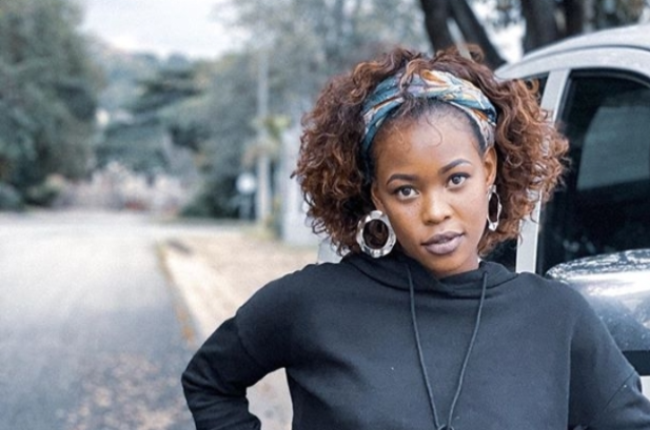 It's a busy storyline.

After vanishing from Hillside in 2017, the role of Nozi played by Dimpho More (26) returns to 7de Laan under the pretense of living a high-flying life as a model and influencer.

With no money or place to stay, Nozi ends up squatting at the Heights that’s under renovation due to a recent bombing, and out of boredom, she lands on a dating App that pairs Blessees with Blessers where she meets Gcobani Mthathi played by Tony Kgoroge.

Unfortunately, her blesser turned out to be her newly made friend’s father, was livid when she found out, demanding they end things.

The blesser ends things and leaves town. Shunned by her friend and out on the street, Nozi confesses the truth about her circumstances to an old friend and flame Dr. Fikani Chauke played by Nicholas Nkuna, who takes her in and gives her a job at his juice bar at the gym.

But he gives her a deadline to find her own place and get her life together with serious thought on her career and relationships around town. She is now working towards earning the trust of the Hillside residents and making a better life for herself.

Talented and vibrant actress Dimpho also plays Phindile on BET Drama Series Isono: The Sin alongside Nthanti Moshesh which has been a dream come true.

“Being paired up with acting giants in the early stages of my acting career has been so humbling," she says.

"I have learned so much from both Tony and Nthati,” she says. “It is sometimes hard to believe that the people I grew up watching are now my colleagues. They are lovely, warm, and open too - we have the most hilarious and important conversations.”

She had always loved the spotlight and dreamt of being an actress or a singer one day.

But her acting career began when she made the decision to drop out of her second-year studies in marketing management.

“I was unhappy. So I had ‘the talk’ with my parents and found myself a reasonable drama institution,” she says. Dimpho studied Performance Arts and Theatre Making Skills at The Market Theatre Laboratory.

She made her professional debut on stage at The Market Theatre in 2016 under the direction of Sibusiso Mamba in a play titled ‘Six Characters in Search of an Author’.

She has since continued to work in theatre under the direction of James Ngcobo; Lesedi Job and MoMo Matsunyane to name a few.

“I did a Shakespearean piece by Emilia. He asked me to leave the room and barge in with the first line of my monologue. I was 22 years old then and that audition gave me a fire that I kept until this day,” she says.

In 2017, she landed her first big television role as Nozi on 7de Laan. This role helped set the tone for the rest of her career and soon after, she went on to star on Rhythm City as CC. Later, she played the role of Nandi in the short film Obsession and Lihle on the very popular YouTube series titled ‘Love The Web Series’.

Growing up in Nelspruit, Mpumalanga, Dimpho describes herself as “very energetic, performative, curious, and a little bit tomboyish”.

“I loved to do physical things, singing, dancing, and climbing trees. Always curious about the world and my favourite word was apparently, why?” she giggles.

She grew up part of a large, blended, loving family of six siblings in total. “I would sing and dance for my family all the time and they would humour me more so when guests arrived,” she says.

“I went to an Afrikaans primary and became a part of a rich history of netball, Eistedfodd (dramatised poetry) and choir in my later primary school years.”

After some time, Dimpho dropped netball in high school and continued to sing in the choir  and in her senior years, she was the lead soloist of both the ‘Altos’ and the senior choir at large. “I then moved to Cape Town for my first year and attended school at Varsity College; moved to Johannesburg the year after and studied marketing management at the IMM until I made the decision to pursue my dreams,” she says.

When she started acting, Dimpho had high expectations and thought it would be flashing lights and she would get roles back to back. “I must say, I expected to be much easier considering that I had training experience. I thought I would just be working non-stop.”

But as history has proven, the life of an actor in South Africa is not easy and jobs are few and far between. “But this has taught me to be patient with everything I do,” she says.

“Patient with myself and constantly reminding myself of my worth and purpose. Patient with the industry and all its politics, patient when being on set or in production and trust that hard work and discipline will always be rewarded,” she says.

Dimpho looks up to American acting veteran Meryl Streep. “I call this woman my acting godmother; she taught me the magic of what one’s eyes and mannerisms can give to a character,” she says. “In the future, I would love to do more film work; play a character with an accent and a villainous omega at that.”

But had she not decided on which career path to follow a long time ago, Dimpho believes she might have been a singer. “I thought I was going to be a singer; Beyoncé was a huge influence and inspiration. But look at me now,” she says.

"My long-term goal is to empower young, black women who aspire to be in the industry I work in. As a director; as a producer and an acting facilitator, I want to use my experiences and knowledge to help the ones who come after me know better and better equip them for what they are yet to experience,” she says.

We live in a world where facts and fiction get blurred
In times of uncertainty you need journalism you can trust. For 14 free days, you can have access to a world of in-depth analyses, investigative journalism, top opinions and a range of features. Journalism strengthens democracy. Invest in the future today. Thereafter you will be billed R75 per month. You can cancel anytime and if you cancel within 14 days you won't be billed.
Subscribe to News24
Related Links
Sivenathi Mabuya on playing Xolile Langa in Scandal! – ‘It has been a very beautiful journey’
Dudu Ngcobo on starting her acting career in her late 40s
Vula Vala actor Khanyisani Kheswa opens up about how rejections almost made him give up on his dream
Next on Drum
'I cried for four days' - Shannon Esra opens up about season two of Lioness