Rising star Zanele Potelwa on 5FM, Selimathunzi and going after what you want 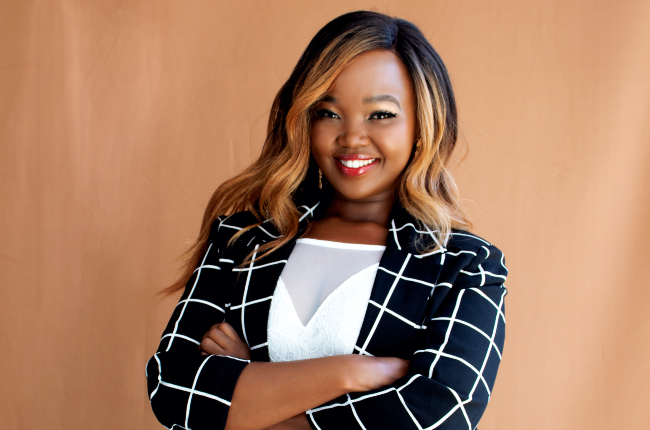 There’s a fresh new face dominating at the SABC and she is making waves in both radio and television at the public broadcaster.

Zanele Potelwa at 26-years-old is the new voice on popular youth station 5FM and has also just become a presenter on the popular lifestyle show ‘Selimathunzi’.

The show was formerly hosted by stars such as media personality Zizo Beda and former The River actor, Lunga Shabalala.

DRUM spoke to Zanele about what it takes to make dreams come true.

Read more | Karabo Maseko on his rise to fame: "I had to grind for myself and go to auditions"

Raised in East London, Potelwa grew up in a big and tight-knit family.

Her father is a medical professional and she initially decided she also wanted to work in health sciences.

“Growing up, I had a strong belief that I wanted to become a doctor because I always wanted to help people and I was convinced that it was what I needed to do but the universe had other plans," she says.

"All through school I was performing well and involved in co-curricular activities such as debating and public speaking and even though I did not know it then, these moments were preparing me for my current career path."

With siblings and a father in corporate, Potelwa shares how it took time for her parents to come around to her ultimate career choice.

"I was well on my way to obtaining a BComm degree when the radio bug bit me in second year and I decided to join TUKS radio.

“My mother was the first one to accept that this what I wanted to do and loved but it took some time for my father to come around,” she recalls.

“It went from them questioning whether this is a real career path to them watching and listening to me on TV and radio and having heart-warming conversations of their favourite moments of it.

“I am still studying and in my final year but the support from my family for me taking this path is all the affirmation I will need,” she says.

A star in the making

Zanele has cemented herself as one of the freshest new faces in the local entertainment space.

She worked hard to get her big break and she shares that although things are aligning for her in the industry, it wasn't an overnight thing.

Zanele pursued her passion for radio by enrolling in one of 5FM’s five-day mentorships where she made an impression on the management team at the station. "I went there for the mentorship programme and I knew that I had to come back once the 5 days were over.

"I was called back and asked to come in to help out where possible. I sacrificed certain holidays and I would not go home to the Eastern Cape just so that I can stay in JHB and work at the station," she recalls.

"From there on, every single chance I got to work with 5FM, I grabbed it with both hands."

From working in the background at the station, to working for a rival broadcaster, Potelwa found her way back to 5FM and has now stepped out of the background. She currently on the station’s popular weekday breakfast show ‘The Roger Goode Show’ and hosts the popular 10am- 2pm slot on Sundays.

Potelwa will now be featuring on Selimathunzi, a transition from radio to TV that didn't come without challenges.

"It was difficult at first but I have adjusted as I have been doing TV for over a year now. Me being on TV started when one of my friends asked me: why don’t I try TV presenting?

"I took the plunge, auditioned and it went terrible. But that did not dismay me – the second one was with Mzansi Insider and I went a little bit more prepared and came as runner-up and that’s when I realized that there’s something there.

"I always consider myself very fortunate is that I went from practicing on YouTube to now being a presenter on the biggest channels on TV and in South Africa.

"It’s surreal that I am on both 5fm and Selimathunzi, shows that I adored growing up. I watched and listened to them with my siblings growing up, and now they will be able to watch and listen to me - their very own sister.

"I am a firm believer that God doesn’t give you what you are not ready for – so each audition that didn’t turn out as well, those inserts that didn’t grow into anything big were in preparation for the time I find myself in now," she says.

"I strongly believe that it's important to continue to work at whatever one wants or desires because greatness awaits them because at the end of the day, we were all put on this earth for a reason".

“I do not take it for granted that I get to wake up each day and broadcast to our nation and that every Tuesday night, I get to be one of the faces that graces the TV screens of millions of South Africans, on the biggest tv platform in the southern hemisphere,” Zanele says.

We live in a world where facts and fiction get blurred
In times of uncertainty you need journalism you can trust. For 14 free days, you can have access to a world of in-depth analyses, investigative journalism, top opinions and a range of features. Journalism strengthens democracy. Invest in the future today. Thereafter you will be billed R75 per month. You can cancel anytime and if you cancel within 14 days you won't be billed.
Subscribe to News24
Related Links
Rising star | Getting to know Durban singer Azana
Rising star | DJ Christy on overcoming life obstacles and working towards her dream
Rising Star Dimpho More on her way to top
Next on Drum
It's only the first episode and already so much tea has been spilt on Real Housewives of Durban