Tshepo Senatle on his big break as Koloi on Skeem Saam Tshepo Joseph Senatle on his character on Skeem Saam
Supplied

It's a storyline that a lot of people can relate to. Moving to the City of Gold in search of fame and fortune, and then getting robbed and losing everything.

This is the story that Tshepo Senatle tells through his character Koloi Shivambu on the popular telenovela, Skeem Saam on SABC 1.

Being on Skeem Saam is his big break, so the character is near and dear to his heart.

He tells us that he relates to a quarter of the current storyline. In it, Koloi packed his bags and set off to the City of Gold after getting his first-ever interview as a jewellery designer.

Things took an unexpected turn when he trusts the wrong people who rob him while in a taxi to his interview. They leave him half naked.

The star tells Drum that he has had his fair share of being mugged in Johannesburg, but not to the extent that he was left half naked.

"I got mugged a couple of times until I decided to buy a car because, for my entire life, I preferred walking. The first time I was walking from somewhere in the Joburg CBD to get a taxi at Bree, it was around 8 or past 9pm and before I even got to the taxi rank, I didn't have my wallet, phone, cash, and it wasn't even violent kind of a thing.

"The guy was just walking behind me and all of a sudden he started asking for my belongings. It was like he was having a normal conversation. He said he is the Joburg king and 'this is what we do in Joburg. it's either you give me these things or I'll take them myself.' I didn't have the energy to fight. I gave them to him.

"The second time was during the day and I had my earphones on listening to music. The phone was in my front pocket, and as I was walking across this lot of people. In my mind I was confident that there was no way someone would snatch my phone without me noticing because it is at the front, unfortunately, I bumped into this other guy the same way Koloi did with the dustbin man and after I crossed the street, I didn't have my phone anymore."

He says after the third time, it became too much for him and had to prioritize his safety in the city by getting a car.

"The third time was around 6pm. We wrapped up very late at work and now I had to go back home. I knew that day that there was a high possibility of me getting mugged because it happened before. I had everything in my backpack but someone confronted me, pointed at me with a sharp object and demanded to search my pockets."

Tshepo gives such a stellar performance in this storyline that he's become the talk of the town. He says he is very much aware of the whirlwind Koloi cause on social media.

"I am honestly overwhelmed by the reactions. I don't know what to say because it is such a humbling gesture. I am so happy that people are receiving Koloi well and that they find how I play him interesting and relatable." 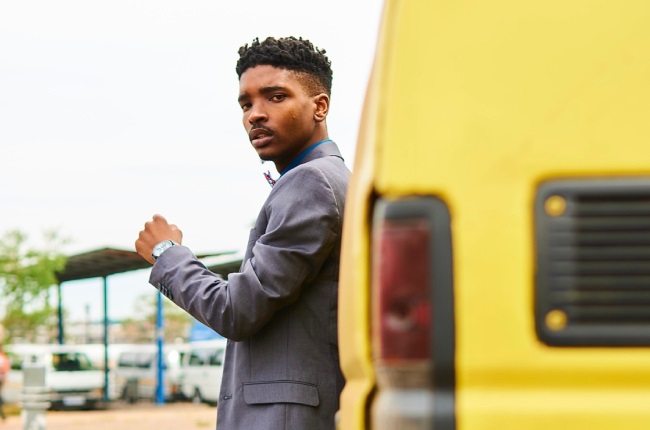 Tshepo was born in the North West province but spent most of his teenage years in the Northern Cape after his family relocated.

"So I am a product of South Africa actually," he says, laughing.

He's light-hearted and cheerful as his character on Skeem Saam. When he talks about his age, he chuckles, "I was born in 1996 and I forgot my age."

Tshepo tells us that he had dreams of being an economist after completing his matric. He says his plan was to enroll for the qualification at North West University.

"Unfortunately, my APS didn't allow me. I ended up doing something around communications but I never went to school because the bursary that I applied for did not respond. My parent's couldn't afford the tuition fees, so I just slept on that.

"I tried an FET business college in Kimberly and I dropped out like in a month because it was way too far from my home like plus or minus 65 kilometres. So the taxifare was about R100 so it was too much."

He says that is when he decided to pack and go to Johannesburg to seek for greener pastures.

"I never had an opportunity to find a school or something. My eyes were set on finding a job and making my life normal for paying bills. So I went around the corners of Joburg looking for a job."

He got a job in a workshop. Then one day he decided to try his luck in the entertainment industry.

"I dodged work to go and audition. It was on a Saturday."

He says acting was always at the back of his mind. He participated in plays and performances in primary school.

"When I came to Johannesburg I had done an audition for a show in a local radio station. I didn't get the job and the audition led me to taking my craft serious because I knew that it was what I wanted from a young age but couldn't pursue it."

He became the pride and joy of the Bapedi tribe as they grew very fond of him as his character developed on the telenovela. Tshepo "Ke Motswana", he says. But he was familiar with Sepedi.

"That is the golden question that I always get," he laughs.

"We watched Skeem Saam from episode one at home and the language was not foreign when I came to Joburg. Sepedi was not strange to me, most of my friends are Pedi even at work I had more Pedi speaking people than any other tribe. I felt like it was worth learning.

"I felt very much draw to the language before I could even use it to the show. My interest in it comes from church as well because at ZCC, you have Sepedi as the main language. I felt like I had to learn so that I can fit in well in church, at work with my colleagues and friends."

He says it was a walk in the park when he got the role because he already knew the language.

"And the more I visit Bapedi in Limpopo, the more they deny that I am Tswana. They say I am not of any culture outside."

There are challenges too.

"My biggest challenge was when Koloi lost his mother and as an actor I still have my parents. I did not know how it feels to lose someone who gave birth to you, let alone how to react to it. It was so difficult so much that I had to attend funerals of my close friends and relatives to see while mourning with them, so that I am able to deliver that storyline. It was scary."

He says his heart is full at the moment and have no plans on doing other projects.

"I love Koloi and his growth. I am still enjoying his developments."