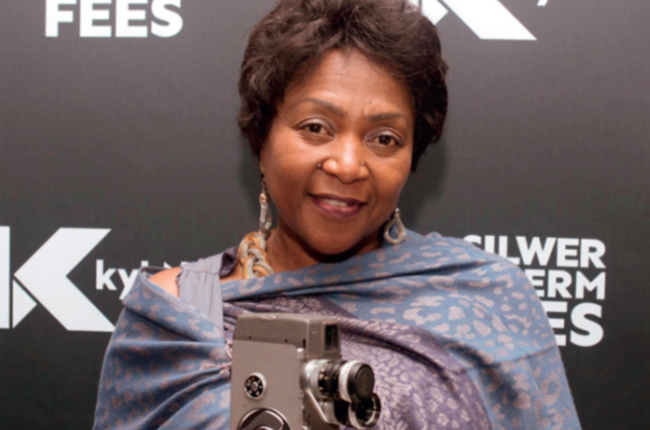 This story first appeared in the print version of Drum.

Clementine Mosimane (55) has had a busy year. She’s was the lead in the movie Poppie Nongena earlier this year and was also in BET Africa’s series, Black Tax.

She’s been a regular on TV screens since the ’90s but she’s got over 30 years’ experience and shows no signs of slowing down.

She’s worked on almost all kinds of TV shows. From children’s shows to comedies and soapies, nothing is off limits. The multilingual Clementine can tackle Sotho, Tswana, English, Afrikaans and isiXhosa scripts. She tells Drum that Poppie Nongena, where she speaks isiXhosa and Afrikaans fluently, was one for the books in her career.

“This character demanded deep emotion from me,” Clementine says.

She says even after all the years on many different sets, a character will demand something different from you.

“I always ask God to grant me the favour to play a character accordingly. Effort, commitment and emotion in a character will always be demanded from you,” she adds. In one scene, Poppie’s grandchild gets killed while on her back during a riot. “On the last day, I just could not stop crying. Even when they said, ‘Cut’, I didn’t stop crying,” she says.

At the 2019 kykNET Silwerskerm Film Festival she won the best actress award for her stellar performance in the film.

In Black Tax she speaks isiZulu effortlessly too. But this isn’t new to viewers who’ve heard her in Isibaya, where she plays Gloria.

“My grandmother was Afrikaans-speaking, my grandfather is Pedi, my father is Tswana and I guess growing up in Soweto was an advantage because of different languages spoken there – like Zulu, Xhosa and all the others,” she explains.

Taking pride in languages has paid off for her, that’s why she can never be labelled a one-trick pony. “When I started in the industry, it was the start of television and black language dramas on TV2. At the time we didn’t have people to look up to. It was all about learning as much as possible,” she adds. Over the years this enabled her to juggle different roles seamlessly.

“I open my spirit and myself to different situations, that keeps me going. I don’t limit myself because when you do, you are going to get limited in your capabilities,” she explains.

Her acting résumé is so long that sometimes she forgets some of it. She’s been in Soul City, The Wild, Yizo Yizo, Intersexions, Rhythm City and Gold Diggers, the list is endless. She is currently in SABC2’s new telenovela, Lithapo, where she plays mom to Nolo – played by Khojane Morai, a 22-year-old industry newbie.

Clementine says she could never take the credit for how everything has turned out for her.

“It is the grace of God. When you are trusting God and the given talent, you just embrace what you do and love what you do all the time. Sometimes I also look back and ask myself, ‘What happened to so and so?’

“There are those people we started with who have passed on, but there are those who are still alive. Somehow, they have faded away. I thank God for keeping me and going before me, being a light to my path wherever.”

With all of these years in the industry, she never goes into an audition with the expectation that she’ll get the role. In fact, one of the challenges she’s had overcome is getting a “no” from auditioning.

“Getting a ‘no’ and not knowing why is hard at times. But maybe you simply don’t have what they’re looking for and that is okay. It could be easy for you to give up but always remember, God has given you the talent, hold on to that.”

This kind of thinking has been what’s helped her in her journey too. Clementine is a spiritual person who puts God first in all that she does. She was born-again in 1984 and says her journey with God has been a beautiful one.

“I have learnt that when God steers your life into a certain direction, even if you resist it, you will always fall back into it,” she adds. She dabbled as a presenter for a Christian show Aganang on Dumisa TV and this is where viewers got to see her reveal her true self.

“On Lithapo, I always tell my onscreen son [Khojane Morai] that I might have experience but he should not be intimidated by me. The first time I saw him, I told him, ‘Give your best and let us pray together, on set’,” Clementine says.

She often gets asked how she does it and her answer is: “Have character as a person and let your character be good. Be a good listener, allow yourself to receive criticism, take it. It is coming from a good place.

“I also critique myself in my work.

"I learn new things every time. Remain humble in all that you do. Without a character and if your attitude stinks, who will want to work with you?” she asks.

What still warms her heart in public is when people who watch her on TV embrace her.

“It doesn’t take anything away from you to stop for a picture and chit-chat. Some just want a hug. We are where we are because of people who appreciate us. Excitement makes them lose it, which is harmless. Smile, embrace and move on.”

We live in a world where facts and fiction get blurred
In times of uncertainty you need journalism you can trust. For 14 free days, you can have access to a world of in-depth analyses, investigative journalism, top opinions and a range of features. Journalism strengthens democracy. Invest in the future today. Thereafter you will be billed R75 per month. You can cancel anytime and if you cancel within 14 days you won't be billed.
Subscribe to News24
Related Links
Rising star | Nondumiso Jozana ready to turn up the heat in Durban Gen
RISING STAR | Actress Sikelelwa Vuyeleni on her new role on Mzansi Magic’s new drama Vula Vala
Sannah Mchunu on conquering her challenges and her award-winning role as Zodwa on Gomora
Next on Drum
Actor Lesley Musina ready to enforce the law in new TV drama The Executive