Column: Live life like the Hawks vehicle is around the corner 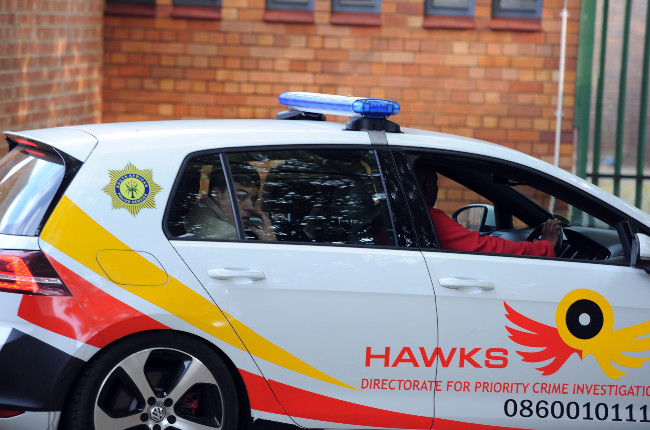 The Hawks vehicle has some folks scared that they might be next. Photo: Beeld / Felix Dlangamandla/ Gallo Images

How could we after all? We live through the worst crimes, and poverty knows some of us by name.

But there's one thing that's had some crooked South Africans and even the innocent a little shaky.

When that car rolls around the corner, when it reaches places in rural areas that even ambulances can't get to, that's when people get scared.

That's when life gets real.

Read more | Who is John and why does he have the keys to the South African gate?

The corrupt aren't scared when they put in false invoices worth millions of rands for doing nothing.

They are confident when they take money meant to help the poor navigate through the worst health crisis we’ve lived through.

They not even scared when they go out there and flash cash at various shops, clubs and live life large.

When that pastor takes that collection plate home, there’s not even a twinge of regret.

Nope, that's just another day of enjoying the fruits of corruption.

But once that dreaded Hawks vehicle crosses provincial borders in search of the latest "victim", then fear starts to set in. And those who had no qualms about spending millions that could have made a difference in hospital care, in schooling, in policing, in lives of the poor, they quake.

Then they cover their faces and walk with reluctance to the back seat of this almost-luxury vehicle.

Because a perp walk to a Hawks car slaps different than that one that's heading to a van.

You’re in a different league when that car stops outside your house, your business, and your church.

This is why I think it might be time to start living like the Hawks car is around the corner.

You know that walk you sometimes do around a shop when a security guard is following you and you want to show just how empty your hands are? That's the feeling that our businessmen and women need to have before they get into business with government.

Before you sign that invoice, before you steal those millions, before you fix that tender, look outside the window and imagine the confident strut of a Hawks officer knocking at your door.

Just imagine it the spectacle of your neighbours gossiping, telling each other they knew something was fishy with your sudden new money.

Just picture the young kids in your street running next to the Hawks car pointing at your face and shouting out your name like a nursery rhyme.

If big media exposés don't scare you, if you can sleep at night even though kids who were due to get food parcels from the money you stole go to bed hungry – that's between you and your higher power.

But maybe just that one split second of thinking about that Hawks car, about that perp walk that will have even the corner boys talking about you, maybe that might make more of a difference.

For the ordinary South African, it can be so discouraging reading stories of corruption, stories of billions of rands just disappearing into the vast unknown.

"Just imagine the confident strut of a Hawks officer knocking at your door."

But when we see that Hawks car slowly making its way towards a new target, we get hopeful that maybe, the buck will stop there and justice will be served.

It might be a misguided but it’s better than nothing.

So whether you are a politician, a businessperson, a government employee or an ordinary person, living like the Hawks might come knocking might just keep you honest, even if it's for one project or tender.

We live in a world where facts and fiction get blurred
In times of uncertainty you need journalism you can trust. For 14 free days, you can have access to a world of in-depth analyses, investigative journalism, top opinions and a range of features. Journalism strengthens democracy. Invest in the future today. Thereafter you will be billed R75 per month. You can cancel anytime and if you cancel within 14 days you won't be billed.
Subscribe to News24
Related Links
Muvhango’s Macdonald Ndou may still be charged again after thorough investigation by Hawks
Ntlemeza heads to SCA to appeal ruling on his appointment
Ntlemeza officially out, Matakata takes over as Hawks boss
Next on Drum
Column | If you don't have anything nice to say, say nothing