Fiction | Caught in the Act 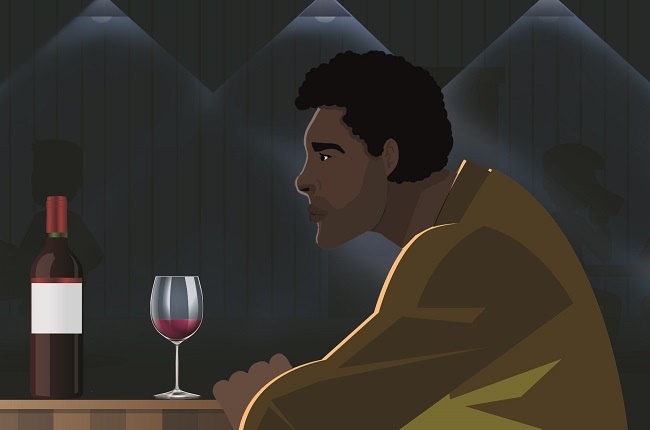 Feeling dejected and out of place, Sipho waits in a trendy bar to confront his wife and her new lover.
Michael De Lucchi

The Den was one of the most inviting haunts for the city's crème de la crème. It was the place to be seen for those dapper, up-and-coming young things in bespoke suits who cockily swigged fine single malts and rounded their vowels.

It was certainly not the sort of place for yours truly – a 45-year-old guy who had an awkward manner in crowded spaces. Yet here I was, slumped on a high stool, elbows resting on the shiny wooden bar counter, with a glass of wine untouched before me. I don't particularly like wine – I've never been much of a drinker but I figured I had nothing to lose – except Nombulelo, the woman I'd been married to for the past 20 years.

Ah, Nombulelo! My once-upon-a-time high-school sweetheart. Long-limbed with high cheekbones and a smile that's never allowed me to forget just how lucky I am. Like me, her origins were deep in a ghetto more than 30 minutes from the city.

If I leant over this club's fifth-floor patio, I could point you to the rising smoke and sparse floodlights and proudly say, “That, right there, is home.” On those rutted streets, we kicked a ball, played house and hobbled with parched feet over to the spaza shop of corrugated iron to buy all sorts of treats.

With perfectly-set teeth and a flawless physique, Nombulelo was the girl everybody desired to have – and the last girl on earth you'd ever expect to show any interest in me.

Me, Sipho, the barefoot kid with thick-lensed spectacles courtesy of a benevolent NGO. The kid nobody wanted in their soccer team, always relegated to the sidelines and hoping somebody would tire so I might finally get a shot. But it never happened, so all day I kicked up dust with my head bowed, feeling all alone in the world.

All alone until one day I heard a sweet voice call out, “I take it you're the official mascot?”

“I, I, I'll have my turn soon enough,” I stammered bravely, overcoming the shock of having discovered the source of the question.

Nombulelo gave me the sort of look that suggested she wished she could believe me and reminded me that standing on the sidelines was like watching your life slowly slipping by. She asked if I wanted to do something cool. And, of course, I nodded my consent.

Over the coming years, we wiled away endless afternoons in the park and trotted back and forth between school and the library, her satchel slung over my shoulder.

She recommended books – difficult ones with big words. “That's what the dictionary's for,” she said in response to my pitiful moaning.

How could a girl so young and from such a haggard neighbourhood be so knowledgeable? Literature, she told me. Books had taken her on boundless journeys to the ancient past, across raging seas, through grand philosophies and into the unknown future.

At varsity we shared a flat. She was a popular music student with a fetish for big-band jazz. I was the same geeky fellow, but now poring over English classics, and her bright presence occasionally allowed me to partake in her celebrity.

Graduation was the divine sign to propose. So before Reverend Khumalo and the teary-eyed congregants at my mother's church, we pledged our vows to stick it out in sickness and in health, until death we parted.

Before we knew it, we were a family of four – Simon born just a year on, followed by Lusanda not long after. Once an aspirant musician, Nombulelo evolved into a doting mom changing nappies, taking the kids to sports practice and holding my hand in the high-school hall when Simon completed his matric.

Now, 20 years on, I was wondering if those marriage declarations hadn't gradually slipped her mind. A part of me wondered if she didn't resent me for having put her dreams on hold.

I can't say I blame her, given my impressive rise through the corporate ladder at the Proclaimer Newspaper Group, where everyone called me boss and I occupied a massive office lined with deep piled carpets and a 360-degree view of the splendid city.

The pay was worth all the flak I had to stomach from politicians, execs and everybody in between. But the hours, often so long I sometimes crept into my house to find my wife spread out on the couch – apparently unable to keep her eyes open for my unwelcome arrival.

I knew she was cheating on me. Why else would she shimmy into those figure-hugging jeans every Wednesday evening (and sometimes Fridays too), layer herself in makeup and dash for the front door? She'd often be in such a rush that she forgot to kiss me or tell me when she expected to return.

Although I was not the jealous type, I struggled to control the envy that surged through me when she was texting – something she did a lot of lately. She playfully lay on the couch, giggling shyly, stroking her hair back and, based on the flirtatious movement of her fingers, I shuddered to think what she was sending.

Out of character, I once secretly went through her phone and scrolling through her inundated messages folder, I found it. A text from Dan: “Looking forward to The Den this coming Friday. Hope you'll dress to kill.”

And this was the reason I was planted in a dim corner of that establishment, scouring the dance floor, eyes sweeping through the private booths and trying not to draw too much attention to myself.

The ambiance was as energetic as you might expect of a youthful hangout. Chatter mingled with the clink of glasses, ambitious business talk hummed from every nook and a pompous sextet got ready to blow shuffling African jazz melodies. Definitely Nombulelo's taste in music.

But I hadn't come here for blaring trumpets and booming basses. I was here for that strong-jawed fellow, Dan, who the barman pointed out to me. He was sitting across the room, gazing with a broad smile as the band gathered steam and the front lady belted it out in a harrowing falsetto. His eyes never left the stage and when they did it was only for a quick glance at his wristwatch.

Perhaps Nombulelo had decided against the idea, or was running late, or maybe – I was crossing my fingers – she had stood him up entirely.

Then, just as I was thinking I could breathe a sigh of relief, Dan leant in to hug a long-limbed woman in figure-hugging jeans whose face I could not make out because her back was turned to me. Pulling out a chair, he summoned the waiter, who moments later placed a glass of white wine on the table.

White wine was Nombulelo's poison. I watched the woman run her hand through her weave in the same fluid motion my own dear wife used. It must be her – the body, the hair, the wine – and, not wishing to spend a moment longer in the dark, I bulldozed my way towards them. If you've heard the term “caught red-handed”, this was it.

My clenched fists banged hard on the circular marble table. “What the heck are you doing with my wife?” I barked.

“Yes,” I growled, turning to his companion, “my . . .” The words curdled in my mouth. This was definitely The Den, the man was Dan, but the woman, though bearing a vague resemblance, was definitely not my Nombulelo.

Incredulous stares shot in my general direction and I wished the earth would open up and swallow me whole. Then it got worse. The spotlight (quite literally) shined straight onto me and a voice from the stage, husky and velvety, announced, “Ladies and gentlemen, I never thought I'd live to see the day when my husband, the shy recluse that he is, would patronise a joint like this.”

I closed my eyes and thought I must be dreaming – I could not see the woman on the stage, but I’d known that voice since my childhood. As sweet and compassionate as the day I’d been standing alone on the fringes of the soccer field years ago.

“So,” she continued, “please let’s give it up for my husband, Sipho, and Dan, my manager.”

We live in a world where facts and fiction get blurred
In times of uncertainty you need journalism you can trust. For 14 free days, you can have access to a world of in-depth analyses, investigative journalism, top opinions and a range of features. Journalism strengthens democracy. Invest in the future today. Thereafter you will be billed R75 per month. You can cancel anytime and if you cancel within 14 days you won't be billed.
Subscribe to News24
Next on Drum
Fiction | A Random Act of Kindness