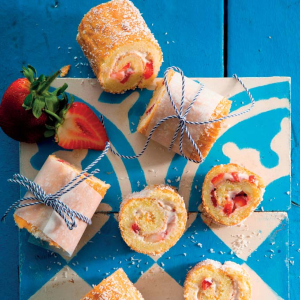 Line a baking sheet with baking paper and grease with nonstick spray.

1 Put the egg yolks in one mixing bowl and the egg whites in another.

2 Whisk the egg whites, adding half of the sugar as you whisk. Once stiff peaks have formed, set aside.

3 Add the rest of the   sugar, the lemon zest and flour to the egg yolks and whisk until well combined.

5 Transfer the mixture to the prepared baking sheet and lightly smooth the surface. Bake for 12- 15 minutes or until golden and done.

6 Sprinkle the coconut on a tea towel. Turn the cake out and remove the baking paper. Put the cake on the coconut, on the side where the paper was. Roll the cake up in the tea towel while it’s still warm and leave to cool completely.

Mix all the ingredients well. Unroll the cake and remove from the tea towel.  Spread filling on the side without coconut and carefully roll up again (the coconut should be on the outside). Cut into 6-12 rolls.