His  fingers move deftly over the controls, gently twisting knobs and sliding the crossfader. DJ Phobia’s head bobs in time with the pounding beats and it’s plain to see that he is loving it.

The blind, Bethlehem-born DJ has played alongside some of the greats, including Black Coffee, DJ Christos, Vinny Da Vinci, Monique Bingham, DJ Shimza, and his most recent collab was with ex-Jamali singer Jacqui Carpede, on the soulful single, Twilight.

Bongani Mbambo (35), as he’s known to his family, says he is “music royalty” and does not consider his lack of eyesight as a disability.

“Being blind does not come in the way of doing what I love. I eat, sleep, walk, talk, and dance like everyone else. And to top it off I’m a great DJ, meaning there’s something special about me,” he says.

He fell in love with music as a young child, when his mom, Meisie Mbambo (71) bought him his first keyboard when he was five-years-old.

“I taught myself how to play the keyboard until I mastered it,” he says. 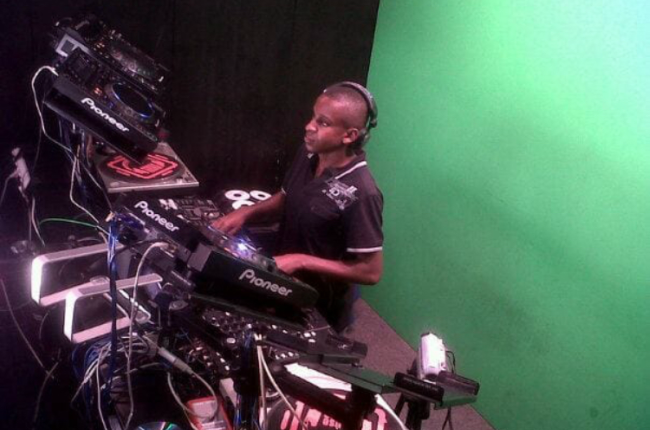 When he was 14, his mom, a retired school teacher, took him to the 1995 Total Invasion concert at Bohlokong Stadium in Bethlehem in the Free State, where he first heard DJ Christos perform.

He was hooked, instantly.

“When my mom realised who much I loved music, she took me everywhere with her; I attended concerts, shows and parties and I got to meet the likes of Brenda Fassie, Chicco Twala, Yvonne Chaka-Chaka, and others,” he recalls.

He also got to meet DJ Christos, and told him he also wanted to be a DJ, one day.

“Christos told me to finish school first and then he would gladly assist me.”

And that’s what DJ Phobia did.

He moved to the Western Cape to attend the Pioneer School for the Blind in Worcester and went on to study Sound Engineering at Athlone Institute for the Blind where he graduated with a National Certificate.

“My mom allowed me to study at different schools until I found the perfect school for me. I went all the way to Worcester because she wanted me to be happy and she wanted the best for me,” he says.

DJ Christos was true to his word.

DJ Phobia looked him up when he completed his studies, “and he remembered me from when I met him when I was 14. He invited me to stay over at his house for two weeks so I could attend the SA Music Conference with him”.

His mom gave him the go-ahead for the visit, and he was welcomed into the veteran DJ’s hom.

“I stayed with him and wife Tebogo. Within an hour my arrival at his house I was behind the decks because he saw my hunger to succeed,” says Phobia. It was during this time that he was taught how to DJ.

While he was practicing at Christos's house, he met Black Coffee who had popped in for a visit.

“I was very excited to meet him. He showed me a few tricks behind the decks that I still use today.”

Now an established DJ himself, Phobia is also a sound engineer, a producer and owns the online radio station, The Funky Experience. He often performs on Metro FM’s Urban Beat on weekends too.

Despite his lack of eyesight, DJ Phobia can go deck-to-deck with any DJ, he says.

“I don’t need to be treated differently. I play with the same turntables and CDJ [a specialised digital music player for DJing] as people with vision. Once I figure my way around any equipment I can pay for hours.”

His dream, he says, is for him and business partner Ramotsho Ramokoka to help others, with or without disabilities, the same way DJ Christos helped him make his dream a reality.

Growing Phobia says his family loved him unconditionally, and allowed him to be himself.

“They accepted my situation a long time ago and I grew up happy and loved,” he says.

He was just three months old when he was diagnosed with retinoblastoma, eye cancer which begins in the retina. It is the most common eye cancer in children, and it robbed Phobia of his sight.

“My mom apparently control my crying, until I was taken to hospital. Tests were conducted and they discovered I had cancer of the eyes,” he recalls.

“In all honesty, I don’t know what it’s like to have my sight, so I don’t wish to see. I am happy the way I am because it’s all I know.”

It was only when he ventured out of the family home that he was reminded how cruel the world could be.

“I was teased by other kids, and I could feel their stares, but when they realised I could do the same things as them, they would forget. I rode a bicycle, played soccer and I had what I considered a ‘normal’ childhood,” he says.

His older sisters Buyisiwe (49), Palesa (46), and Phindiwe (40) have always supported him and defended him while growing up.  “My sisters stood up for me against bullies, but I didn’t have to deal with a lot of bullying because I played the same games as other children,” he says.

The dating game has never been a priority for Phobia, but it also hasn’t been easy.

“I have dated many times. In my last relationship, I dated someone from 2016 until 2018, and that was the first time I realised that non-disabled people sometimes struggle with dating a person with a disability,” he says.

“My ex-girlfriend would often tell me how her family disapproved of our relationship because I was blind. Her friends would ask why she was wasting her life dating a blind guy? Has she given up on life? The relationship was fine until there was pressure from her family and friends and we had to end things,” he says.

He is now in a long-distance relationship which began in January. “My girlfriend stays in Lesotho. She was meant to visit me in Ebony Park in April but the lockdown happened. And I am yet to see if the love is real,” he adds, explaining that, “sometimes, people use people with disabilities to get money or to get ahead in life. It is very important to be able to differentiate who is genuine and who is not. But I don’t worry too much about relationships because I am working on becoming a world-recognised icon”.

We live in a world where facts and fiction get blurred
In times of uncertainty you need journalism you can trust. For 14 free days, you can have access to a world of in-depth analyses, investigative journalism, top opinions and a range of features. Journalism strengthens democracy. Invest in the future today. Thereafter you will be billed R75 per month. You can cancel anytime and if you cancel within 14 days you won't be billed.
Subscribe to News24
Related Links
Self-help author Siya Ngcangca on how to find happiness during trying times
Local author Mohale Mashigo on being selected for an international residency in France: “It...
‘I was homeless and drug addicted now I’m a two-time author’
Next on Drum
Miss SA finalist Zoey Seboe on living with the rare skin condition lamellar ichthyosis