Father’s Day is celebrated globally, to recognise the contribution fathers and father figures make to children’s lives. It’s also a day that is a reminder of the importance and challenges that come with fatherhood.

Stats SA conducted a General Household Survey in 2017 and presented the findings that 61,8% of children in the country have absent fathers. This means that present and active fatherhood is an anomaly in this country, however, many fathers are stepping up to the plate and fulfilling their responsibilities.

To mark this Father’s Day, DRUM speaks to four fathers about the days they became fathers and the experiences and lessons that have come with fatherhood. These are their stories.

Mandilakhe Dlula, says he remembers it very well as his son’s arrival was during the 2010 Soccer World Cup, a time of excitement on a national level.

“It was so amazing, the feeling that I had . . . and being overwhelmed by the excitement. When I looked at him, I realised that I am now a father and am now responsible for this human being. There were a lot of emotions going through my mind, no words can accurately describe the emotion I felt.

“The most important thing I’ve learnt through playing an active role in my child’s life is responsibility and maturity. When my son arrived, it was no longer about me but also about this other person who depends on you – completely. It also requires you to be selfless and relook a lot of things, like your finances and how you spend your money; and where each cent goes, either to buying them food or any other necessities for them.

“Being a part of his life excites me, being a father to him and showing him the love and affection he needs. I think it's very important for a child to know that they have a father who loves them, their role model and someone they can turn to for any guidance or when issues arise.”

Read more | Abdul Khoza’s bittersweet birthday message to his firstborn : ‘I pray that time gives us a chance to reunite’

“I’m very close to my son because I did not have a relationship with my father so I know how it feels to have that person or a father figure to do things with. One of the most important things for me is to do things with my son, and I take interest in the things he does and watches, so whether we’re watching SpongeBob or any cartoon, playing soccer or doing homework, I want to give him attention and take interest in even the small things. It’s important for men to be present and play good roles in their children’s lives, a lack of this may open them up to certain emotional issues later in life.

“I love being a father, I have been there for each of my son’s milestones. And in us growing up together and doing things together, it’s creating this beautiful father-son bond and I couldn’t be more grateful,” Mandilakhe shares.

Mziwothando Mazwi recalls feeling fear and excitement upon receiving news that he was a father to someone. “It was scary and exciting when I first found out I was a father. I was filled with love. I thought to myself that I was going to love and protect my little person and she would always be this little person  I love,” he says. “She’s grown so much and can never keep her mouth closed, she can talk till the sun sets – but I still love her for it".

“Fatherhood has taught me to love unconditionally. No matter how angry my daughter makes me feel, she is always going to be my little person. I have to teach her what I know and she has her own life to live, and her own lessons to learn too. There will come times where she will make mistakes and I will stand by her and be a space for her whenever she needs guidance. It has also taught me patience and selflessness because I know there is someone who looks up to me for guidance. I love being a father to Usi".

“Fortunately, my mother is helping me raise her. She is the primary caregiver but I’m still playing an active role in her life. Witnessing her growth has been beautiful, I love to see her grow into the person that she is now. She is a smart young lady who enjoys life. To know that I am partly responsible for who she is always fills my heart with indescribable joy", Mziwothando shares.

Read more | Local single dad on raising his son: ‘I want to do for my son what my dad didn’t do for me’

Lazola Daweti from Cape Town remembers the first day he became a father like it was yesterday. “Honestly, initially I was very nervous and I wasn’t too sure about the idea of becoming a father because at first I felt like the timing was not ‘ideal’. At the time my partner and I were experiencing some problems in our relationship, so I felt overwhelmed,” he says.

“But as time went by, I started getting used to the idea and as soon as he was born I was engulfed with excitement. And I had this instant feeling of being overly protective about him. I felt like, ‘Here's this little dude I hardly even know but for some reason I have this sense of fondness towards [him]’,” Lazola jokes.

Sharing what fatherhood has been for him, Lazola says it’s a scary journey but it’s merely based on the fact it’s your first child. “The thought of knowing I have someone who completely depends on me does stress me out at times. Because in whatever I do, I have to make sure I don't fail because it's not only about me anymore, there's someone who'll also be affected by my actions. I am, however, giving myself the chance to figure things out as I go.

“I'm learning a lot, especially about life. There are things in life that you know of, we can tell good from bad and right from wrong, but that doesn't necessarily mean we have it all figured out, we learn as we go about it and it's the same as being a father. I'm learning a lot everyday as I get to know my son,” he says.

This year, unfortunately, he will be spending Father’s Day without his son. “So, he's been in the Eastern Cape with his mother and they got stuck there due to the corona[virus] outbreak. This will be my first Father's day but I'll be spending it without him,” he says. “It's kind of hard to even think about it but I guess I'll just have to be strong about it, nothing a video call can't fix.”

Read more | Local dad shares: ‘I homeschool my son and work at the same time – this is how I do it’

Asavela Peko recalls how his child’s birth came as a beacon of hope during a really hard time. “Honestly, when I got the call I was passing Tarkastad in the Eastern Cape towards the Western Cape [on the way] from my grandmother's funeral on 14 February 2015. Seating in the back of an Avanza the call came. Zintle Mqatana (mom kaboy) broke the news. I couldn't believe it, on Facebook she sent the photo. I just looked out of the window and cried because I was scared – being a father was something I yearned for but also feared. And on Sunday 15 February 2015, I was finally given the opportunity to live. My grandmother didn’t get the chance to see or meet him, but here he was, the start of a new life,” he adds.

“It's been really exciting and challenging, and moreover a journey of self-discovery, sacrifices and questioning some moments in my childhood that aren't really clear nor shared to me. I am enjoying the journey, even though at times it's harder to always manage to get everything done but I have all the love and support I need to raise Kamvelihle and his sister, Indalo Mqatana, to the best of my abilities. 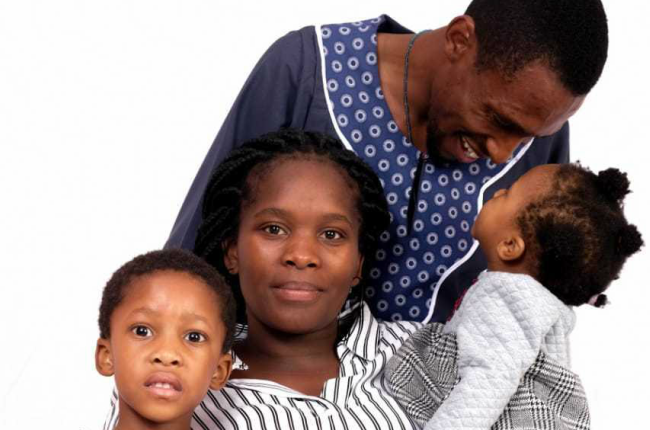 “Through being a father, I have learnt the importance of taking responsibility for my actions, the significance of fulfilling commitments made to them as they wait on them and, mostly, I have learnt to understand some sacrifices my mother used to make for me and my sister and late brother.”

Asavela expresses that fatherhood and parenting is difficult, but rewarding. “It's difficult, but a path I am proud of being part of, and intend to fulfil the commitments I've made because of this role. In all this, one thing that makes it more delightful is seeing them laugh, smile and doing the little childish things I wish I could keep them doing forever instead of the world that is brutal and awaiting them. They understand I love them, and being a present father despite not being married means a lot about my commitment to loving, caring, supporting and laying my life down for them – if the situation calls for such. I try as much despite my overwhelming and complicated life – due to other commitments like studies and social activism – to be around them, and whenever possible to buy them what they need and want.

“Lastly, the fact I am not perfect and not always able to provide, the overall support I get from their grandparents is really giving me all the right reasons to be a proud father and be able to say, 'Brothers out there, it's worth a try rather than a run – be responsible, we are here to also support you but don't neglect ‘your’ children,” he shares.

We live in a world where facts and fiction get blurred
In times of uncertainty you need journalism you can trust. For 14 free days, you can have access to a world of in-depth analyses, investigative journalism, top opinions and a range of features. Journalism strengthens democracy. Invest in the future today. Thereafter you will be billed R75 per month. You can cancel anytime and if you cancel within 14 days you won't be billed.
Subscribe to News24
Related Links
Thomas Gumede to become first-time dad!
iFani opens up about his break from music: “I’m taking time to raise my son”
Three local young dads on experiencing fatherhood: "Even though I was terrified. I had to be a man"
Next on Drum
Textile designer Bonolo Chepape on her new, heritage-inspired work for fast food chain Nando’s