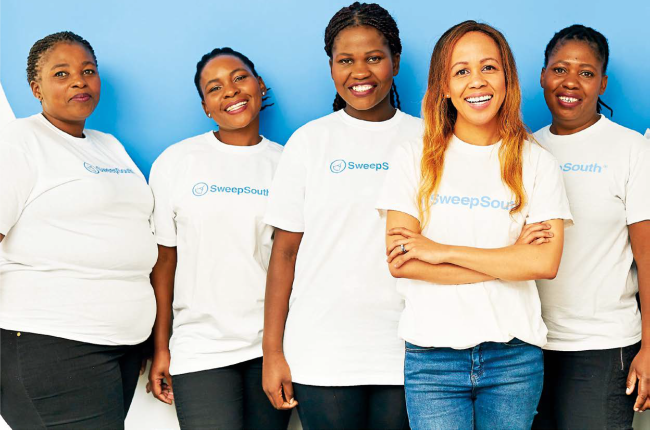 SweepSouth has created over 20 000 jobs for helpers.
Supplied to DRUM

This article previously appeared in the print edition of Drum.

The term labour of love has seldom been more appropriate. She’s sacrificed a lot to get her “baby” off the ground – including her home – and every spare cent she has she ploughs back into her business. Yet slowly but surely her efforts are being rewarded – and the cherry on top came when she recently scooped the Forbes Woman in Africa technology and innovation award.

The awards celebrate African women in various fields who “are reshaping history, closing inequalities and pioneering new avenues of wealth and creation, and in turn lifting others with them”. And Dr Aisha Pandor (35), the judges felt, fit the bill.

Aisha is the co-founder and CEO of SweepSouth, an app that  allows users to book and pay for cleaning services – and which has provided work for more than 20 000 domestic workers since its inception. Aisha said she was “surprised but honoured” to have been chosen the winner out of hundreds of women from across frica. “It’s recognition for the hard work our team does every day towards our mission, which is to to help domestic workers find opportunities and serves as further inspiration and motivation for us to continue.”

Users of SweepSouth, which Aisha started with her husband Alen Ribic (39) in 2014, request a cleaner on the app or website and have an option to select how often they would like a cleaner’s services. Clients are charged according to the number of rooms in their homes and can select additional services such as laundry or cleaning a fridge.

For the Cape Town-based couple, the concept was bigger than just connecting cleaners with clients, but also ensuring a better quality of life for the cleaners. “With this new way of connecting both sides, it was also to ensure better rates of pay for domestic workers – we’ve got a very long way to go in South Africa – and better treatment for them,” Aisha says.

Growing up, she felt she stuck out like a sore thumb.  “I grew up in a mixed-race household,” Aisha says.

“I struggled a lot when I was young because I just wanted to fit in. I felt I wasn’t black enough for most black South Africans and I was too black for the Muslim community.” Her parents are international relations and cooperation minister Naledi Pandor and businessman Sharif Pandor. “My parents would always say it’s good to be different. And eventually I started feeling that myself,” she says.

“I now appreciate the fact that I’ve been exposed to many different people and cultures, and I’ve learnt to think of being different as a superpower.” Her parents also taught her the importance of social contribution. “My mom would say things like, ‘We have so that we can give’. They really believed in the idea of social service,” Aisha says. While completing her PhD in human genetics at the University of Cape Town, Aisha had to have tough conversations with herself so her parents’ teachings resonated with her. Was doing research the best thing she could be doing in terms of productivity and making a positive impact in the country?

“I finished my PhD and decided not to continue with academics,” she says. She started working as a management consultant but realised she hated being an employee. So she quit in 2013 and started looking for business ideas.

“My husband also resigned because he was facing similar challenges.” Around this time, her domestic helper went on holiday and they needed a temporary stand-in. Aisha quickly became frustrated by the process of looking for a replacement. That’s when she had her light-bulb moment: why not develop a mobile app that connected people with domestic helpers? Aisha and Alen did extensive research and launched their app in June 2014. With his IT expertise, Alen was a perfect fit to co-found the business. “My husband has 20 years of experience in the field of technology. I had the business background and I also brought a lot of the principles I learnt during my science degree,” Aisha says.

"We had to move in with my parents and lived with them for almost four years until we were in a position to get our own place again."
Aisha Pandor

But there were many challenges facing the young couple. They had to sell their home to fund their business when their eldest, daughter Ajla (now 10), was just five years old. “It was difficult,” Aisha admits. “We had to move in with my parents and lived with them for almost four years until we were in a position to get our own place again.” During that time Aisha and Alen had their second daughter, Zora (now 3),  and the four shared one bedroom in her parents’ Johannesburg home. Initially Naledi and Sharif didn’t understand why their daughter wanted to quit her paying job and start a cleaning company, but they eventually came around.

“They started to see we were serious about it. We were putting our money behind the project and slowly getting investors,” Aisha says.

One of the first challenges was to secure customers. Their first client was their neighbour, whom they begged to try out their services. They also handed out pamphlets at busy Joburg intersections. It was a gamble – e-commerce in South Africa wasn’t where it is today and people were reluctant to trust the platform. “It wasn’t a given that we were going to have the cheaper smartphones we have now or the broad access to data and internet connectivity,” Aisha says.

On the domestic-worker side, Aisha and Alen had to deal with the reality that few could afford smartphones at the time so the couple took out contracts and loaned them to the cleaners. Eighteen months after launching SweepSouth, they gained their first investor in tech entrepreneur Vinny Lingham. They have since secured institutional investors and hope to make a profit in 18 months’ time. The business is also expanding.

“We have an outdoor cleaning service for things like gardening and a platform called SweepSouth Connect, which has electricians, plumbers, handymen and locksmiths,” Aisha says. “We’ve also launched a shop, where we sell things like home-cleaning products.” The family have become financially secure enough to move into their home in Cape Town and have also welcomed son Daniyal (1).

With the coronavirus causing panic in the country, Aisha says they’ve started a fund to help SweepSouth’s domestic workers whose customers have tested positive, are self-isolating or are symptomatic. Features have been added on the app encouraging customers to continue to pay domestic workers even if they have to cancel their bookings.

“It’s incredibly difficult – not just for domestic workers, but any worker who’s paid to do a job in person. There are many workers who are going to be affected by the coronavirus,” Aisha says. SweepSouth wouldn’t be possible without the people who work in their office, she adds. “Every one of them is aligned and onboard with our social mission, which is to help domestic workers find work.”

We live in a world where facts and fiction get blurred
In times of uncertainty you need journalism you can trust. For 14 free days, you can have access to a world of in-depth analyses, investigative journalism, top opinions and a range of features. Journalism strengthens democracy. Invest in the future today. Thereafter you will be billed R75 per month. You can cancel anytime and if you cancel within 14 days you won't be billed.
Subscribe to News24
Related Links
“How I went from depressed about my weight to a proud plus-size model”
Next on Drum
From the archives | I'm 29, unmarried and have no kids - this is why I did an irreversible vasectomy