The surroundings are simple and minimalist too – everything in the chapel is white except for a burst of green in a floral arrangement on one side of the wedding arch. The couple beam at each other from the altar at the trendy Eureka Wine Estate in Durbanville, Cape Town – the culmination of a romance that began as a friendship and then took off in the unlikeliest of places: McDonald’s. One of the fast-food chain’s branches was where Blue Bulls and Springbok scrumhalf Rudy Paige (28) and his girlfriend of four years, Ronelle Kolkota (30), had their first date.

“I came straight from work and he was in his blue training kit and took me to McDonald’s in Joburg,” she recalls with a laugh. But now Ronelle is resplendent in a classic white gown from Bridal Manor boutique in Pretoria – and Rudy can’t keep his eyes off his gorgeous bride. Rudy’s pastor dad, Johannes, conducts the ceremony and hands them each a candle to symbolise the end of their lives as single people. 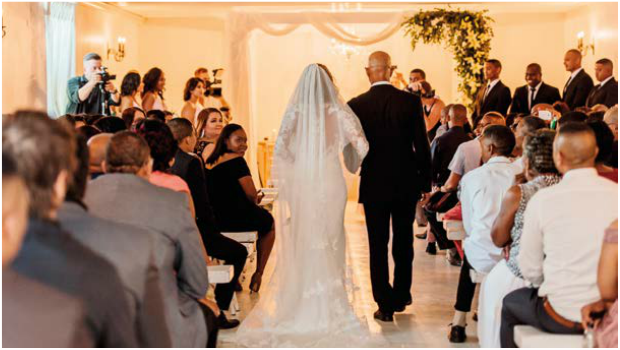 When he finally pronounces them husband and wife, the groom takes his bride by her slim waist and gives her a passionate kiss, to the delight of guests. There are plenty of famous faces in the congregation, including rugby players Siya Kolisi, Jesse Kriel and Handré Pollard, and former 7de Laan actor Christo Davids, a childhood friend of Rudy’s.

Finally the newlyweds blow out their individual candles and light a bigger one together, representing their new identity as “one in flesh”. They leave the chapel hand in hand to a shower of white rose petals while the United Brass Band, a minstrel group from Hanover Park on the Cape Flats, plays some of couple’s favourite songs. Ronelle can’t contain her joy and lifts the hem of her dress and starts to dance. And why not? She’s just married her best friend.

Their paths crossed in 2009 when Ronelle was a first-year architecture student at the University of Johannesburg and Rudy was a member of the varsity’s Under-19 team. They were “just friends” for years until love blossomed in 2014. “He’s younger than me and I thought he probably wouldn’t be interested,” Ronelle says. By then she was a manager at the logistics company in Joburg where she still works and Rudy was playing for the Blue Bulls in Pretoria. She decided to make a move and sent him a text that simply said, “Hello”. His reply? “Do you want to get lunch?” Cue the infamous McDonald’s date – and the pair have been inseparable ever since.

Rudy, who’s originally from Heidelberg in the Western Cape, and Ronelle, from Eerste River in Cape Town, set up home in Pretoria last year. And it’s here where, the day before Ronelle’s 30th birthday in March last year, Rudy proposed – while she was making coffee. “The box of the ring didn’t fit into his pocket and he was worried he’d lose it,” Ronelle says. “As I stood in the kitchen he went down on one knee.”  Rudy had planned to take her out to spoil her the next day but Ronelle was happy to hole up at home with him. “I was so excited I didn’t want to go anywhere!” Rudy had serious butterflies before he popped the question, he admits. And the same was true on the day of the wedding. “It’s not like a rugby match, which involves preparation and you know exactly what’s coming,” he says. Rudy was “not involved at all” in the planning, Ronelle says with a laugh. “He said he’d asked me to get married so his work was done!” But at least he chose the song for their first dance as husband and wife, Ronelle says – Ed Sheeran’s hit love ballad Perfect. Her platinum wedding ring is in the shape of a protea and Ronelle loves it, Rudy says. “It’s quite a plain ring. We’re an uncomplicated couple and the ring describes us well.” Uncomplicated is the best way to describe the reception too – the décor is understated and rustic but with a classic touch. Christo is MC for the day.

During his speech he asks Ronelle to put her left hand on the table and Rudy to place his right hand on top. “Take a good look, Rudy, because this is the last time you’ll have the upper hand in your relationship,” Christo jokes as laughter erupts from the guests.

When it’s his turn at the microphone Rudy’s new father-in-law, David, says he was the main man in Ronelle’s life until she met Rudy. “My wife, Jacky, never watched rugby with me until Rudy came along. Now’s she an expert,” he jokes.

Rudy’s mom, Joany, also has some words of wisdom. She knows her son can be difficult, she says – and she’d hoped he’d find someone who’d know how to manage his attitudes. “Love each other always,” she finishes. Formalities aside, the guests tuck into carpaccio starters, a juicy lamb shank for mains and a crème brûlée for dessert. When they cut the impressive threetier wedding cake Frank Sinatra’s Love and Marriage plays in the background. “We couldn’t decide on a flavour for the cake,” Ronelle says. “So we got them to make one tier in chocolate, one in tiramisu and one in red velvet.”

Their honeymoon will have to wait for the moment, Rudy says. “I had a groin op a few days before the wedding and it can take up to eight weeks to recover. “During Super Rugby, when my team gets a week off, we’ll have a holiday someplace nice where we can enjoy each other. “Without any cellphone reception.”

We live in a world where facts and fiction get blurred
In times of uncertainty you need journalism you can trust. For 14 free days, you can have access to a world of in-depth analyses, investigative journalism, top opinions and a range of features. Journalism strengthens democracy. Invest in the future today. Thereafter you will be billed R75 per month. You can cancel anytime and if you cancel within 14 days you won't be billed.
Subscribe to News24
Next on Drum
They want to make it easier for the average South African to quickly get legal help when they need it