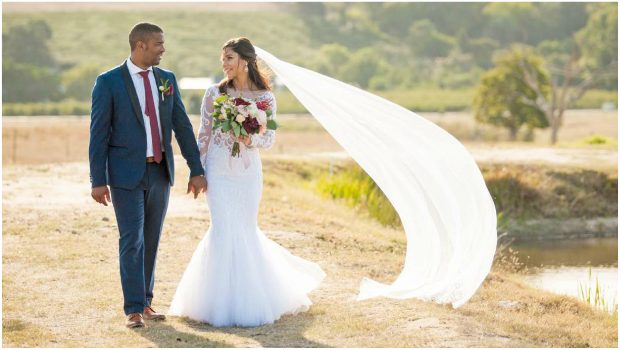 The man of the moment, however, is unfazed by the sweltering conditions.

He’s used to turning up the heat on sun-baked cricket pitches around the world as he hurtles balls at full speed to his hapless opponents – so waiting around in a three-piece suit is practically child’s play to him. Vernon Philander (32) has already bowled his most important maiden over and is all set for the next step: marrying the love of his life, Mandy Hudson (33).

The setting is the picturesque Brenaissance Wine and Stud Estate near Stellenbosch, Cape Town, and 120 of the couple’s nearest and dearest have come to witness the happy occasion. The ceremony is about to begin and guests take their seats on white wooden benches. Vernon, dressed in a blue suit with black trim , takes his place at the front of the chapel alongside his two best men – Cape Cobras teammate Stiaan van Zyl and Brandon Philander, one of Vernon’s three brothers.

Then it’s time for the main attraction. Heads turn as Mandy enters the chapel on the arm of her proud father, Nigel, while Johnnyswim’s Touching Heaven plays in the background. Father and daughter slowly make their way down the white-carpeted aisle which has been strewn with pink and white rose petals. A radiant Mandy Hudson walked down the petalstrewn aisle to her cricket star husband on the arm of her proud papa, Nigel.

The bride, clutching a bouquet of roses, tulips and dahlias, looks spectacular in a gorgeous open-back, mermaid-style gown by Cape Town designer Robyn Roberts. After Nigel hands his daughter to her groom, the couple turns to gaze at each other.

It’s a moment that’s been 12 years in the making. The pastor can wait just a few more seconds.

He knew she was the one when they met in 2006 through mutual friends. Their first date was at Vernon’s favourite restaurant, Bukhara, at the V&A Waterfront and Mandy was taken by him too.

“I thought he was funny and charming and he made me smile. That attracted me to him.” But then his cricket career took off and they went their separate ways.

“Life sent us in different directions first but I knew we’d cross paths again,” says Vernon, who’s originally from Ravensmead on the Cape Flats. “We stayed good friends over the years,” Mandy says. Three years ago things progressed from friendship and a romance blossomed – until Vernon felt it was time to pop the question.

Mandy smiles as she recounts his quirky marriage proposal in September 2016. They were in the flat she shared with her dad in Wynberg, Cape Town, and she had no inkling of what was to come.

“He’d put the ring in a tub of eye cream and I thought he wanted to give me a cosmetic product. Next thing I know he’s going down on one knee asking me to marry him.” She wasn’t ready for the big moment, she admits.

“I was tired and looked like death!” Because of Vernon’s tight schedule they weren’t able to get married till now. “We were engaged for a while because he travels a lot,” Mandy says.

Pastor Grant Banwell from the Joshua Generation Church opens the ceremony with a prayer in which he asks the couple’s marriage be blessed with wisdom and compassion. This is followed by guests singing two of the couple’s favourite hymns, Power of Love and Hosanna. When they’re finally declared man and wife they turn to each other for their first kiss as a married couple – and just like that, they’re a family. Mandy has a seven-year- old son, Kenzo, from a previous relationship and the three will all be living in Vernon’s sprawling home in Kuils River in Cape Town’s northern suburbs. As the guests gather outside the chapel, rose petals in hand, a drone zooms overhead filming footage of the couple as they leave the chapel to a shower of blooms. The proud pair with Vernon’s mom Bernita, Mandy’s son Kenzo and her dad Nigel. They joined the couple at the main table.

Mandy is radiant. “Today I married my best friend,” she says.

When the newlyweds head off to have their wedding pictures taken amid the vineyards on the beautiful estate, guests are offered canapés and make their way to the stylishly decorated reception venue a few steps from the chapel. “The couple asked for simple décor but still wanted something that looked bridal,” wedding planner Annegret Fabricius explains. “They didn’t want anything too formal because they wanted their guests to be able to enjoy themselves.”

The colour scheme is light pink and white with accents of gold and deep red. Photos taken, the newlyweds enter the hall to the sounds of Blurred Lines by Robin Thicke, TI and Pharrell Williams. Then it’s time for speeches. In his toast, Stiaan describes Vernon as a “man of quality, a hard worker who’ll be a good husband to Mandy”. Then it’s Mandy’s dad Nigel’s turn to speak and he welcomes his new son-inlaw to the family. “It’s a new chapter in your lives – always treat teach other with love and compassion,” he says. 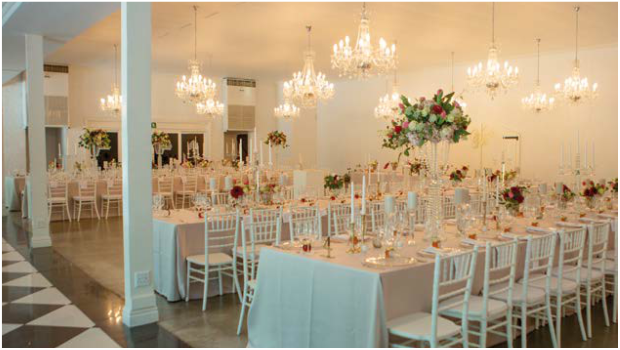 The décor was elegant, simple and beautiful.

Dessert is crème brûlée, malva pudding spring rolls, salted-caramel chocolate brownies and a variety of tarts. The three-tiered wedding cake – made by a friend of Mandy’s, baker Cindy Solomon – is also served with dessert.

Cindy decided on the flavours – the top is lemon and blueberry, the middle is chocolate and the bottom is a mix of vanilla and butterscotch. The cake is covered in flavoured cream-cheese icing and decorated with the same flowers as in Mandy’s bouquet. Toasts made and tummies full, it’s time for some music. The couple opens the dance floor with Stevie Wonder’s Ribbon in the Sky before they’re joined by their happy guests. Vernon and Mandy, who works as an administrator for the Vernon Philander Foundation, aren’t going on honeymoon straight away.

Vernon is about to rejoin the Proteas as they tackle the Australians on their tour of SA but when that’s over they plan to go an island holiday. “And after that we plan to add to our family,” she says. “I’m looking forward to our future together,” Vernon adds.

“The road ahead looks exciting and of course we’ll have kids – we just need to decide how many. “But for now, here we are: Mr and Mrs Philander.

We live in a world where facts and fiction get blurred
In times of uncertainty you need journalism you can trust. For 14 free days, you can have access to a world of in-depth analyses, investigative journalism, top opinions and a range of features. Journalism strengthens democracy. Invest in the future today. Thereafter you will be billed R75 per month. You can cancel anytime and if you cancel within 14 days you won't be billed.
Subscribe to News24
Next on Drum
Waves, mohawks and hairpieces - why male hair extensions are popular