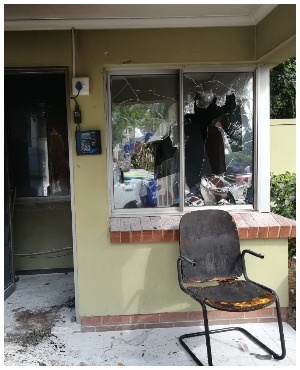 A security room which was torched by students. (Photo: Supplied)

Nine Durban University of Technology (DUT) students were arrested on Wednesday after attempting to set a security guard alight during a violent protest outside the campus on Steve Biko street in Durban.

According to police spokesperson, Brigadier Jay Naicker, a maintenance room as well two security guard houses were set alight before students attacked a security guard at the institution.

“The students attacked a 27-year-old security guard who works at the tertiary institution. They assaulted him, poured petrol on him and attempted to set him alight. He was rescued by his colleagues who witnessed the attack. He sustained severe injuries and was conveyed to hospital for medical attention,” he said before revealing that nine students were then arrested.

“Police were alerted of the attack and due to their swift response, managed to apprehend nine students aged between 20 and 30. They will be charged for attempted murder, malicious damage to property and public violence. They will appear in the Durban Magistrates Court soon. The situation is under control and police officers from Berea SAPS as well as the Public Order Police Unit are at the scene to monitor the situation,” he said.

According to a statement issued by the University, students embarked on the protest following the attack on a first year student, Sandile Ndlovu who was stabbed in the head while studying in a lecture room on the campus as well as the death of another student in residence two days later.

Classes were set to resume on Wednesday following student protests over safety at the university.

The provincial commissioner for KwaZulu-Natal, Lieutenant General Khombinkosi Jula has condemned the violence displayed by students. “As the South African Police Services, we will not hesitate to arrest those who are found to have contravened the law. We reiterate that no grievance can ever justify students breaking the law and endangering the lives of other citizens. We call on students to raise their grievances within the confines of the law,” he said.