Rapper Thulani Ngcobo aka Pitch Black Afro was arrested and convicted of his wife's murder.
Supplied

Shortly after his arrest in 2019, DRUM spoke to those closest to the couple. Here's what they had to say:

He introduced them to each other when they were just teens. At the time his big-haired friend was an up-and-coming rapper and she was an ambitious go-getter who wanted to carve a career in the music industry.

Over the next two decades he watched as the love blossomed between Thulani Ngcobo – his rapper buddy who later found fame as Pitch Black Afro – and Catherine Tricia Modisane, the girl he grew up with in Soweto.

When the lovebirds got married in 1999 in an intimate traditional ceremony, their mutual friend and personal Cupid was there to witness the joyous occasion.

“Thulani met Tricia through me,” he tells DRUM. “Those two loved each other from day one.”

Thulani, he says, “was a little short-tempered” and they had arguments like any other couple but always managed to patch things up. The last time he saw them was over the December holidays.

“I was with them just two weeks ago at the B&B they stayed at in Yeoville,” he says. “We sat and bought pizza and drinks. A week later Tricia invited me to go to Mpumalanga with them for a gig but I couldn’t because I had commitments.”

Yankee, who declined to disclose his surname, says the couple had been staying at the B&B for a few weeks, though he didn’t ask why. They seemed fine during his last visit.

“They seemed like themselves – happy,” he says. “That’s why I was shocked out of my mind to hear he’s the suspect in her murder.”
Yankee

After years of staying out of the public eye the rapper recently dominated news headlines when he appeared in the Johannesburg Central Magistrates Court.

He’s been charged with premeditated murder and defeating the ends of justice after his wife’s lifeless body was found in their room at the B&B. Tricia (41) was found on New Year’s Eve but the circumstances around her death were still not clear at the time of going to print.

Police initially opened an inquest to probe her death but changed it to a murder investigation, police spokesperson Colonel Lungelo Dlamini says. Five days after her body was found they arrested Pitch Black Afro (42) for his wife’s murder.

“The suspect was arrested because of the results that came back from the pathologist,” Dlamini says.

The police wouldn’t reveal anything else about the case but, according to media reports, Tricia was found with bruises on her upper body.

Pitch Black burst onto the music scene in 2003 when his self-titled single, Pitch Black Afro, featured on the Gaz’lam II soundtrack. With his enormous Afro and catchy rhymes he went on to become a huge success and a sought-after stage performer. His future seemed bright but when his third album, Zonke Bonke, didn’t do as well as expected his star began to fade and he dropped out of the limelight. Until now.

He cut a lonely figure when he appeared in the dock at the magistrate’s court. Casually dressed and clutching a white spoti (bucket hat) that hid his braids, he looked down as the charges against him were read out.

He’s unable to afford legal counsel and told the judge he required the services of a legal-aid lawyer. He’ll request bail once he has a legal representative. Before being remanded to custody, the down-and-out rapper sought out his manager, Bheki Mlambo, and handed him a thick folder. He was also overheard telling Bheki to check on his mother.

Speaking to DRUM, Bheki says he’s shocked by his client’s arrest. He’s known Pitch Black Afro for seven years and met Tricia, whom he describes as open-minded, four years ago.

“She was loving, hardworking and a very jolly person,” Bheki says.

“She was always happy, she liked jokes and that made her fun to be around.” She came from a well-rounded family, he adds.

“The minute I met her family, I understood her a bit more. They are full of love, very warm-hearted people. It was clear to me she had gotten all those values from home. She was always working with her partner – they were a team.”

Tricia had always had Pitch Black’s back – even during his darkest days when the rapper was addicted to drugs and booze.

The last time the couple spoke to DRUM, Pitch Black said he wanted the world to know if Tricia hadn’t been in his life he’d have given up on music long ago.

“I stutter when I speak, and Tricia was the only one who understood me. Unlike my other friends, she never laughed or made fun of me, instead she was very patient with me.” (Is Pitch Black back on track? 31 October 2013). In 2013 she told DRUM that she stood by her husband in the good times and encouraged him through the bad times because she knew “he was born for this industry”.
Drum DRUM 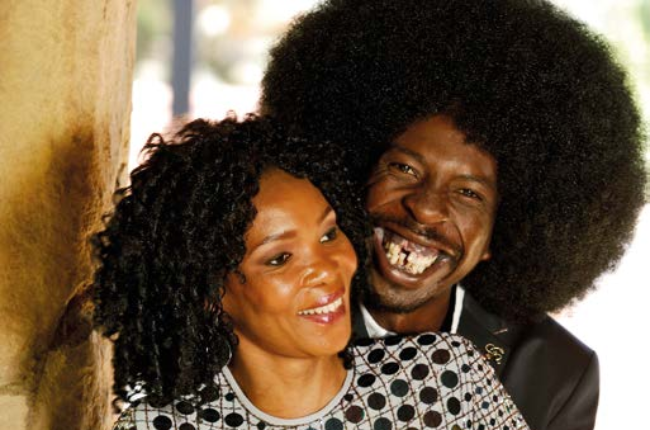 Pitch Black Afro and Tricia Modisane were together for 23 years.
Supplied Supplied

He made a comeback with his album Int’Emnandi in 2014 but Pitch Black never quite managed to recapture the glory days of his early career. Tricia stood by him through the good times and the bad.

“There were times when things didn’t go well musically for Thulani but I encouraged him because I knew he was born for the industry,” she told us at the time.

“Before Thulani was successful we used to knit hats and sell them. We’ve always been able to make a plan to make ends meet. To this day we’re still hustling,” she said.

Tricia, who worked as a booking agent and DJ, was responsible for her husband’s brand and stage name. He was known as Black Afro when she met him and Tricia told us it was her idea to extend it to Pitch Black Afro: “Since that day the name and his hair has become his trademark.”

To honour her memory and the role she played in the music industry, her family and friends hosted a tribute concert at her home in Meadowlands, Soweto.

The private send-off featured performances from artists who had worked with Tricia, while family and friends paid tribute to her.

“The funeral was reviving and the memorial service was amazing,” says Ntsika Rise, who performed at the event.

Tricia and Pitch Black’s family have asked for privacy during their mourning and refused to comment on her death or his arrest, which has put the spotlight back onto domestic abuse and femicide.

“How many times, in just one day, do we hear about women and children being killed and/or raped? Even little babies are victims,” says Khanyisani Vilakazi, a founding member of Vuka Mzansi, an NGO that in part aims to create awareness about the long and short-term impact of all forms of abuse.

Khanyisani, who attended Pitch Black Afro’s court appearance, says he wasn’t friends with the rapper and his wife but he knew them and saw them around Yeoville where his organisation is based.

“The case is still being investigated. We don’t know what really happened and we’re all waiting to find out,” he says, “but we, as Vuka Mzansi, need to make sure the justice system is always fair – we need to hold it accountable. We want justice to be served for everyone.”

We live in a world where facts and fiction get blurred
In times of uncertainty you need journalism you can trust. For 14 free days, you can have access to a world of in-depth analyses, investigative journalism, top opinions and a range of features. Journalism strengthens democracy. Invest in the future today. Thereafter you will be billed R75 per month. You can cancel anytime and if you cancel within 14 days you won't be billed.
Subscribe to News24
Related Links
How to help victims of gender-based violence
Mrs Universe South Africa on how she found the courage to leave an abusive relationship
A mom and daughter team use theatre to lift the veil of silence on rape
Next on Drum
‘I couldn’t drink after seeing dead bodies’ – eyewitnesses share harrowing Enyobeni tavern accounts