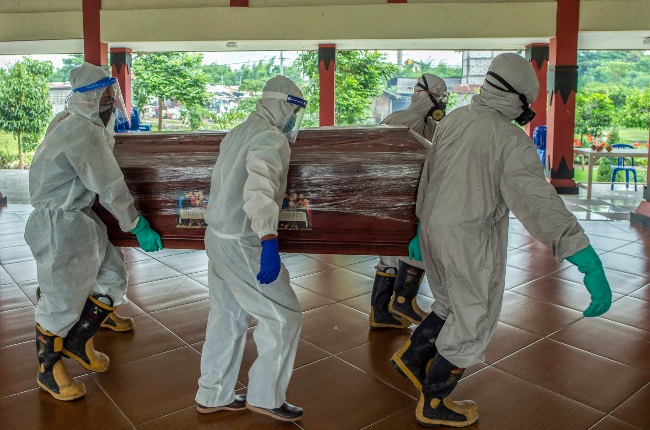 It's been a matter of contention. Grieving families have been traumatized when seeing their loved one's final resting place all wrapped up in plastic.

The dead would suffocate, they said, and some talked of dreams where their loved ones asked to be unwrapped.

But week after week, bodies and coffins were wrapped in plastic with biohazard stickers attached on them, leaving no one in doubt of the cause of death.

But now, the department of health has clarified protocols that need to be followed for funerals of Covid-19 victims.

They don't need to be wrapped in plastic, the department says.

In a statement, departmental spokesman Popo Maja says the department met with stakeholders recently to clarify any uncertainties.

“The Department of Health has issued health directions on the management of human remains that died of COVID-19 that prescribes measures to be implemented. These directions do not prescribe the covering of coffins with plastics, use of biohazard stickers nor wearing full PPE by funeral directors or sanitising of the graves or clothes of people attending the funeral as this is unnecessary,” he says.

Read more: Working in a funeral parlour – 'Nothing could have prepared me for a pandemic'

Popo further says there is no evidence that the virus can be passed from the body of a deceased to a living person.

“The revised guidance from World Health Organization indicates that transmission of SARS 2 from a human remain to people who are alive has not been proven therefore the Department is in a process of reviewing the requirement of a body bag for burial to align to current evidence. Human remains can be buried either in a body bag or be wrapped in a shroud or blanket as the case may be. The body bag can be used for medical reasons or the family may decide to bury using these body bags,” he says.

“The human remains should only be conveyed to the decease's home on the day of the burial and viewing is only allowed under control environment within a mortuary or funeral undertakers premises. These measures are still necessary to control the spread of COVID-19 amongst mourners.”

The department’s statement comes after many South Africans complained of inequality following the funeral of Minister in the Presidency Jackson Mthembu. His coffin was not wrapped even though he died of Covid-19 related complications.

South Africans took to social media to complain that they had buried their loved ones in wrapped coffins, some were not allowed to see them and others had bodies go straight to the graveyard and funeral services were conducted without the coffins being there.

#VoetsekRamaPhosa
After jackson Mthembu's funeral it was declared unnecessary to bury someone with his coffin wrapped in plastic let's hope for more of these ANC members to die so much will change ?? pic.twitter.com/IkJaKkdzqj

#JacksonMthembu was supposed to be buried Thursday or Friday because he died of Covid19. From mortuary straight to the graveyard and his coffin must be covered with plastics like they've done to other families.

Why Jackson Mthembu's coffin was not rapped with plastic like our grandmothers, grandfathers, mothers, fathers, sisters, brothers who died due to covid19 related illness??????

There have been reports from the Eastern Cape that people are exhuming bodies of loved ones and removing the plastic wraps as they believe they are 'suffocating'. Popo says exhumations can only done with the permission of the municipalities or the courts.

“Exhumation is a process of removing human remains from a grave and is regulated under the regulations governing the management of human remains promulgated on 22nd May 2013. Members of the public wishing to exhume human remains must do so following the provisions of the above-mentioned legislation. Therefore, illegal exhumation of human remains is prohibited and is punishable by law.”

We live in a world where facts and fiction get blurred
In times of uncertainty you need journalism you can trust. For 14 free days, you can have access to a world of in-depth analyses, investigative journalism, top opinions and a range of features. Journalism strengthens democracy. Invest in the future today. Thereafter you will be billed R75 per month. You can cancel anytime and if you cancel within 14 days you won't be billed.
Subscribe to News24
Related Links
WATCH | Meet the frontline workers who prepare Covid-19-infected bodies for burial
HE GOT COVID FROM FUNERAL AND DIED!
Funeral customs entrench patriarchy
Next on Drum
‘I couldn’t drink after seeing dead bodies’ – eyewitnesses share harrowing Enyobeni tavern accounts